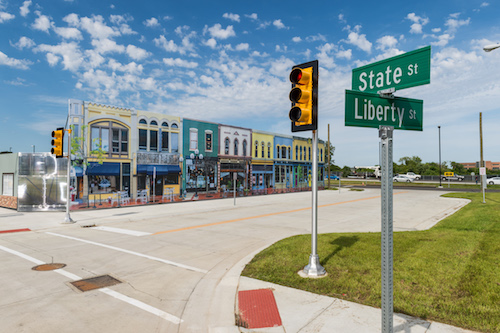 Mcity is a purpose-built facility for testing connected and automated vehicles and technologies under controlled, realistic conditions. Image Courtesy of University of Michigan.

Want to get more mileage out of autonomous vehicle testing? Mcity, which bills itself as one largest test sites for driverless cars, is advocating for a new approach that combines augmented reality (AR) and real-world driving scenarios as a highly effective roadmap for the rigorous testing of autonomous vehicles, according to a white paper released late last year.

The paper, penned by Henry Liu Ph.D., professor of Civil and Environmental Engineering at University of Michigan’s College of Engineering, and Yiheng Feng, Ph.D., assistant research scientist at the U-M Transportation Research Institute, makes the case for a hybrid test process that combines simulated vehicles and traffic scenarios with real-world vehicles to create a faster, more efficient, and cost effective approach to testing the new genre of cars.

Taking a page from videogames, the researchers created a scenario where they can instantly generate traffic safety situations that might only happen once in millions of miles of real-world driving. By projecting AR scenarios to on-board wireless communications devices accessible by real-world test drivers on the Mcity track, test teams can log many more miles than traditional road testing, for less cost, and with far better safety, the researcher said.

One of the biggest challenges to the widespread adoption of driverless vehicles is establishing the technology as safe and trustworthy—a feat that requires a rigorous and extensive system of testing. Unlike traditional vehicles, which are tested for proper operation and for how to protect occupants from harm in the event of a crash, driverless vehicles are held to a different standard. Self-driving vehicles must be able to avoid crashes all together, which exponentially expands the number of potential crash situations, including those considered rare. In fact, according to the National Highway Traffic Safety Administration (NHTSA), serious accidents occur every 530,000 miles of driving while a crash involving a fatality happens once in every 100 million miles of driving.

That’s where the addition of AR test capabilities come into play. In addition to its 32-acre testing site, which includes 16 acres of roads and traffic infrastructure, Mcity is now broadcasting computer-generated virtual traffic elements to vehicles operating on its roadways using a patent-pending, secure wireless technology, the research paper stated. The test platform generates a virtual vehicle that creates some sort of dangerous situation and broadcasts it to the physical test vehicle in real-time using Dedicated Short-Range Communications. The test platform also uses data from the vehicles’ sensors and controllers to make adjustments to the simulated traffic scenarios, and researchers can measure how the physical test car responds to these scenarios, the paper explained.

“This creates a sophisticated loop of events, responses, and reactions circulating between the test vehicle, physical test track components, and the simulated world of traffic and events that is layered over the real-world test car and track,” the researchers explained. 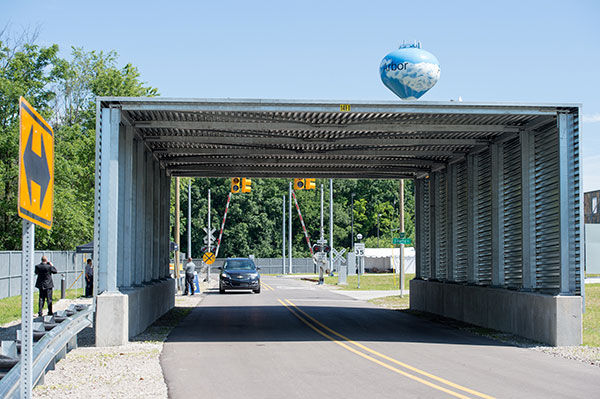 A highway overpass is simulated at Mcity by a tunnel that blocks vehicles from wireless and satellite signals. Image Courtesy of University of Michigan.

Autonomous vehicle testing has primarily been done through computer-generated simulation, on-track testing in a closed course like Mcity, or on public roads. Most of the public is wary of on-road testing due to potential dangers—the white paper reported 26 crashes during self-driving car tests on public roads in California, and last year, an Uber autonomous vehicle hit and killed a woman in Arizona.

Professor Liu and Researcher Feng claim their AR approach offers the safety of a closed testing facility with the real infrastructure and added complexity of computer-generated simulations. The combination creates an infinitely adaptable environment that allows test vehicles to interact with computer-generated virtual traffic in an array of situations with little to no risk and at reduced costs compared to other test approaches.

“To get to a complete test environment, self-driving vehicles need to interact with background traffic and other elements encountered every day by drivers on public roadways,” the report authors said. “Unless the driverless test vehicle encounters and responds to real traffic, the test scenarios that can be created in simulation labs and on closed tracks are constrained in proving the reliability of driverless cars.”

You can read the entirety of the report here.