Desktop Metal to Acquire ExOne: What Does the Deal Mean?

Two of the leading hardware makers in metal 3D printing—Desktop Metal and ExOne—are about to become one.

Earlier this month, Desktop Metal announced its plan to acquire all of ExOne's outstanding shares and common stocks, in a deal valued at $575 million.

With its origin dating back to 1995, ExOne supplies additive manufacturing (AM) systems that use binder jet technology. Its machines print in metal, sand, ceramics, and other materials.

With a corporate headquarter in the U.S. and branch offices in Europe and Asia, ExOne counts automaker BMW Group, Daimler, and Ford; and simulation software maker Siemens, Ansys, and Altair among its customers. 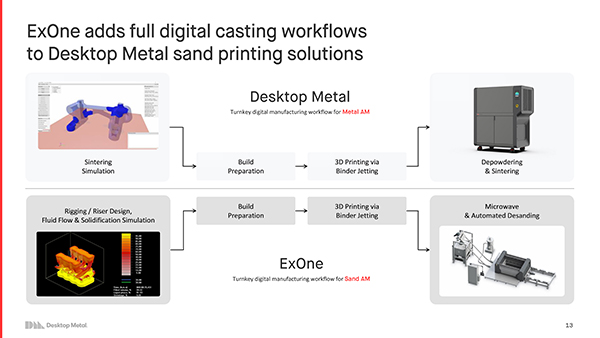 Ric Fulop, Founder and CEO of Desktop Metal, said, “We believe this acquisition will provide customers with more choice as we leverage our complementary technologies and go-to-market efforts to drive continued growth. This transaction is a big step in delivering on our vision of accelerating the adoption of additive manufacturing 2.0.”

Like Desktop Metal, ExOne also provides mass-production, mid-volume, and turnkey metal AM systems. The merger reduces competition between the two. It also gives them a chance to integrate ExOne's systems with Desktop Metal's frontend software and furnace technology.

“By combining ExOne’s direct sales force with Desktop Metal’s global distribution network of over 200 channel partners, the combined company will enable broader access to additive manufacturing solutions,” according to the announcement.

Arjun Aggarwal, Chief Product Officer, Desktop Metal, pointed out, “There are significant opportunities to optimize our combined manufacturing and supply chain efforts to yield margin improvements over time alongside product enhancements that will allow us to attract more customers.”

Since certifying and qualifying materials is a big part of the push for enterprise adoption of AM in heavily regulated industries, the combined company can reduce the requirements and accelerate the rate at which it introduces new materials to the market, reasoned Aggarwal.

Desktop Metal went public at the NYSE in December 2020 under the stock symbol DM. Markforged, another metal AM (additive manufacturing) system maker, also went public recently under the symbol MKFG.