Engineering power isn’t just in the workstation; the right monitor and mouse also make the difference.

Engineering power isn’t just in the workstation; the right monitor and mouse also make the difference. 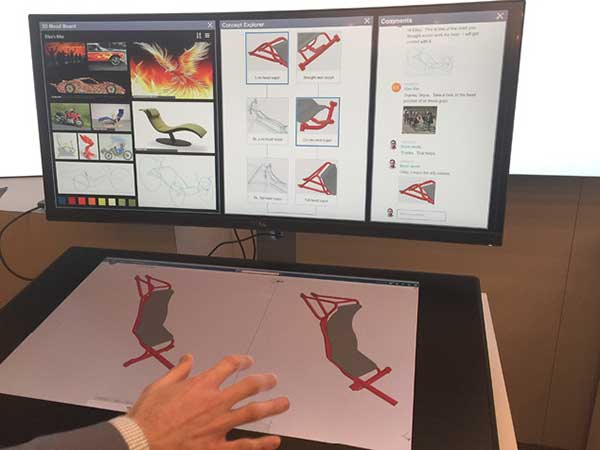 Using SolidWorks with a Dell Canvas. Image courtesy of Dassault Systemes and Dell.

Engineers use workstation-class computers because they are more reliable, more durable and more suitable than enterprise or consumer systems. After spending time to find the right specs for the workstation internals (RAM, CPU, graphics processing units and storage, many times the externals are an afterthought.

Productivity improvements are not limited to computational factors. In conversations with engineers, workstation vendors and peripheral manufacturers, Digital Engineering learned what input and output devices (peripherals) provide the most benefits to engineering and design workflows.

“Our studies have found that in some cases productivity can be increased by 50% or more with multiple monitors,” says Jon Peddie, president of Jon Peddie Research (JPR) and an expert on the use of graphic technologies for productivity. “Realism and the details revealed with more display area not only improve understanding in a visualization, but increase enjoyment. It’s tiresome to have a constrained view of the world; it’s like looking at the world through a tube or a pair of binoculars.”

“Engineers would buy a 4K monitor but their CAD program would not scale elements properly to support the monitor,” adds Payne. Because 4K monitors offered quadruple the resolution of the previous generation, but the software wasn’t supporting the increase, drawings and models would appear one-fourth the size the user expected. But now, all CAD vendors are directly supporting 4K and the results are spectacular.

“Once you use 4K for CAD, it is impossible to go back to [high definition],” says Payne. “Everything looks so much sharper, diagonal lines in particular.

“Six milliseconds is nothing in CAD use,” notes Payne.

Orbital Computers stocks several monitors for its customers. Payne says his favorite at the moment is the BenQ PD3200U. It offers factory-calibrated color accuracy with a custom report included with each monitor shipped. A built-in CAD/CAM mode boosts contrast for wireframe and solid modeling work. “It is a real top-of-the-line monitor,” he says. 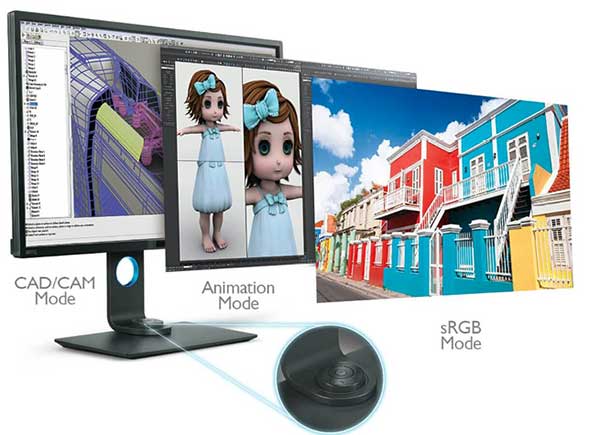 Payne says he is often asked by customers if a 55-in. 4K television would be a good monitor for engineering.

“TVs have input lag,” Payne says. “They are not built for interaction but for streaming signals. Plus, the larger size causes eye fatigue.” For daily work, Payne says a 24-in. HD monitor is better than a 55-in. 4K television. “The 4K TVs would be OK in a conference room, but not for dedicated one-person use.”

Everyone we talked to about a mouse said the same thing: the SpaceMouse line of 3D mice from 3Dconnexion are the industry standard. 3Dconnexion started as a division of Logitech and eventually then spun out as a separate company, and now offers a line of input devices designed specifically for creators of 3D content, primarily CAD but also media and entertainment. 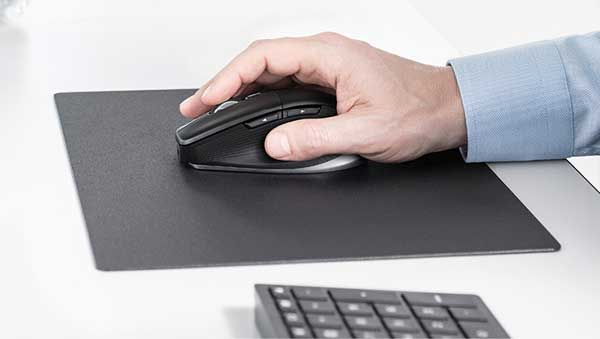 The 3DConnexion SpaceMouse Professional can be customized in software to support various CAD programs. Image courtesy of 3Dconnexion.

The latest addition to the SpaceMouse line is the CAD Mouse Pro Wireless.

“It took a while to get the word out about it,” says Ken Denton, senior sales manager at 3Dconnexion. “But now they are selling like crazy.”

The entire line includes models that are stationary with a variety of programmable function buttons, as well as the more traditional moving mouse, designed for ease of use with 3D content creation.

“We think the user experience is intuitive,” says Denton. No tutorials ship with SpaceMouse products, but 3Dconnexion will do free onsite training when a company makes a bulk purchase. When a driver for a specific piece of software (such as SolidWorks) is downloaded, there is a brief tutorial specific to the software.

The learning curve is “generally a couple of hours to be good and a few days to be great,” Denton says. The software that runs a SpaceMouse knows how to automatically adjust the center point when a model moves. “Zoom a model and then release. The cursor automatically moves to the center of mass,” Denton adds.

“A SpaceMouse Enterprise with map keys for Creo, for example, transforms the workflow,” says Denton.

In 2018 3Dconnexion commissioned the renowned Fraunhofer Institute for Industrial Engineering to study the ergonomics of using SpaceMouse products in CAD applications. The Institute found that users made 29% fewer hand movements, allowing for a 28% increase in overall productivity, compared to the use of a traditional mouse. (For DE’s report on the study, click here.)

Both Display and Input

One device mentioned often by those we interviewed is a display and an input device. The Dell Canvas was a surprise announcement at CES 2017, and has steadily grown a following that goes beyond the users of Dell workstations. It looks like it could be a tablet computer (think Microsoft Surface Studio) or a designer’s input tablet (think Wacom Cintiq).

Dell recommends the 27-in. Canvas sit at a 10° angle (a hinged support is built in) and horizontal on the desk in front of a larger monitor. The engineer then uses Canvas for input and as the main display; the large monitor becomes an extension of the visual workspace.

The Canvas uses two input devices, a sketching pen and a round spinning dial. The dial is placed on the screen; in use it displays various menus (such as a color wheel) when required. The dial is configured in Windows 10 using Wheel Settings; users can also create custom settings. Any application that works with Microsoft Surface Dial also works with the Canvas dial, as both use the same Windows software functions.

The sketching pen technology is licensed from Wacom. The pen is lightweight and requires no batteries. A side button on the Canvas can be programmed to convert the pen into an eraser.

The Dell Canvas can be used with any Windows 10 application, even if a special driver is not available.

“Increasingly as VR becomes a regular part of the engineer’s workflow, a VR headset becomes valued for both design and simulation,” notes John Ludwig, the product manager at HP for the HP Reverb. The Reverb is the headset and a unique backpack computer to run it, designed for enterprise applications. The headset offers 2160x2160 resolution in each eye.

Finnish startup Varjo Technologies is making waves with its XR-1, a video pass-through MR headset that delivers photorealistic image quality with integrated eye tracking. Unlike AR, where a camera image is combined with computer graphics overlay, the Varjo XR-1 generates the full field of view to combine reality and graphics. Cameras on the headset digitize the world in real time. The image is then multiplexed inside a GPU and the virtual content is then displayed in the headset. 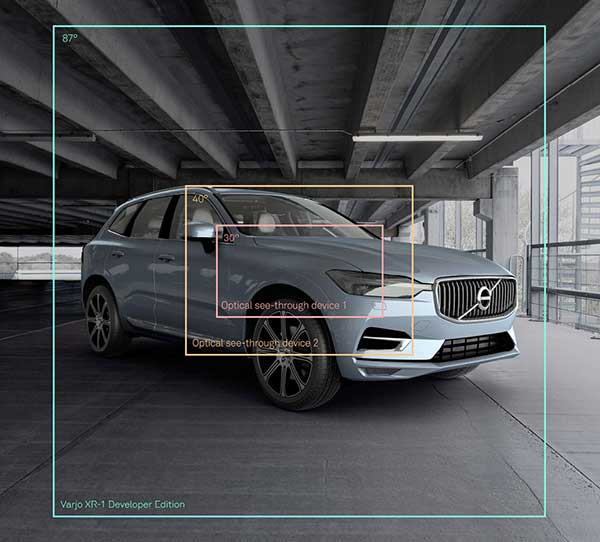 A comparison of the field of view on the Varjo XR-1 compared to competitive devices. Image courtesy of Varjo Technologies.

Varjo says latency is <15 ms, which the company says is fast enough to make it a true “reality” device.

“XR-1 brings all the convenience of seeing your body as well as the real world around you and being able to look at your colleagues while designing a virtual object or environment,” says Urho Konttori, chief product officer and co-founder of Varjo. “The XR-1 can show mixed reality with true-to-life fidelity you can only achieve using video-pass-through. Lifelike mixed reality is quite literally impossible to achieve with optical-see-through systems.”

Volvo Cars was one of the first manufacturers to use the Varjo XR-1 to test-drive virtual car designs on the road. By adding virtual elements to the interior of the car, Varjo says designers are able to perform design studies before a car is built. Volvo engineers have also used the XR-1 to test drive real cars with the driver wearing the headset.

“With Varjo XR-1, we can start evaluating designs and technologies while they are literally still on the drawing board,” says Henrik Green, chief technology officer at Volvo Cars. “Instead of the usual static way of evaluating new products and ideas, we can test concepts on the road immediately. This approach offers considerable potential cost savings by clearing bottlenecks much earlier in the design and development process.”

The HTC Vive Pro virtual reality headset seems to be gaining the most traction as an engineering and collaboration tool. Dassault Systèmes is working with HTC to use the headsets as a cost-effective replacement for CAVE room-size viewing rooms. PTC Vuforia software is used for manufacturing floor training. But at the engineer’s desktop, the use of VR is still mostly limited to preparing VR versions of models.

For more on the use of virtual reality in engineering, click here.