A New King is Crowned 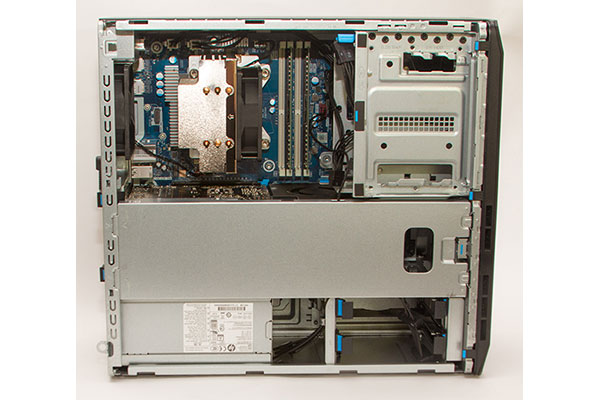 HP bills the Z2 as “the world’s most powerful entry workstation.” When we reviewed the previous version (Digital Engineering February 2022), we concluded that it was entry level in name only, as the G8 version proved to be a great-performing workstation at an amazingly affordable price. The new version turned out to be even better, costing less than last year’s model, while delivering improved performance. 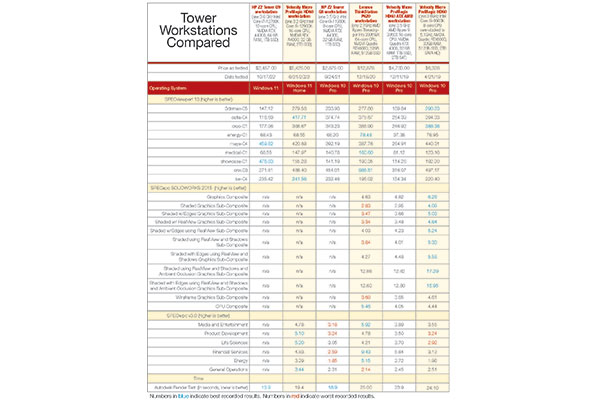 Outwardly, the new HP Z2 Tower G9 looks virtually identical to the G8. The system comes housed in the same charcoal gray case with a small HP logo and Z2 badge discretely centered at the top and bottom of the front panel, respectively. The size is also unchanged—6.68x15.5x14.12-in. (WxDxH)—and the system we received weighed just 15 lbs. The front panel includes a small power button, a universal audio jack, four USB Type-A ports and space for an optional USB Type-C port ($14) and an SD card reader ($19). These are flanked by a pair of accessible drive bays, while the lower half of the front panel consists of a perforated screen hiding the air intake.

The rear of the case is also the same, with a pair of audio jacks, six more USB Type-A ports and an RJ-45 jack for the integrated gigabit LAN. There are also two DisplayPorts that connect directly to the integrated Intel graphics, although these are disabled by default when a discrete graphics card is installed. A recess near the top serves as a handle to move the computer.

As expected, HP’s toolless chassis makes it extremely easy to access the very well-organized interior. While the mechanism for removing the side panel has changed—the G9 includes an optional system that detects if someone has tried to open the case—once opened, the interior also looks identical to the G8. 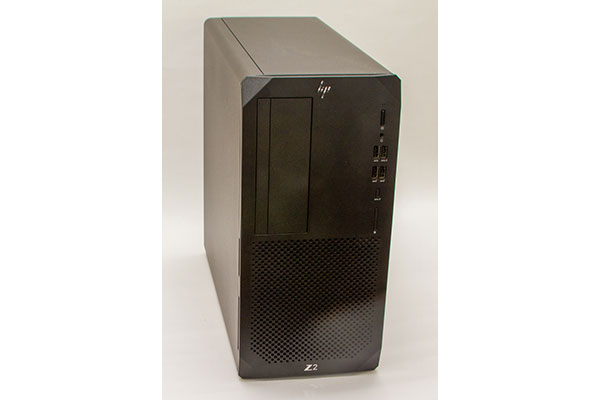 Unlike last year’s G8 system, however, there was no additional cooling fan mounted to the stiffener, although mounting cutouts remain. In the upper rear portion of the case, a large phase change heat sink with its own fan covers the CPU, with four adjacent unbuffered dual in-line memory module (UDIMM) memory sockets easily accessible. The power supply is positioned in the lower rear portion of the case. 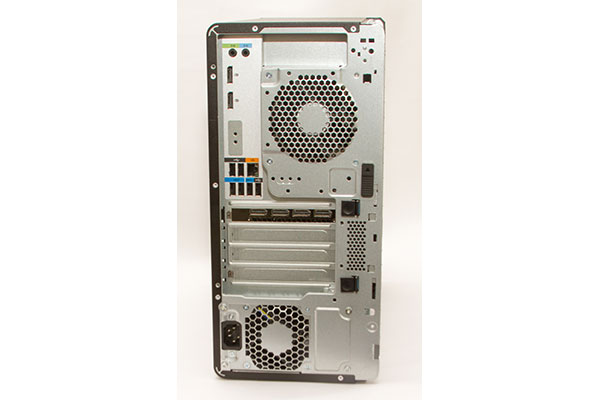 The HP Z2 Tower G9 workstation supports up to 128GB of RAM, using 32GB memory modules. It also offers three M.2 storage slots and up to 48TB of storage. At $1,004, the base configuration comes with a 2.5GHz 6-core Intel Core i5-12400 CPU with integrated Intel UHD graphics, 16GB of RAM, a 256GB M.2 SSD and a 350-watt power supply, with Windows 11 Pro pre-installed. The addition of a discrete graphics processing unit (GPU) and more powerful CPU require a higher-capacity power supply; our evaluation unit came with a 700-watt power supply unit, which added $74. 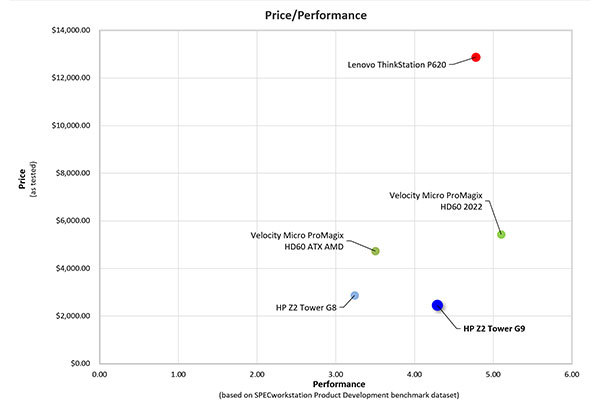 Though Intel is no longer focusing on Xeon, error-correcting code (ECC) memory is now available for most of the 12th-generation CPUs offered on the HP Z2 Tower G9. Our system included 64 GB of DDR5-4800MHz standard memory, installed as a pair of 32GB UDIMMs, adding $820 to the price.

Storage options include solid-state drives (SSD) ranging from 256GB to 4TB, as well as 2.5-in. hard drives from 500GB to 12TB, and redundant array of independent disks (RAID) arrays are supported. Our evaluation unit came with a single 1TB PCIe M.2 SSD, for an additional $365.

HP also offers a choice of discrete GPUs from AMD and NVIDIA, and the Z2 Tower G9 supports up to two GPUs. The system we received included an NVIDIA RTX A4000, installed in one of the PCIe x16 slots. This virtual reality-ready GPU, based on NVIDIA’s GA104 graphics processor, comes with 16GB of GDDR6 ECC memory and features 6144 compute unified device architecture (CUDA) cores, 192 Tensor cores and 48 RT (raytracing) cores. Its 256-bit interface yields a bandwidth of 448 GB/second while consuming 140 watts. Although it is a single-slot card, it does require additional power via a six-pin auxiliary connection. The RTX A4000 provides four DisplayPorts, which added $1,188.

As usual, we put the new HP Z2 Tower G9 through our standard battery of benchmarks. But since the workstation came with the Windows 11 Pro operating system pre-installed, we were unable to run the complete set of benchmarks.

On the SPECviewperf benchmark, which focuses on graphic performance (and is officially supported under Windows 11), the HP Z2 Tower G9 delivered top scores on several of the datasets and was near the top on the others.

Because the SPEC workstation performance benchmark is not yet officially supported under Windows 11, the system was unable to complete some of the tests in this very demanding benchmark. It did score quite well on those portions of the benchmark that could be completed, including the Product Development workload, on which we base our price/performance calculations.

On our AutoCAD rendering test, which clearly shows the advantage of fast CPUs with multiple cores, the HP Z2 Tower G9 averaged 15.9 seconds, the best result we have ever recorded.

Throughout our tests, the HP Z2 Tower G9 remained cool and quiet, with fan noise barely ever audible over the ambient background sound level. HP rounded things out with a 109-key USB keyboard and USB three-button mouse. The keyboard proved to be the only element of this system we did not like, due to its terrible feel, with extremely short key travel and tiny function keys.

Although Windows 11 Pro comes preloaded, customers can opt for Windows 10 Pro as a $2 downgrade. Linux is also available. Like other HP professional Z-series workstations, the HP Z2 Tower G9 is independent software vendor-certified for professional applications from Ansys, Autodesk, Dassault Systèmes, PTC, Siemens and others. The system is also backed by a three-year warranty (with extended support options available).

As tested, our evaluation unit priced out at $2,457, making this a great-performing workstation at an amazingly affordable price. In our opinion, the HP Z2 Tower G9 claims the title as the new price/performance leader and should meet the needs of a majority of DE readers.