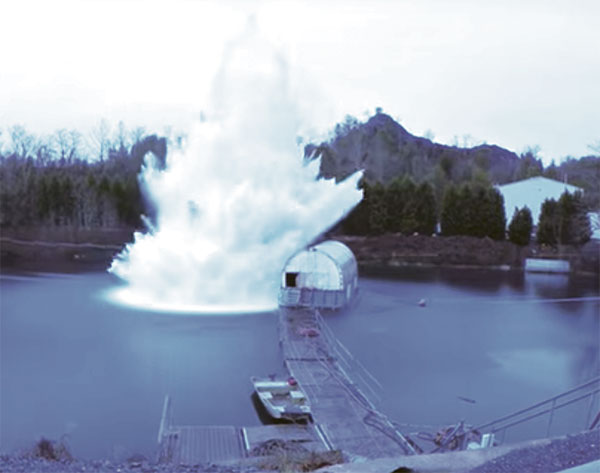 A ruggedized rack-mount computer system inside the hut is being subjected to 40Gs of shock in a military field simulation for the U.S. Navy. Four separate blasts 24 ft. deep simulate an attack by a ship or submarine. Image courtesy of CP Technologies.

Consider the following situation. Designers of a new mass transit rail system want to use the latest internet of things (IoT) technology to gather, process and interpret all kinds of real-time data beyond railcar logistics, such as vibration and shock, environmental conditions and audio/video monitoring. An IT-based analysis recommends all sensors and other on-site monitoring equipment need the support of PC-class devices in the field, not only back in the office. Where do you buy computer equipment that can monitor so many inputs and withstand field deployment?

There is nothing new about using computers and other technical equipment in remote or harsh environments. Oil and gas, military, and construction are three of many markets where commercial off-the-shelf (COTS) products cannot offer the reliability, durability or technical specs required. Additionally, a new product paradigm based on distributed autonomy is emerging that will offer new challenges to remotely deployed IT hardware. Co-driving and self-driving automobiles, drones, semi-autonomous robots and many more new products will subject their electronics to the rigors of life outside the office 24/7.

Currently, the engineering thought leadership in ruggedized computer equipment is coming not from the traditional computer hardware vendors or engineering software vendors. Instead, it is coming from component manufacturers who specialize in the cases, housings, racks, external cabling and other parts that protect and support the computer in harsh environments.

One organization in this growing field is CP Technologies, known until recently as Chassis Plans. CP has been a provider of ruggedized computer equipment for industrial and military applications for 20 years. “Over the years, some aspects of designing ruggedized computers using COTS components have remained the same, while other areas have greatly changed,” says Steve Travis, a co-founder who is now chief operation officer of CP Technologies.

Travis credits the accumulation of a “vast design library” along with working closely with customers on initial design of new products to its success as a manufacturer of ruggedized computer equipment. “We hear ‘we need a rugged computer’ and to us that is like ‘we need a tire,’” says CP Technology CEO Mike McCormack. Because there are so many environmental variables and performance specifications, the first step is to carefully define the project.

“We do the usual simulation and analysis routines, including flow simulation,” adds Drew Castle, a mechanical and thermal design engineer at CP. “CAE gives us the 10,000-ft. view, but we see more value in physical testing. We use CAE on the front end.” 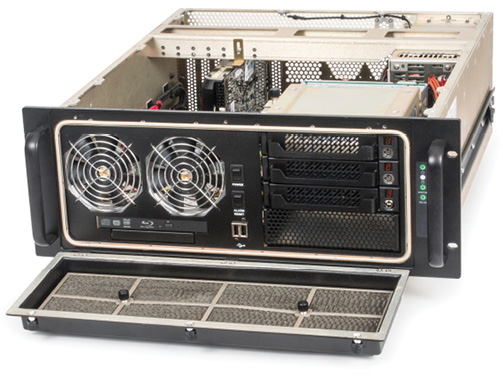 A ruggedized chassis for a new workstation computer to be deployed by the U.S. Navy. Image courtesy of CP Technologies.

Travis describes one recent project as typical workflow for a CP project. The U.S. Navy wanted new 4U computer workstations that could withstand a shock from a nearby blast. The MIL-S-901D Grade A specification covers the physical circumstances of the event. To meet the Navy’s needs, CP had to build an enclosure for a COTS computer workstation that would continue to operate during and after the blast and maintain structural integrity without having any pieces or parts come loose from the system that could injure personnel within the area.

“Utilizing designs that had been previously tested as well as field deployed gave us a great starting point,” says Travis. Next, CP engineers determined which, if any, components require additional reinforcements and components that need further stabilization. They also did a review of cable routing to ensure there were clean cabling paths to prevent cable tension and chafing, and to ensure proper air flow. Internal shock isolators were added at strategic locations to protect sensitive equipment.

CP has published a video of the “High Impact Shock Barge Test” required by the U.S. Navy as part of the certification of the new rack-mounted workstations (see video at top of article). Four separate blasts were fired, 24 ft. deep, spaced 20 to 40 ft. from a barge, to generate 40Gs of shock.

Recent research sponsored by the U.S. Department of Energy shows significant costs are incurred by the practice of always doing one-off ruggedized equipment design. The case study involved measurement equipment for third-party verification missions, but the results are applicable to all ruggedized product design. “The cost of implementing new equipment technology is often the prohibiting factor in actively pursuing new technology,” the report states.

Historically, verification technology was developed in the early stages of design by safeguards researchers for a specific governing authority or field operator. As a result, the design of the equipment was usually narrow in scope, and did not consider forward compatibility or other potential uses.

The study offered a set of key design considerations, including:

Rugged design is an engineering issue for companies that supply electronics to harsh environments, but it is an operational issue for most manufacturers. Tablet computers have been slow to appear on the factory floor because most are not designed for use in a factory setting.

MobileDemand is a specialty manufacturer of ruggedized tablet and notebook computers. They build ruggedized white label Windows tablets, rugged cases for iPads and rugged computer/enclosure bundles for Microsoft Surface Pro 2-in-1 computers. They added tablets after the introduction of the iPad in 2009, when customers came to them with stories of trying—and failing—to use tablets in factory settings.

Once MobileDemand got a few years of experience under their belt selling tablets for manufacturing environments, they commissioned a study comparing the use of consumer-grade and ruggedized mobile devices. Findings include: