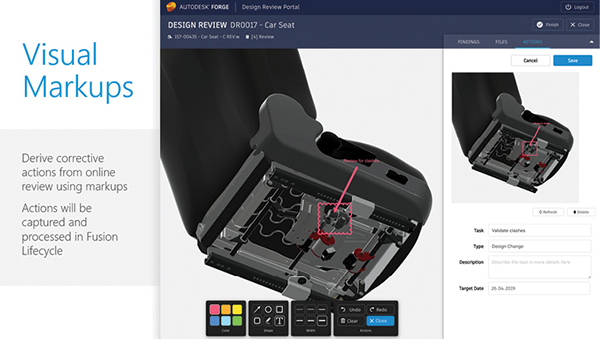 For years, email was the de facto, informal information exchange mechanism for the design team at MBX Systems, a systems integrator providing bespoke computing hardware and software solutions for companies across a host of industries. Sometimes the need was to quickly confer on a product design document or to clarify a question about supplier pricing. In either case, the engineering team was hungry for a way to fire off quick messages to multiple groups, both internally and to outside parties.

“We needed to compartmentalize communications in a way that wasn’t just a series of disparate phone calls and emails between person A and B, or person C and D,” says Justin Formella, chief strategy officer for MBX. “There were these long email strings that weren’t coordinated and weren’t necessarily inclusive of all the people who had the relevant information.”

MBX found the solution to its communications problem with Slack, a cloud-based collaboration hub, which integrates a range of social capabilities such as instant messaging, the ability to share files, video chats and screen sharing. Slack, along with similar offerings like Microsoft Teams, have become popular enterprise collaboration hubs and are now starting to find their way into software and more recently, hardware engineering circles to help promote more informal interactions among team members.

“Traditional PLM (product lifecycle management) is great at putting together defined digital processes and change management processes, but increasingly, engineering changes are really enterprise changes,” notes Peter Thorn, CEO of Cambashi, an analyst and consulting company focused on engineering software and manufacturing. “It’s not just engineers looking at the functions of the device, but it’s the procurement people thinking about materials and suppliers or manufacturing people considering manufacturing issues. The social element creates a kind of oil that lubricates the process. It’s a way people can be integrated in an easy and direct process.”

Yet while social collaboration platforms like Slack help advance the product design and development process, they also have the potential to create another siloed information source if not properly integrated or built directly into the core product lifecycle management (PLM) foundation, many experts contend. Ad hoc conversations or informal and impromptu design sessions that take place in a Slack channel without integration with PLM are disconnected from the context of other product-related decisions and also run the risk of being lost or left out of the official product record.

“If you’re doing ad hoc communication in a disconnected environment, you are collaborating, but you’re not capturing what you’re collaborating,” says Bill Lewis, director of marketing for Teamcenter at Siemens PLM Software. “You don’t get the benefits if it’s not connected to the PLM system.”

At MBX, direct integration into a packaged PLM platform isn’t a requirement, thus the company’s ability to turn to Slack for their ad hoc communications needs. The company, given its need to manage hundreds of highly variable bills of materials (BOMs) for clients, opted out of an off-the-shelf PLM approach in favor of building its own sophisticated configuration system, bolstered with Slack, which serves as a centralized communications channel for projects.

Integration with its core enterprise system is accomplished through Slack notifications, which notify engineers when a party needs to sign off on something or if there’s a new engineering change request entered into the system.

“Right now it doesn’t matter that it’s not a core capability of our [configuration management] system,” Formella says. “Slack specifically notifies people that they have tasks they need to complete … and lets everyone participate in the context of the specific product they are building.”

The downside: There can be information overload if people aren’t precise about creating channels and including the appropriate parties. “Sometimes it’s like drinking from a fire hose—people participating in many projects will have a lot of information to digest,” Formella explains.

Siemens PLM Software is seeing growing demand for social collaboration capabilities from its engineering community in search of flexible and spontaneous communications beyond the prescribed workflows supported by a PLM system, according to Lewis. A survey conducted at its recent user conference pegged adoption of such systems in the ballpark of 20%, Lewis estimates, primarily among software development teams that are actively embracing agile practices.

Rather than build its own internal capabilities, Siemens PLM Software is working on a new collaboration service that has integrations between Teamcenter and Slack and Microsoft Teams to be released later this year, Lewis says. The capabilities will work on both ends of the tool chain, allowing users to query Teamcenter PLM from Slack or Teams without leaving the collaboration hub to find out the current status of parts, for example, or to have access to a conversation stream that might be relevant to an engineering change request managed by PLM.

“It will help users make faster decisions with up-to-date information,” Lewis says. “A lot of PLM vendors are trying to build their own collaboration capabilities, but from our perspective, that doesn’t make a lot of sense.”

That’s not the case for Dassault Systèmes, which has steadily been folding a number of internally built collaboration capabilities into its 3DEXPERIENCE platform to make product and design collaboration “frictionless” and free from information silos, says Rekha Kamat, 3DEXPERIENCE platform business development executive for the firm. Specifically, Dassault is buttressing the 3DEXPERIENCE platform with social collaboration apps that allow the full spectrum of users to communicate and share ideas in context, with the same access controls and authorizations supported by the enterprise security model—a practice that is not fully embraced by standalone collaboration hubs, she contends.

As part of the 3DEXPERIENCE Social Collaboration Services, Dassault Systèmes offers 3DSWYM, a tool for creating communities to share expertise through blogs and real-time conversations, along with 3DMessaging for instant collaboration and 3DDrive, a way to securely share documents and 3D files in the cloud that is design-aware, so it understands the relationship between linked files. 3DPlay allows design collaborators to experiment with 3D objects, including the ability to drag, rotate or lift models via browser-based visualization.

“This provides a way where communication is contextualized in the same enterprise environment, with the same security model and access controls,” Kamat says. “If you want to come back and find out who came up with an idea among a series of stakeholders, you can find it—there’s a complete digital thread.”

Moreover, users don’t have to go back and search for specific conversations—the Social Collaboration Services allow them to subscribe to areas or projects of interest so they will receive notifications; they can also tag posts, make comments, instant message and invoke video calls and voice chats much like they do with the social platforms used in their personal lives, Kamat says.

At Autodesk, the company is focused on providing its customers with collaboration options. Charlie Candy, global business strategy leader for Design & Manufacturing at Autodesk, says the company equips all of its subscribers with live collaboration tools that enable real-time, visual and interactive feedback to allow them to capture light discussion in context, rather than relying on emails and meetings.

“We want to be flexible to our customer’s preferences, so we’ve made it possible to integrate these platforms with Fusion Lifecycle, using open APIs and Autodesk Forge,” Candy says. “For example, a customer could use a Slack integration with Fusion Lifecycle to respond to triggers or updates to records. This provides an event ‘watch’ that can post messages to social media or Slack (or Trello or Asana) for instance.”

Arena Solutions is making it a priority to build its own social collaboration capabilities within its controlled PLM environment. The reason, says Scott Reedy, senior director of marketing, is if you push product development-related data or conversations into a tool like Slack, it requires people to be users of both systems to get the full depth and context for the data.

In contrast, Reedy says Arena Scribe, as part of the PLM foundation, offers one place to manage product development and quality processes collaboratively. Users can engage in discussions through a chat interface, and those interfaces are directly connected to the product record. In addition, there are controls to limit what discussions and comments suppliers may access.

“You need to be able to collaborate with internal teams and supply chain partners, but the key is how do you do it in a secure manner and not like email, which is disconnected,” Reedy says. “If the collaboration tool is not directly connected to PLM, it makes it hard for everyone to know if they’re working with the latest information.”

Aras, which has offered social collaboration capabilities for the Innovator PLM platform since 2014, has continued to round out these functions as part of its HTML5-based Visual Collaboration feature set. Visual Collaboration allows team members to mark up and share 3D models, office documents and schematics as part of a discussion thread that is visible to users in an Innovator side panel displayed in context with a document or BOM, explains Rob McAveney, Aras CTO. Moving forward, McAveney says the tool is being expanded with support for more live sessions, collaboration during authoring and presence indicators for live chat so team members can interact in real time. 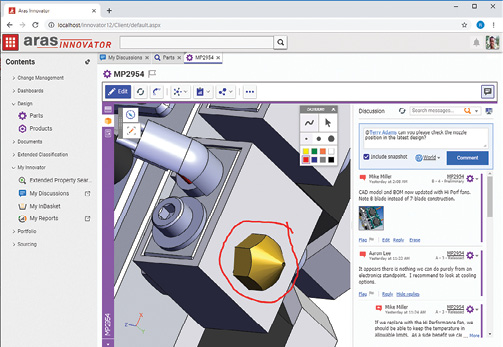 As part of Aras Innovator’s Visual Collaboration capabilities, MyDiscussions provides a feed of all activity relevant to the user, including the context in which it was written. Image courtesy of Aras.

“There is a need for informal collaboration—conversations not about what you had for lunch, but about the parameters of the thing you are designing,” says McAveney. “That’s why we believe it’s important to build social into PLM, not because it’s cool, but because the information is sensitive and you want to keep control over it.”