Companies should be open to the possibilities of working with other companies, and to extend their reach beyond the four walls of their enterprise.

For engineering firms that don’t want to be left behind in the age of digitization, collaboration will be critical. And not just internal collaboration across departments, but collaboration with customers, suppliers, vendors, and even companies in other industries.

That was the message delivered during the morning keynote session at the Conference on Advancing Analysis & Simulation in Engineering (CAASE18) this morning in Cleveland by Dr. Caralynn Nowinski Collens, CEO at UI Labs, an innovation accelerator based in Chicago. 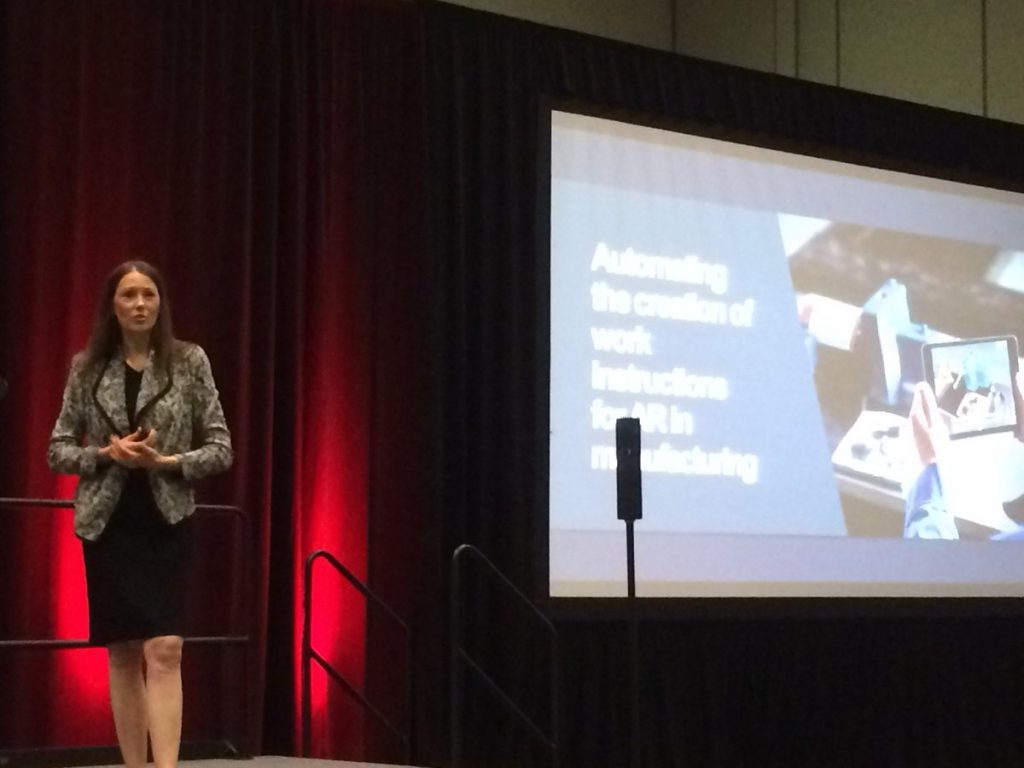 According to Nowinski Collens, innovation has traditionally been tied to the tools available to users. After a brief overview of enabling tools throughout history (from fire in the Stone Age to wireless communication in the Digital Age), she zeroed in on how data has become a critical tool. “Data is changing everything,” she said.

But that data is much more useful when it can be used collaboratively. “These types of cross-functional and cross-disciplinary collaborations are challenging, but can lead us to huge steps forward,” she said.

In the engineering space, some of the obstacles to collaboration include a lack of common file types, incompatible software solutions, and operational silos.

UI Labs helps break down those barriers by bringing disparate groups of stakeholders together to define and address problems. Those groups often include competitors, large companies in different industries that face similar challenges, software vendors, hardware vendors, and others.

By bringing these companies (large and small) together, UI Labs hopes to address what Nowinski Collens referred to as a disparity in digitization. “Digitization is happening in all industries, but it’s happening unevenly,” she said. “The difference between digital leaders and laggards is remarkable. To be able to maintain competitiveness, we need to be able to provide access to these digital tools to all parts of the supply chain and value chain.”

Doing so can accelerate profits, jobs, and wage growth. “There’s a lot at stake for those who don’t embrace digitization,” she said.

While the collaboration necessary is hard to achieve, “imagine if we can find ways to more collaboratively work together to understand what the problems are and how to solve them,” she said.

That usually involves companies in different industries working together. At UI Labs, Lockheed Martin, Caterpillar, and Procter & Gamble, for example, collaborated on a project for making better use of augmented reality (AR) in manufacturing. That project was then shared with smaller companies, universities and other stakeholders via UI Labs.

“When you can look at a common problem together and leverage each other’s resources and insights, you can find new ways of solving that problem,” she said.

Other examples include UI Labs’ work to create a virtual map of the underground infrastructure in the city of Chicago. That project, which has already had a successful pilot, involved collaboration among multiple city departments, universities, and technology vendors. “This kind of mapping would not be possible without these organizations coming together and combining their tools to achieve what none of them could have done on their own,” she said.

UI Labs also worked with Caterpillar and other companies to create a way to reduce machining errors by automating adjustments to account for variability using imaging. That project resulted in a 95% reduction in machine variation and a decrease in scrap material. The resulting solution can be commercialized and sold to Caterpillar’s suppliers and those of its competitors.

How UI Labs approaches the process of innovation. #CAASE18 pic.twitter.com/o42PxxMzEL

In the augmented reality project mentioned earlier, the companies involved developed a way to use video to capture process steps and then turn those into work instructions that could be shared via AR with new employees. The solution led to a 25% reduction in assembly time in one instance, and cut assembly errors down to nearly zero.

Nowinski Collens recommended that companies be open to the possibilities of working with other companies, and to extend their reach beyond the four walls of their enterprise. “Talk to customers and users of products, and those that ultimately have to translate these virtual ideas into the physical world,” she said.

Companies also have to be willing to take calculated risks when it comes to collaboration.

The results can be tremendous. “It brings the whole market forward, so the laggards can catch up to the leaders,” she said.