LK Metrology’s new 8.5 version of their CAMIO CMM software has a range of new features.

LK Metrology’s new 8.5 version of their CAMIO CMM software has a range of new features. 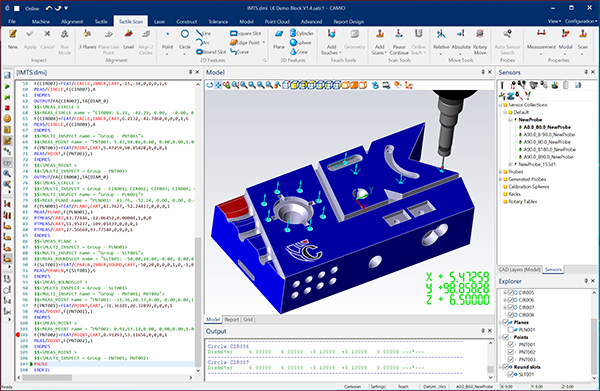 Full graphical interaction with the CAMIO software allows the program to be fully simulated prior to operation. Image courtesy of LK Metrology.

Coordinate Metrology Society Launches Level-Specific Certification Programs
CMM Operators can earn industry-recognized credentials for their mastery of metrology.
PolyWorks Software Joins the SMARTTECH3D Offer
It is a universal metrology software platform that is designed for processing and analyzing three-dimensional...
NIMS Partners with OMIC to Develop Metrology Standards and Certification
The skills and certification metrics will be defined by compiling and comparing available metrology reference...
Navajo Technical University Chooses Optomec System for Metal AM Training Center
NTU purchased the directed energy deposition machine with a National Science Foundation grant for use...
More Metrology

LK Metrology’s new 8.5 version of its CAMIO CMM software has a range of new features.

There are improvements in the setup of the Machine Launch Utility for offline programming. There are additional options for opening and/or printing CAMIO reports. Also check out the ability to relocate a single stall of rack instead of all the stalls.

“Common practice is to provide a couple of new releases of metrology software like CAMIO every year, but in 2018 LK Metrology acquired the Nikon CAMIO CMM software business and needed to rebrand it, refresh the interface and implement a new licensing mechanism,” Dennis Freimark, LK Metrology’s North American chief software applications engineer explains.

Several of the significant additions were: (1) The new ability to interface with Geomagic’s 3D-data processing software that is used in 3D scanning solutions to create accurate models from scanner data, or for quality control and measurement applications; (2) Support for the Renishaw PHS1 head system along with the ACR2 autochange rack. ACR2 is a modular extension arm change system for the PHS1 servo positioning head that allows any number of racks to be positioned on a pillar anywhere within the machine volume. (3) Support for the Renishaw SP80 head; (4) Changes to the docking behavior of the windows to allow users to more easily customize the interface for a specific task or application.

Freimark adds, “The shift from Nikon CAMIO to Lk Metrology CAMIO has been a smooth transition for our customers, and the new 8.5 version incorporates many of the needed enhancements that provides CMM users with greater measurement flexibility for better product conformance.”

LK is a long-time manufacturer of coordinate measuring machines (CMMs). The company was founded  in Derby England 1963 by Norman Key and his father-in-law Jim Lowther. In 2018, ASI Metrology in Torino, Italy, purchased all the CMM production, development, sales and services activities, including the CAMIO software from Nikon Metrology. A strategic partnership with Nikon Metrology continues as a Preferred CMM Sales Partner for LK CMMs. LK Metrology manufacturing continues to be located in Derby, England, with sales and support offices in the UK, North America, Belgium, France and Germany.