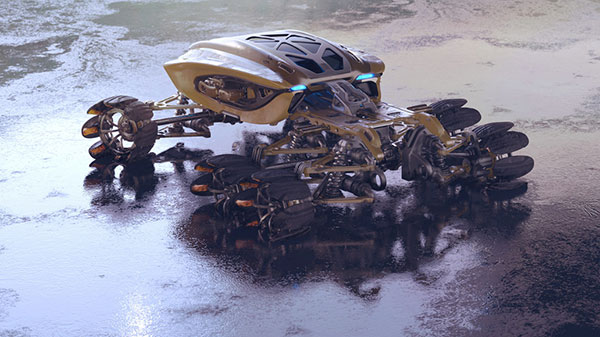 The types of 3D objects typically found in the film industry can be divided into two categories: Organic objects and hard-surface objects. Organic objects range from the primeval ape in “Kong: Skull Island” to the nightmarish creatures in the “Alien” franchise inspired by H.R. Giger’s artwork. Hard-surface objects are the iconic X-wing fighters from the “Star Wars” series, Tony Stark’s high-tech body suit in “Ironman,” and Optimus Prime and his Autobot comrades in the “Transformers” films.

For sculpting the muscle structures of King Kong and his thick coat of hair, polygon-based modelers like Autodesk 3ds Max, Maya or ZBrush are a better choice. On the other hand, for constructing spacecraft with well-defined solid geometry and surfaces, and for recreating iconic vehicles and buildings in their true dimensions, CAD is a better choice. After all, CAD is the engineers’ preferred program for making manufacturable objects. (Note that CAD may also be used by some as an all-encompassing term to refer to 3D modeling software of any kind in general.) 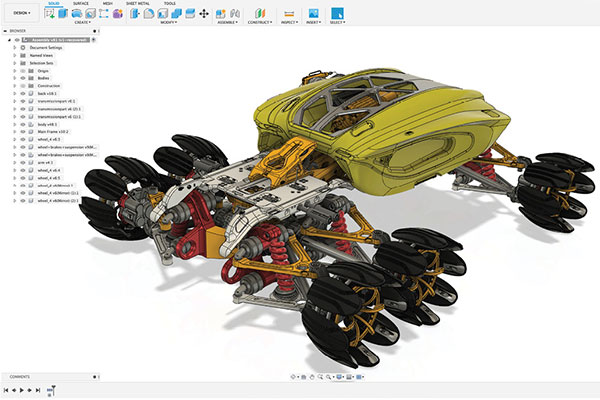 As the degree of realism in movies has increased, so has the use of digital wizardry in the industry. With the introduction of 3D printing, the use of CAD to design and make instantly printable movie props is also becoming more common. In this article, we look at the collision of parametric modeling and polygon pushing to understand how each complements the other to create the make-believe world of movies.

In movie industry lingo, Kirill Chepizhko is a hard-surface modeler. With credits in “Star Wars: Rogue One,” “Transformers: The Last Knight” and “Kong: Skull Island,” Chepizhko uses his industrial design skills to add a sense of realism to the objects he creates. When he needs to emulate an object in reality, whether a piece of a weapon, a vehicle or a building, his software choice is Autodesk Fusion 360. 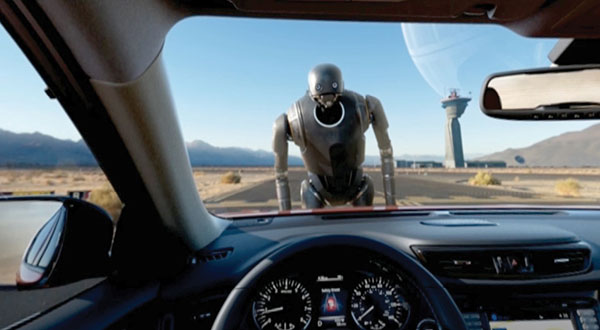 Still image from a car commercial with ties to “Star Wars: Rogue One.” Image courtesy of Kirill Chepizhko.

“I would use Fusion 360 to do those in the real world, so to do it in the virtual world, it makes sense to take the same approach. That way, the finished look will be very close, if not identical, to what is manufactured,” he reasons.

Bryce Heventhal, senior manager, Technical Marketing, Design & Manufacturing at Autodesk, says, “I could model a truck’s solid geometry in Autodesk Fusion 360 within minutes, but to do the same work in triangle-based [polygon-based] programs would take much longer.

“There hasn’t been a good workflow developed for CAD to polygon modelers,” Heventhal adds. “A lot of it is still done via a triangle-based format like OBJ.”

For props that need to be 3D printed, the standard approach is to export the file as STL, he notes. But in the future, Heventhal sees the emerging 3MF format overtaking STL.

Many see 3MF as a better alternative to STL. The standard is championed by the 3MF Consortium, supported by members such as Autodesk, Dassault Systèmes, HP and PTC. In addition to geometry, the format can also convey color information and distinguish support structures (to be removed after printing).

“In that case, Nissan provided the CAD files, but we couldn’t use them straight away, because the CAD models are not easily adjustable into the filmmaking pipeline. Our first job was to take that CAD car model apart and strip off the unnecessary details, and then rebuild it in polygons,” Chepizhko says.

CAD models are usually complete with holes, bolts, fasteners and internal components invisible from the outside. Such details are an unnecessary burden for filmmakers, who are mainly concerned with the outer shape of the vehicle visible to the camera. In most cases, such a model needs to be converted into mesh- or polygon-based format for easier editing and manipulation in film-friendly modeling programs.

Nevertheless, having access to the CAD files as a reference is a huge help since it eliminates the need to build the vehicle from scratch, “but that is probably one of the rare cases. I don’t think that happens a lot,” Chepizhko notes. For automotive manufacturers like Nissan, CAD files with manufacturing details are protected intellectual property; therefore, sharing them with outsiders is not the norm.

Some software offers automated conversion from parametric to polygon model, but, for Chepizhko and his colleague, it was a manual process.

“We ingest the CAD file into Maya, then use polygonal tools to retopologize the car,” Chepizhko recalls. “It was labor-intensive. We have to make visual decisions based on what you would see on screen and what you won’t.”

In the Nissan commercial, certain parts of the vehicle needed to be animated in a way that’s consistent with how the actual vehicle operates. Some details may be hidden in one camera angle, but visible in another. Chepizhko and his colleagues used their movie-making experience to decide which details to keep so the movements look realistic.

At SOLIDWORKS World 2018, the Dark Knight’s vehicle, the Batmobile, made a cameo appearance on stage alongside Joe Hiura and Robert Andrew Johnson, art directors and set designers with credits in “Oblivion,” “Passengers,” “Tron: Legacy” and “Batman v Superman.” Hiura and Johnson use the industry-standard CAD package SOLIDWORKS to build some of the iconic props. The Batmobile is just one of them.

The Batmobile as part of the SOLIDWORKS 2018 presentation, by SOLIDWORKS users Joe Hiura and Robert Andrew Johnson. Image courtesy of Warner Brothers.

“There’s a massive trend, I’d say in the past 10 years, in the blockbuster movies to rely on CAD to build their sets and vehicles. Whatever cool concepts you build in a polygon modeler have to be rebuilt inside a CAD tool in order to physically prototype those parts and get them ready to be shot on camera. On the other hand, using something like SOLIDWORKS allows you to go directly from CAD to CNC machines,” says Brian Hillner, senior product portfolio manager, Dassault Systèmes SOLIDWORKS.

The improvements in 3D scanning have also made it much easier to bring real-world objects, such as iconic vehicles or recognizable monuments, into films and games as digital models. In certain scenes in the “John Wick” films, New York’s Times Square and the interior of the fictional Continental Hotel seemed to have sustained massive damages, a result of a barrage of gunfire. But most of these were digital damage inflicted on digital models. The dimensionally accurate sets were created using scan data acquired using LiDAR scanners from Leica Geosystems, part of Hexagon.

“The building for the shoot-up of the Continental was One Hanson Place in Brooklyn, [NY,] which is huge. It was just a pure race against time [to scan it],” reveals John Ashby, LiDAR supervisor at Aura FX, a set-data acquisition service provider (“Blockbuster Scanning: Using LiDAR for Joker & John Wick,” case study here).

In the future, CAD software developers could make it much easier to import 3D scan data for further editing and manipulation.

“Artificial intelligence and machine learning could be used to really speed up the repetitive process of cleaning up the scanned data, from something that’s very, very dense to something that’s more lightweight,” notes Hillner.

Competition From the Outside

Surfaces converted from CAD models are highly tessellated, as Chepizhko discovered. “So no matter what, we still have to retopologize them to be able to apply UV maps and textures,” he adds.

Autodesk Fusion users can use the KeyShot plug-in for Fusion users. The advantage of using this approach is that, as Chepizhko notes, KeyShot recognizes and retains the assembly hierarchy in the CAD model. “In animation projects in KeyShot, I would organize my Fusion files by subfolders in the same way the assembly actually works,” he explains.

“I think Fusion is a sweet spot for many of them,” Heventhal says. “They’re actually pushing what Fusion can do, because they are combining many different types of CAD techniques, whether it’s T-splines, direct editing, parametric editing or mesh editing. They might still do the final 20% to add a few more touches in the triangle-based modelers,” he notes.

“The trend has really started to shift with people like Joe and Robert in the film industry as the tool’s [spokespeople]. They showed it to their colleagues and said, ‘Hey, if you start the project in SOLIDWORKS, you can get to your finished part much faster,’” says Hillner.

Though engineering-centric 3D modelers are more skilled at judging a design’s manufacturing issues, modelers from film and game industries are better trained to create aesthetic appeal, from scene composition to dramatic lighting.

“CAD engineers probably don’t realize that people in the entertainment industry and concept artists using CAD are basically a competition to them,” Chepizhko observes.