At the Intersection of CAD and CAE 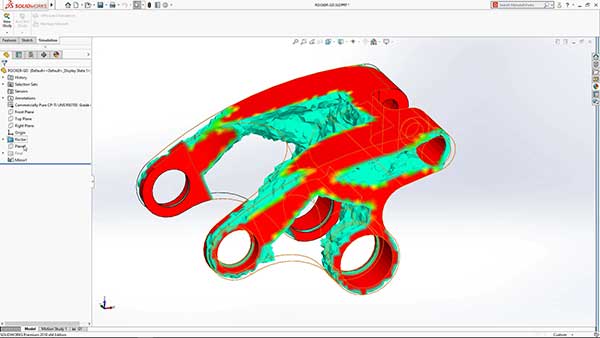 From the outset, CAD and simulation appear to be converging, leading engineers to identify and eliminate impractical concepts much earlier in the design process.

For the trend to become widespread, Walsh believes a key barrier needs to be removed.

“First, the tools need to be easy enough for the designers to use without becoming a simulation expert,” Walsh says.

This calls for a delicate balance. The designer-targeted simulation tools must employ terminologies familiar to the design, not a simulation expert. But it must also be extensive enough to tackle a range of linear, nonlinear, fluid flow and thermal flow to be useful.

Many standard CAD packages offer some basic simulation tools at no extra cost. This is especially true of vendors that have both CAD and simulation products in their portfolio, such as Autodesk, Dassault Systèmes, Siemens and PTC. Vendors expect the familiarity with simulation inside CAD may increase adoption of higher-end simulation programs. It was a trend that began more than 10 years ago. 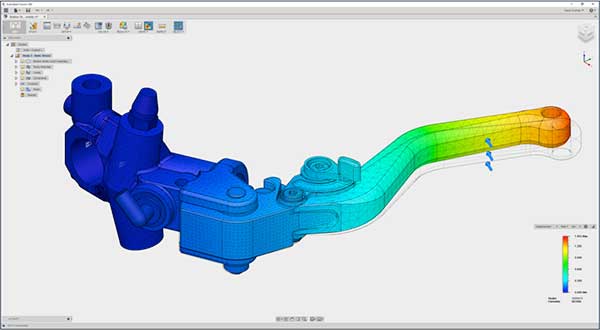 The mistake made by some vendors in the early days “was to water down the simulation tools given to the CAD users, because they were worried it might affect sales of their high-end simulation tools,” recalls Keith Meintjes, fellow and executive consultant for simulation, CIMdata.

Although simplifying simulation tools to make them accessible for designers is the right approach, “reducing the physics in it” to create a watered-down version is not appropriate, Meintjes warns. Some early attempts to integrate simulation in CAD resulted in tools limited to linear physics, only good for single-component analysis. Such tools may be too limited to be effective enough.

The barrier to entry to CAE can be lowered by programming and automating decisions that the designers are unequipped to make, such as mesh type or coarseness, Walsh points out. It could be further lowered by careful assessment of the terminology used in the simulation interface, he adds.

“Most of the designers design geometry; they do not design the function of a product,” he points out. “For them, loading and boundary conditions are unfamiliar terms.”

This issue, however, may not be solved just by revamping the user interface. It may involve training designers to describe products functions and physics in software-calculable values.

“We’re making progress in that front, but we’re not there yet,” Walsh says.

“You might find that, in some companies, many CAD operators have a two-year associate degree, but they may not be engineers,” warns Meintjes. “So they might not understand what load cases are, might not know what a von Mises stress is.”

Standard simulation tools usually display analysis results, such as von Mises stress, in color-coded regions. To the untrained eye, they may be impossible to interpret, making them utterly meaningless.

One effective method is purpose-built simulation (for example, a CFD simulator for valves or a fan blade stress analysis program), which reduces the choices down to a few geometry parameters.

These app-style simulations are a phenomenon of the cloud-powered on-demand commerce. Examples can be found in online simulation portals, such as Simulation Hub, which offers various simulation apps to subscribers.

Multiphysics simulation software maker COMSOL is among those betting on this trend. Accordingly, it provides the App Builder function, which allows experts to create purpose-built simulation apps and publish them for wider use.

Though easy to learn and master, these apps are also highly restricted in usage. Unlike general-purpose simulation software, the user cannot repurpose a CFD simulator for valves to run airflow analysis on a race car, for example. It can only be used to test and verify a single scenario with a broad range of variables.

The success stories Meintjes have seen are where “the company made the CAE expert responsible for the success of the CAD designer,” he recalls. “In these cases, the CAE experts are often the ones that provide the load case values, and they usually review what the designers did.”

This formula, he notes, usually leads to first-time design concepts that are highly likely to succeed. There are encouraging signs that the CAD-CAE bond is getting stronger.

“The designers are getting mentoring from CAE experts more, and the tools are getting easier to use,” Meintjes says.

“Some people design wheels, some design axles and some design brakes, for example. Over time, they learn to apply different load cases to the same scenario and develop the knowledge to design ways to deflect stresses,” Meintjes adds.

“Simulation tools are best used early in the process,” Meintjes notes. “That’s when you have the freedom to explore various design options.”

The first-level simulation conducted by the design engineer doesn’t eliminate the need for input from a simulation expert, Walsh warns. The first-stage simulation is only to ensure that the ones sent to the expert for verification are “more likely to succeed than fail.”

Analytics: The Next Piece of the Digitalization Puzzle
Data collection is not enough; companies must have the right framework and tools in place to gain insights and improve operations.
ITC Infotech and PTC Expand Alliance via Acquisition
ITC has purchased much of PTC's PLM business.
PTC Gears Up to Help CUPRA Build Electric Racecar
The CUPRA Racing Team, who also use PTC’s PLM Windchill solution as its main information management system, has used Creo software.
PTC and Partner PDSVISION Collaborate with Electrolux
Collaboration will focus on digital transformation.
Editor’s Picks: May 5-11, 2022
One of the picks will be chosen as DE’s Editor’s Pick of the Week.
PTC Company Profile