This affordable CAD program looks a lot like AutoCAD, but brings functionality at an affordable price.

This affordable CAD program looks a lot like AutoCAD, but brings functionality at an affordable price. 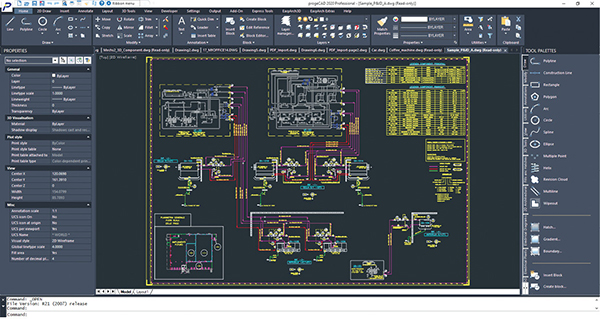 In the world of AutoCAD workalikes, progeCAD may not be as well known. Developed by the Swiss company progeSOFT, a founding member of the IntelliCAD Technology Consortium (ITC), progeCAD is based on the Theiga library from the Open Design Alliance (ODA). It uses DWG as its native file format.

The latest version, progeCAD Professional 2020, reads and writes files compatible with the most recent (2018) AutoCAD file format and can also work with DWG files going back to AutoCAD Release 2.5. With the new release, progeCAD can also import Autodesk Revit RFA and RVT files as well as IFC files. It even supports point clouds saved in Autodesk’s Recap formats (RCP and RCS) as well as the PCG, ISD, XYZ, PLY and LAS formats.

progeCAD also stands out for its ease of use. Unlike some other AutoCAD clones that intentionally look different than AutoCAD, progeCAD should appear familiar to anyone who has ever used AutoCAD. But its compatibility only goes so far.

When you first start progeCAD, you can choose between a classic interface with pull-down menus and multiple toolbars, or a ribbon interface that looks nearly identical to that of AutoCAD. You can then easily switch between them at any time by simply changing workspaces.

With the Ribbon Menu workspace active, the user interface (UI) is nearly indistinguishable from that of AutoCAD, with an Application Menu button in the upper-left, a Quick Access Toolbar across the top of the screen, and a ribbon with tools that look almost exactly like those in AutoCAD.

A default Properties palette is docked on the left side of the screen and a Tool palette on the right. These and other progeCAD palettes look and feel just like those in AutoCAD. There is also a command window that is initially docked across the bottom of the screen, and it too behaves identical to AutoCAD. Even the status bar, which extends across the bottom of the program window, looks strikingly similar to AutoCAD, right down to the appearance of the various icons. And like AutoCAD, you can change the items that display on the status bar.

Of course, progeCAD is not AutoCAD, which means that once you start looking around, you will find lots of differences. For example, when a command is active in AutoCAD, options appear on the command line and you can select the desired option by typing, by clicking the option in the command window, by pressing the down-arrow and choosing from a menu, or by right-clicking and then selecting from a shortcut menu. 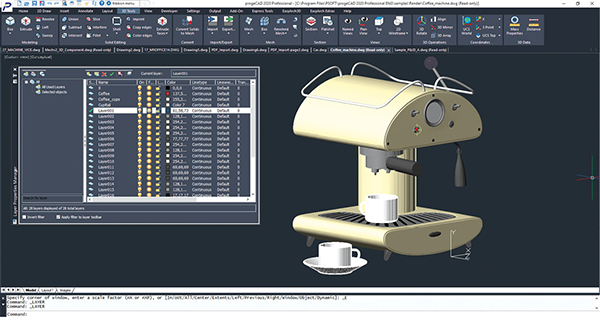 progeCAD offers many of the 2D and 3D tools found in AutoCAD but lacks other capabilities that AutoCAD has had for many years.

In progeCAD, you can also use any of these methods except for right-click. Although you can right-click at other times to display a shortcut menu—right-clicking when no command is active displays a menu of frequently used commands and shift+right-click displays an object snap menu just like AutoCAD—right-clicking in progeCAD while a command is already active does not bring up a list of command options. It often does nothing.

More glaring, however, is progeCAD’s lack of support for dynamic blocks. The latest version of progeCAD finally introduces a dedicated Block Editor authoring environment for creating and modifying block geometry. But there is currently no provision for creating dynamic blocks, something that AutoCAD added in the 2006 release, nearly 15 years ago.

If you open a DWG file containing dynamic blocks created in AutoCAD, you cannot edit those blocks in progeCAD’s Block Editor and the only dynamic functionality accessible in progeCAD is the ability to change the visibility state—assuming that capability was included when the block was created in AutoCAD. The only saving grace is that progeCAD will not even allow you to open a dynamic block for modification.

And that’s just the tip of the iceberg. Lots of other AutoCAD features and functions are missing from progeCAD. For example, the program lacks any rendering capabilities until you download and install the free Artisan for progeCAD renderer. Once installed, you can render images, but the process is very different from that of AutoCAD.

The list of AutoCAD functions missing from progeCAD is quite extensive. progeCAD lacks roll-over tooltips, intelligent dimensioning, DWG compare and geometric center object snap. You cannot modify the UCS by right-clicking the UCS icon. There is no ViewCube for orienting 3D models. And while progeCAD has no trouble displaying two-dimensional drawings of 3D models created in AutoCAD using the drawing views tools, there are no similar tools in progeCAD for creating a base view and projected views. Also you cannot modify drawing views that had previously been created using AutoCAD.

In addition, due to a lack of context-sensitive ribbons, functions like adding a hatch pattern, creating text and placing dimensions feel like you’re using a much earlier version of AutoCAD. For example, progeCAD uses a dialog box when creating or editing hatches.

A number of new features have been added to progeCAD 2020, including tool palettes for blocks, hatches and frequently used commands; the ability to digitally sign a drawing; infinite construction lines; the functionality to include formulas in tables; a balloon notification when an external reference is modified; system variable monitoring; path-based arrays; and an Add Selected tool that lets you create a new object of the same type and with the same properties as a selected object. Although new to progeCAD, these functions have been available in AutoCAD for many years.

The program can also import and export STEP and IGES files and convert PDF files into editable DWG geometry. Unlike AutoCAD, however, progeCAD’s PDF to DWG capability is accomplished using an add-on that converts a PDF file into a new DWG file, rather than importing the PDF into the current drawing. And like other AutoCAD clones we have recently reviewed, progeCAD does not recognize text in a PDF file originally created with SHX fonts.

What’s more, when importing a multi-sheet PDF file, progeCAD only converts the first page. In addition, while progeCAD can attach a PDF as an underlay, it cannot convert an attached PDF into drawing geometry. PDF underlays exist only as an image within the drawing. You cannot turn PDF layers on and off nor can you snap to geometry in the PDF underlay. To its credit, however, progeCAD 2020 can export 3D PDF files. 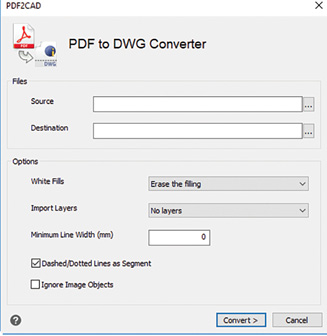 The latest version of progeCAD includes a separate program that converts PDF files into DWG.

The program also comes with a number of add-ons, including a Raster to Vector program that can convert images or scanned drawings into DXF files that can then be brought into progeCAD. There is also a block library with more than 20,000 2D and 3D ready-to-use blocks for architecture, mechanical design and electrical. There is also an interesting perspective image correction tool, but again, this is an add-on program that runs separate from progeCAD.

With all of these differences and numerous gaps in functionality, progeCAD’s main appeal is its price. Educational licenses are free and a single copy for commercial use costs just $499 for a perpetual license. Annual maintenance and support costs just $220 per year.

You can download a 30-day free trial from the progeSOFT website, complete with sample files and .chm-based help. There are also a number of video-based tutorials available on the progeSOFT website as well as a 696-page manual and a 233-page tutorial for new users and those who already know AutoCAD. Unfortunately, the manual is based on the 2011 release of progeCAD while the tutorial is based on progeCAD 2017.

There’s a lot to like about progeCAD, which is then somewhat tempered by frustration over incompatibilities and missing features. If you are looking for an affordable alternative to AutoCAD or AutoCAD LT, progeCAD is worth considering. Just be aware of the differences.