PTC to Offer ThingWorx to FIRST Robotic Teams for Free

The company announced it will be donating PTC ThingWorx software to all FIRST teams in addition to PTC Creo, PTC Mathcad, and PTC Windchill software.

At the FIRST Robotic Competition kickoff 2015, broadcasted by sponsor NBCUniversal, PTC announced its plan to give away the IoT product ThingWorx to student teams in the competition.

At the FIRST Robotic Competition kickoff 2015, broadcasted by sponsor NBCUniversal, PTC announced its plan to give away the IoT product ThingWorx to student teams in the competition.

Before someone came up with the term Internet of Things and turned it into an acronym (IoT), student teams in the FIRST robotic competition were tinkering with chips and sensors, building semi-autonomous electro-mehanical systems running on lines of code. Their efforts, one can argue, were precursors to the autonomous cars, self-monitoring thermostats, and drones that people now think of as IoT marvels.

PTC has long been a supporter of the mechanical modeling portion of the robotic teams’ workflow. But when PTC acquired the IoT platform supplier ThingWorx, the company gained something else it could offer to FIRST contestants. This week, PTC officially began offering it.

The company announced it will be donating PTC ThingWorx software to all FIRST teams in addition to PTC Creo, PTC Mathcad, and PTC Windchill software. PTC ThingWorx can be used to create an application which displays data collected by sensors on the robot in order to tell teams how it is performing, and what type of adjustments may be needed.” PTC describes ThingWorx as a platform to develop machine-to-machine (M2M) and IoT applications.

The announcement was made at the FIRST Robotics Competition (FRC) Kickoff on January 3, cosponsored by PTC, NASA, and Comcast NBCUniversal. 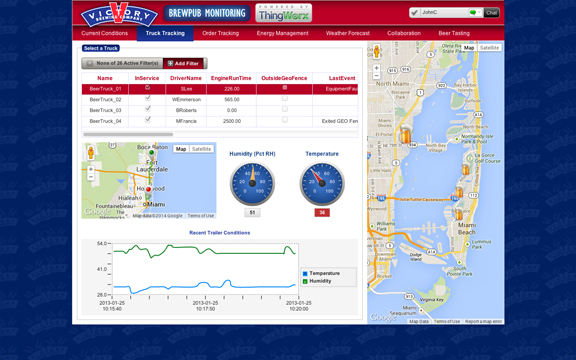 A app powered by ThingWorx to monitor beer brewing.

Most FIRST teams use LabVIEW from National Instruments (NI) as the platform to program their robots’ autonomous functions (such as path finding and obstacle avoidance in the field). Open-source Arduino has also found favor among FIRST teams as a tool to teach robots to sense and detect their physical environments. The demands of the competition—such as asking the robot to shoot a ball through a hoop or balance itself on a seesaw pole—inherently encourage design teams to implement IoT functions.

Historically, IoT—adding connectivity, real-time data processing and synching, and sensor-driven functions to products—is not CAD and PLM companies’ forte. When the importance of IoT became apparent, some, like PTC, began expanding into the area through acquisitions. Its acquisitions of MKS (May 2011) Axeda (August 2014) reinforce its strategy to aggressively pursue the IoT market. Rival Autodesk’s purchase of Circuits.io (Jan 2014), though less publicized, also reflects the same IoT concerns.