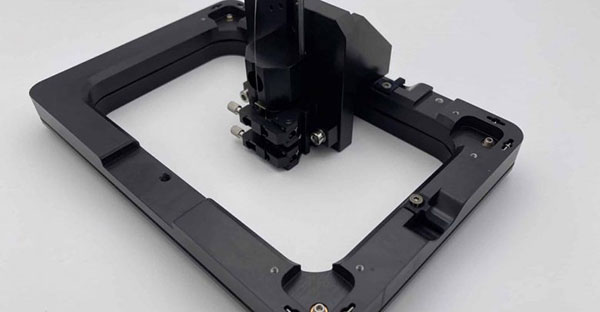 The newly developed Tilt Frame helps to maximize the precision of the print result especially of large-scale structures. Image courtesy of UpNano.

A new device allows the compensation of minuscule unevenness in two-photon polymerization (2PP) 3D printing substrates while printing. UpNano GmbH (Austria) has introduced the so-called Tilt Frame, internationally. The frame can be fitted with chuck-holders for industrial standard wafers between 2 and 6 inches.

The Tilt Frame retrofits any of UpNano’s NanoOne series of laser-powered 2PP 3D printing systems that can build structures across 12 orders of magnitude at fast speeds.

The NanoOne series can print structures at a nanometer resolution, as well as in the centimeter dimension. It has already been used in electronics, as well as in micro-optics, and for biocompatible applications in cell and medical research. The larger the printed structure, the more the slightest unevenness of the print material will affect the precision of the final product.

The newly developed Tilt Frame helps to maximize the precision of the print result especially of large-scale structures.

UpNano has addressed this complication with the introduction of its Tilt Frame. The R&D department of the company developed a tiltable frame that can correct an unevenness in the µm range. The Tilt Frame can be extended with various holders including a series of chuck-holders for up to 6-inch wafers. The entire surface of wafers, up to 4 inch, is now accessible for 2PP 3D printing.

“By equipping any NanoOne printer with the Tilt Frame,” explains Denise Hirner, head of Marketing and Business Development, and co-founder of UpNano, “one maximizes the precision of the print result, especially of large-scale structures.”