New MakerBot report finds 3D printing will play a bigger role in the supply chain and in localized manufacturing over the next few years.

New MakerBot report finds 3D printing will play a bigger role in the supply chain and in localized manufacturing over the next few years. 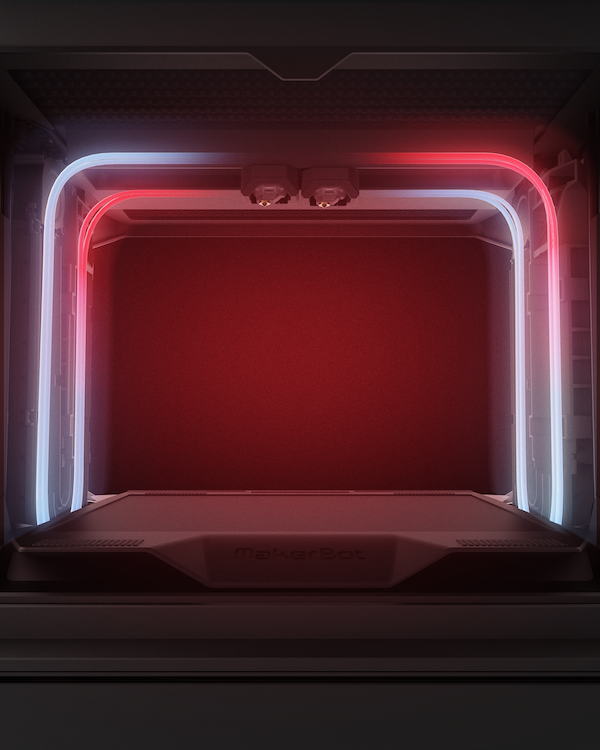 The MakerBot Method has a fully heated build enclosure. Image Courtesy of MakerBot.

As with many technology initiatives, investment in 3D printing has not taken a hit this year despite all the business challenges related to the COVID-19 pandemic.

That’s according to a new 3D Printing Trend Report published by MakerBot. Fueled by new materials (61%) and reduced costs (58%), respondents expect 3D printing use to grow over the next three to five years, in part to play a bigger role in the supply chain (49%) and to support localized manufacturing (46%). Nearly three quarters of respondents (74%) said they expect to invest in 3D printing over the next year while a little over half (56%) did not expect interruptions or fall out from the global pandemic to impact their 3D printing investment plans. Fifteen percent of respondents said they actually plan to increase spending on 3D printing.

“2020's challenges put much of what we had taken for granted into perspective—it forced us to be creative in how we can work effectively while remote and with little resources,” notes Dave Veisz, MakerBot’s vice president of engineering. “When supply chains broke down due to the pandemic, 3D printing stepped in and proved itself as a viable alternative to traditional manufacturing for critical components. This put the technology in the spotlight and highlighted its value as an alternative to traditional manufacturing.”

Companies struggling to roll out 3D printing on a wider scale pointed to lack of budget (53%), lack of training or expertise (29%), and little perceived value or need (29%) as the greatest impediments.

The ability to customize parts and designs is the No. 1 reason respondents are moving to 3D printing—a trend cited by 68% of survey respondents, who are taping the technology to create bespoke production parts in low-to-mid volumes or to print complex geometries, cited by 57%. Within organizations, 37% of those using 3D printers hail from engineering or development with 20% coming from the design ranks. The biggest perceived upsides to the technology is cost savings, cited by 39% of respondents, support for on-demand production (34%), and the ability to print complex geometries (30%).

In fact, 73% of respondents reported saving up to three quarter of their time using 3D printing compared to alternative methods; nearly 71% said they saw similar reductions for cost when using 3D printing compared to the last production or prototyping method used. Those firms where 3D printing is well entrenched said they are enjoying numerous business benefits, including increased efficiencies (52%), reduced dependencies on external suppliers (41%), and the ability to establish new lines of business (40%).

As far as primary use cases, 3D printing continues to play a much bigger role in the research and design phases, with 70% using the technology for concept modeling, 66% for functional prototypes, and 44% for other R&D applications. 3D printing is also a complementary technology, with almost half of respondents (48%) using it along with CNC machining methods, 30% with milling, 21% with casting, and 19% with injection molding use cases.

3D Printing has also become a staple of engineering workflow, the MakerBot survey found. Almost a third of respondents (31%) said they were 3D printing parts or prototypes on a daily basis with over three quarters (77%) having access to their choice of printers—up to as many as five. Only 21% of survey respondents said they never use 3D printing. As for type of product and materials, the MakerBot survey found 93% of respondents reliant on plastics material for the most part followed by resins (25%), composites (14%), metals (7%), and biomaterials (7%).

While the report shows that 3D printing is still heavily used for prototyping and modeling, companies are looking for materials that offer high strength and high temperature resistance for end-use applications such as jigs, fixtures, and robotic end effectors, Veisz says. Recent material launches like polycarbonate materials, available through MakerBot LABS, and nylon 12 carbon fiber have been a welcome addition to MakerBot’s METHOD platform for these demanding applications that go beyond prototyping use cases, he adds.

Moving forward, MakerBot expects to see more customization and new industry-specific applications as material development accelerates for various 3D printing processes, from FDM (polymer based) to DLP (resin-based) to SLS (powder-based). Many of these materials are certified for special applications like rail standards, aerospace, food safe, and flame retardance. This is enabling printing spare parts for industries that require such requirements.

“The addition of composites like strands of carbon fiber into polymers drastically improves stiffness and strength which make more plastic-based 3D printable materials suitable to replace parts that would otherwise require a machined metal part,” Veisz says. “MakerBot makes jigs and fixtures for our own manufacturing line on our machines, and people are amazed when they see how well they hold up over the lifetime of a production line.”

Watch this video to learn about the MakerBot Method’s open material approach.