This new 15-in. mobile workstation is a price and performance leader.

This new 15-in. mobile workstation is a price and performance leader. 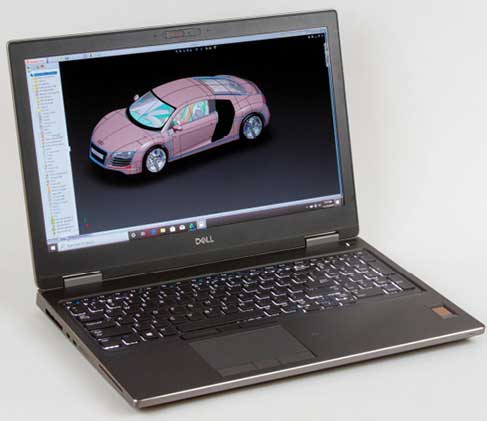 The new Dell Precision 7540 15.6-in. mobile workstation is a great choice for serious design, engineering and virtual reality on the go. Image courtesy of David Cohn.

Dynabook Rolls Out New Satellite Pro Laptop Series
The company also announced a strategic relationship with SYNNEX Corporation, provider of distribution, systems design...
Remote Work is Here to Stay
Companies eye virtual workstation capabilities to support remote teams with real-time performance for graphics-intensive engineering...
A Year Like No Other
Though the uncertainty that arrived with COVID-19 early in 2020 does not appear to be dissipating;...
Superlaptop Falls Short: Breaking Down Eurocom Nightsky ARX15 Mobile Workstation
The company’s new Nightsky is fast, loud and expensive.
More Workstations 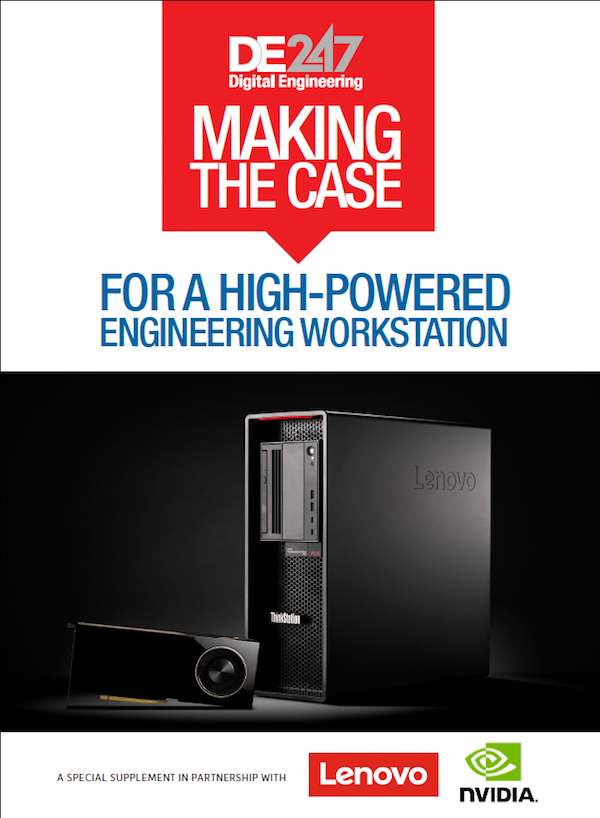 Making the Case for a High-Powered Engineering Workstation
The new Lenovo ThinkStation P620, combined with the powerful NVIDIA RTX A6000 GPU, can take...

We were quite impressed with the pair of Dell entry-level mobile workstations we reviewed earlier this year (see DE, September 2019). When the company sent us one of its premium 7000-series systems, we were happy to put it through its paces.

The new Dell Precision 7540 is a 15-in. mobile workstation featuring a 9th-generation Intel processor. Depending on the configuration, the 7540 can house three hard drives and up to 128GB of memory. With a starting price of just $1,269, the base configuration includes a 2.5GHz Intel Core i5-9400H four-core CPU, integrated Intel ultra-high definition (UHD) graphics, 8GB of RAM, a 2.5-in. 500GB 7200rpm SATA hard drive and a 1920x1080 display, but that’s just the starting point. 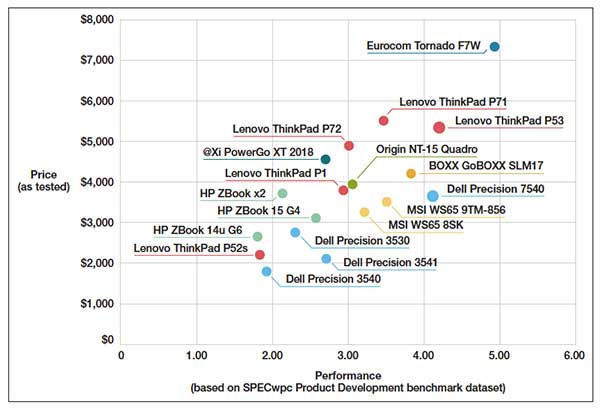 Graphic performance of recent mobile workstations, based on the SPECviewperf 13 geomean results.

Lifting the lid reveals a 15.6-in. display with a webcam centered in the top edge of the bezel, flanked by a pair of microphones and a camera status light. The webcam and microphone are optional—their inclusion depends on the specific display configuration—but even the base model comes with a camera and microphone. Our evaluation unit also included an infrared camera and a privacy shutter.

The larger size of the Precision 7540 compared with the 3000-series means that there is much room for expansion. The right side provides a headphone jack, two USB 3.1 Gen 1 ports (one power-enabled) and a security lock slot. The left side hosts two Thunderbolt 3 USB Type-C ports, an SD card reader and an optional SmartCard reader.

There are also ports on the rear of the 7540, including an RJ-45 network jack, a mini DisplayPort, an HDMI port and a round power adapter port. The bottom only includes a fan vent and a pair of speakers for the built-in MaxAudio Pro by Waves sound system. A Qualcomm dual-band wireless adapter with Bluetooth 4.2 comes standard on the base configuration, but the system we received substituted a more powerful Intel Wi-Fi 6 AX2000 dual-band adapter with Bluetooth 5.0.

The extra thickness of the 7000-series means that you can pack more components inside the chassis. CPU options range from the 2.5GHz quad-core processor in the base unit to the 2.4GHz Intel Core i9-9980H 8-core Coffee Lake CPU included in our evaluation unit. This processor contains a 16MB cache, a 5GHz maximum turbo speed and integrated Intel UHD graphics 630.

Our evaluation Precision 7540 came with an NVIDIA Quadro RTX 3000 graphics board with 6GB of GDDR6 memory. This virtual reality (VR)-ready GPU provides 1920 compute unified device architecture (CUDA) cores, 30 RT cores and 240 Tensor cores, backed by a 192-bit interface, enabling it to deliver a bandwidth of 336GB/second while consuming a maximum 80 watts.

The Precision 7540 can support up to 128GB of RAM, and 666MHz and 3200MHz memory modules are available. Our evaluation unit came with 32GB of 2666MHz memory, installed using four 8GB modules ($419). Systems based on Xeon processors can also be equipped with 2666MHz error-correcting code (ECC) memory.

Storage options are also abundant, and the 7540 can support up to three M.2 PCIe solid-state drives (SSDs) or two M.2 drives and one 2.5-in. SATA drive. Solid-state options range from 256GB to 2TB, whereas Dell offers 2.5-in. drives ranging from 500GB to 2TB, so you could configure a system with 6GB of onboard storage. The mobile workstation we received came with a 512GB M.2 NVMe PCIe Class 50 Hynix drive, which added $419. Systems equipped with two M.2 drives can also be configured as a redundant array of independent disks.

Although a four-cell 64 watt-hour (WHr) battery comes standard, the inclusion of the UHD display panel and RTX graphics in our evaluation unit meant that we also received a six-cell 97WHr Lithium-ion battery with ExpressCharge. That battery kept our Precision 7540 running for 7 hours and 51 minutes. A long-lifecycle Lithium Polymer version of this battery with a three-year warranty is also available.

Price/performance chart of recent mobile workstations, based on the SPECwpc Product Development benchmark.

The Dell Precision 7540 mobile workstation remained cool and nearly silent throughout our testing, with fan noise barely audible even under heavy compute loads. As expected, on the SPECviewperf test, which evaluates pure graphics performance, the Precision 7540 scored at—or near—the top on every dataset, losing only to systems equipped with the even more powerful NVIDIA Quadro RTX 5000 GPU. Scores for the SPECapc SolidWorks benchmark were equally impressive.

This Dell system also delivered excellent results on the very demanding SPEC workstation performance benchmarks. Although its CPU and graphics scores placed it near the top among systems we have tested recently, its storage subsystem score was the lowest we have recorded since we began using the latest version of this benchmark. The Dell Precision 7540 also completed our AutoCAD rendering test in less than 35 seconds, the best result we have recently recorded for any mobile workstation. 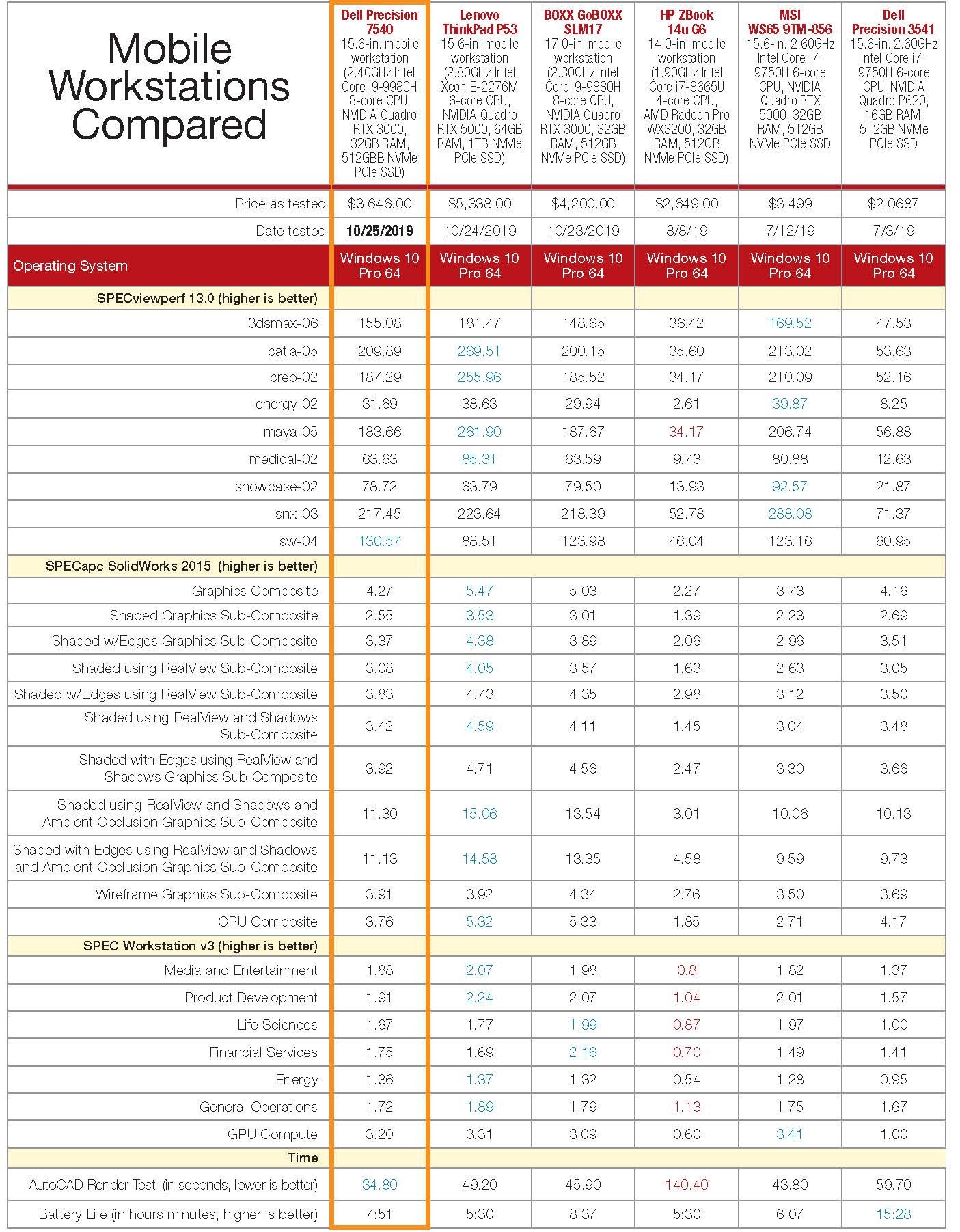 Windows 10 Pro came preloaded. Systems based on a Xeon CPU include Windows 10 Pro for Workstations, which adds $154 to the price. Ubuntu Linux and Windows 10 Home are also available.