Designers discover and learn generative design on YouTube; find AM to be complementary.

Designers discover and learn generative design on YouTube; find AM to be complementary. 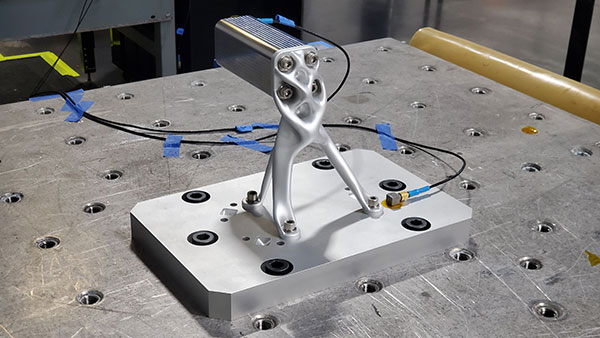 Carl Sagan once said, “All civilizations become either spacefaring or extinct.” In that sense, Ryan McClelland, research engineer for NASA’s Goddard Space Flight Center, is doing his part to prevent the extinction of humans.

A mechanical engineer by training, he described himself as “stronger in design than in analysis.”

The Instrument Systems Division where he works, he explains, is not like a typical car company. “We’re not making the same part over and over. We’re driven by nonrecurring engineering. With every mission, we’re making something new, whether it’s to measure something in the ocean or on the moon,” he says.

McClelland discovered generative design during the pandemic. With the free time he had during the shutdown, he was watching YouTube clips, exploring various software packages and delving deeper into additive manufacturing (AM). The role of AI in generative design and the unorthodox shapes produced by the method intrigued him.

“To me, those organic shapes are how things are supposed to look. Not the typical square objects with rounded corners,” he says. He currently uses Autodesk Fusion 360, an integrated design suite with cloud features and generative design tools.

How to Speak to Generative Design Algorithms

McClelland quips that his early trials of generative design “was like collaborating with a talented sculptor. He comes up with a beautiful shape but also blocks all your bolt holes.” But over time, he learned to encode standard NASA requirements, such as the required distance between bolt edges, and figured out ways to place obstacles in the right places to direct the outcome of the auto-generated shapes.

“As human engineers, we know these rules in our minds, but to find ways to make them explicit to the computer was sometimes a stumbling block.”

“You don’t need to be an FEA expert to run generative design software. Besides, if you’re a mechanical engineering student, you should understand basic loads and constraints.”

Ben Servey, a mechanical engineering student from Pennsylvania State University, worked alongside McClelland on a senior capstone project to design and prototype a part for the Off-Plane Grating Rocket Experiment mission.

“Experience with FEA helps, but is by no means necessary,” Servey says. “The biggest similarities between FEA and generative design is that you have to apply the forces and constraints, as well as general simulation setup, such as mesh size.”

Servey found the sequential setup of Autodesk Fusion 360’s generative design tools helpful. “This made it easy to know what the next step in setting up the simulation was,” he says.

Over time, Servey also learned certain correlations between the input and the outcome. For example, denser meshes tend to produce higher factor-of-safety values in his experiments. It would make generative design software much easier to master if the user interface includes popup tips and explanations “to explain how each of the different simulation settings might affect the results,” he says.

Many users have noted that generative design tends to propose solutions that human engineers might not have considered on their own. Some go so far as to describe the asymmetrical structures and membrane-like trusses seen in generative design studies as “alien geometry.”

McClelland put generative design to use to design a part for the NASA Exoplanet Climate Infrared Telescope (EXCITE) project, which aims to take spectrographic measurements of planets.

The prototype designs were produced in computer-numerically controlled (CNC) machines by Protolabs (three-axis) and Zero Hour (five-axis) and 3D printed by 3D Systems in Al10SiMg and A6061-RAM2 aluminum alloy. 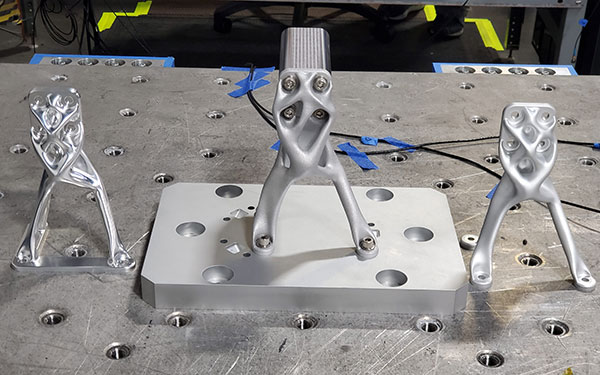 Three variations of a part for the NASA EXCITE project, produced by a five-axis CNC machine from Zero Hour (left), a printer from 3D Systems (center) and Protolabs (right). Image courtesy of Ryan McClelland, NASA.

Even failed generative design experiments gave McClelland valuable insights about the design. Sometimes the odd results forced him to reexamine whether the stress concentrations influencing the geometry were valid or artificial, whether they were the result of incorrect loading or unreasonable obstacles.

“My strategy is to first let the software run with all the freedom. If I don’t know where to put bolts, I first run it without specifying them. Then based on where the geometry touches, I’d say, maybe that’s where I’ll put my bolts,” he says.

Based on how he discovered generative design and learned at his own pace, McClelland urged software developers to enable easy access to training materials.

“I got 90% of the way just through YouTube videos. It’s important to make it easy to find the answer so users can, for example, search in Google and find out how to apply loads and constraints,” McClelland says.

See If You Can Figure It Out

Last year, Jeff Olsen, president of Hiller Measurements, was shopping for a stereolithography printer for prototyping. He flew out to Chicago to attend the Rapid + TCT Conference—one of the few in-person events that took place in the narrow window between the delta COVID variant’s decline and the omicron variant’s rise.

“When I got to the show, everyone was talking about generative design,” Olsen recalls. “I went to a few demos. Everyone seemed to be looking at it as a weight-saving method. But when I saw it, I thought of it as a way to collapse the workflow, to enable my design staff to complete in minutes what usually took weeks.”

Olsen’s software choice was PTC’s Generative Design Extension for PTC Creo software users. The technology came from PTC’s 2018 acquisition of the generative design startup Frustum. Olsen installed it on a laptop, then asked a staff member to figure it out. The chosen employee didn’t have much experience in analysis.

“After learning the software from YouTube videos, he came to me the next day and said, ‘I think I know how to run these generative design studies.’ Then he showed me a cellphone clip he designed with it, and I knew we could make this work,” recalls Olsen.

Generative Design Plus AM

In Olsen’s view, generative design and AM is an ideal combination that enables Hiller Measurements to vertically integrate formerly outsourced processes involving on-demand 3D printing bureaus. This also allows design iteration through trial and error—or, as Olsen puts it, “the print-and-break approach.”

Hiller’s staff put generative design to the test by designing a structurally complex radiofrequency (RF) relay-switch holder, used in wireless telecom operations. The ideal design must accommodate multiple relay switches with the shortest possible cable connections among them. Components should be positioned in the best orientation with greater freedom, rather than orthogonally laid out on aluminum trays as was done formerly. 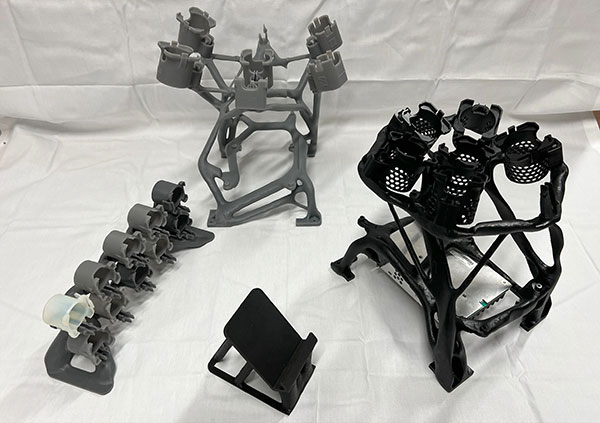 With the move to generative design plus additive manufacturing, Hiller Measurements has improved RF performance, reduced parts quantity by 90% and collapsed the design-to-finished-part times by a factor of 10. A single 3D-print design replaced over 10 aluminum panels and mounting mechanisms for power supplies, printed circuit boards and other components, Olsen points out.

Olsen confessed he would not have conceived the same design using his own knowledge and know-how, but in physical testing, the generative design solution performed well. Learning the software was less of a struggle; rather, giving up the traditional approach was the bigger struggle, Olsen explains.

“Making the potential paradigm shift enabled by generative design a reality will require both organizational/cultural changes and a broadening of available software capabilities to cover a broader range of design scenarios with generative design,” Walsh notes.

To help potential users determine if generative design is suitable for their projects, ASSESS published a checklist of key capabilities.

The organization points out that the generative design algorithms should consider “factors from multiple areas including operational performance, weight/mass, manufacturing, assembly or construction, usability, aesthetics, ergonomics and cost.”