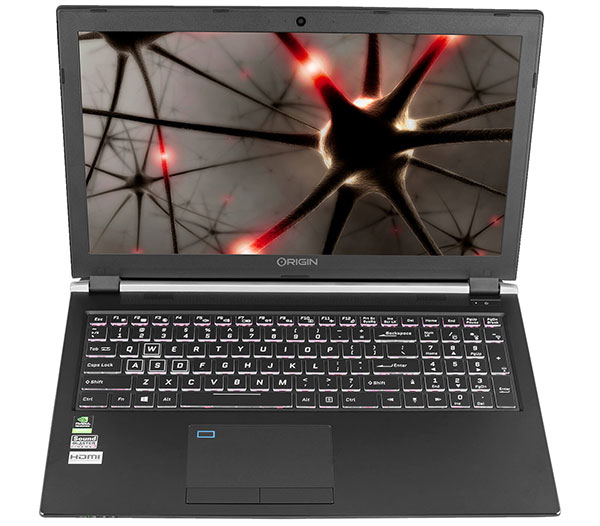 We have reviewed several workstations from Origin PC over the years, most recently its top-performing M-Class workstation (DE August 2018). So, when the Miami-based system integrator sent us a laptop to review, we were intrigued. Founded in 2009 by former employees of Alienware as a builder of high-performance gaming computers, Origin PC typically assembles its computers in the US using imported parts. But you can’t build a laptop the way you can a tower—by choosing a case and a motherboard and then assembling components into a roomy tower case. A laptop, on the other hand, is highly optimized, packing an array of parts into a compact chassis.

For this first-ever review of an Origin PC laptop, the company sent us its NT-15 Quadro, a thin and lightweight 15.6-inch system that certainly qualifies as a professional mobile workstation. The system we received came housed in a fairly utilitarian-looking aluminum case measuring 14.96x10x0.73 inches and weighing 5.02 pounds. Its 150-watt power supply (5.0x2.5x0.87 inches) adds an additional 1.29 pounds.

With a starting price of $2,569, the base configuration is already well-appointed, with a 2.2GHz Intel Core i7-8750HQ 6-core CPU (the only CPU offered), an NVIDIA Quadro P3200 with 6GB of GDDR5 memory, a 3840x2160 display, 8GB of RAM, and both a 250GB M.2 boot drive and a 2TB Seagate FireCuda flash-accelerated hard drive, all covered by a 1-year warranty. Extending the warranty coverage to 3 years brings the base price to $2,838. (Note that the base system typically includes a 250GB Seagate BarraCuda SSD. The 2TB data drive and a $57 price reduction were part of a promotion available at the time of our review.)

Options Both Outside and Inside 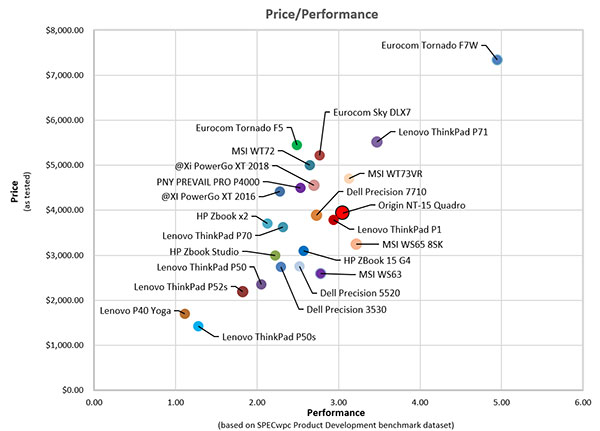 As we have seen when reviewing Origin PC’s tower workstations, there are lots of customization options, starting with the exterior. The charcoal gray surface color on the NT-15 we received is standard, but you can add laser etching for $50, a metallic paint finish for $175, or an artistic theme for $249.

Although the only display option is the UHD 3840x2160 IPS display, the screen in our evaluation unit had been professionally calibrated to ensure the most accurate color spectrum available, which added $29. Our NT-15 also came with the more powerful NVIDIA Quadro P4200 GPU, with 8GB of GDDR5 memory plus Max-Q design, adding $679. This laptop GPU provides 2304 CUDA cores, a 256-bit interface, and a bandwidth of 224GB/s while drawing a maximum of 115-watts. Max-Q is a new approach that enables OEMs and system builders to design laptops that are thin and power-efficient, while still delivering high-end graphic performance. The P4200 is also VR-Ready.

While the Origin PC NT-15 Quadro base system fills its two memory sockets with a pair of 4GB DDR4 2400MHz memory modules, the system we received was maxed out with 32GB of RAM, installed as a pair of 16GB Kingston HyperX Impact 2666MHz SODIMMs, which added $213.

The base model also includes a Samsung 970 EVO Plus PCIe NVMe M.2 data drive as well as a 250GB SSD. But Origin PC offers options, including PCIe drives of up to 1TB, SATA drives up to 2TB, and SSDs of up to 4TB capacities. Our evaluation unit included a 1TB Samsung 970 EVO Plus PCIe NVMe M.2 boot drive, a $179 option, and the 2TB Seagate FireCuda Flash Accelerated drive, which normally adds $134, but was free thanks to the aforementioned upgrade promotion.

Great Display and Lots of Ports

Lifting the lid reveals the 15.6-inch UHD display and an excellent backlit keyboard with 102-keys, including a separate numeric keypad. A rectangular power button is located in the upper-right corner, above the keyboard, with an LED that glows white when the system is powered on. A 1920x1080 webcam, centered above the display, includes an adjacent LED that illuminates when the camera is active. Instead of LEDs on the keyboard, however, messages briefly appear on screen when you use the Caps Lock, Number Lock, or Scroll Lock keys. A 4.25x2.5-inch touchpad with multi-touch capabilities and two dedicated buttons is centered below the spacebar, with a fingerprint reader located in its upper-left corner.

The right side of the case provides microphone and headphone audio jacks, a USB 3.1 Gen 1 Type-A port, a multi-card reader, and a standard RJ-45 jack for the built-in gigabit LAN. The left side of the case includes two additional USB 3.1 Gen 1 Type-A ports (including one that can be powered when the system is off but still connected to the AC adapter or when the battery charge is above 20%), a pair of USB 3.1 Gen 2 Type-C ports, two mini-DisplayPorts, an HDMI port, the connection for the AC adapter, an air vent, and a security lock slot. The front edge of the case provides power, battery, hard drive, and airplane mode status LEDs.

The NT-15 includes a Control Center app that lets you monitor the CPU, GPU and memory; adjust fan speed settings; select a performance profile; toggle selected components on and off; adjust the keyboard backlighting; assign keyboard shortcuts; and so on.

Like most other laptops we have recently received, the battery in the Origin PC NT-15 is not removable and the manual does not address any user-serviceable components. During our tests, the system remained cool and relatively quiet, although the fan noise reached 56dB during some of our tests. The 4-cell 55Whr battery kept the system running for just over 4 hours on our battery run-down test.

The Origin PC NT-15 performed well on all our benchmark tests. Thanks to its optimized GPU, its results on the SPECviewperf graphics performance benchmark placed it ahead of most of the other 15.6-inch mobile workstations we have tested. 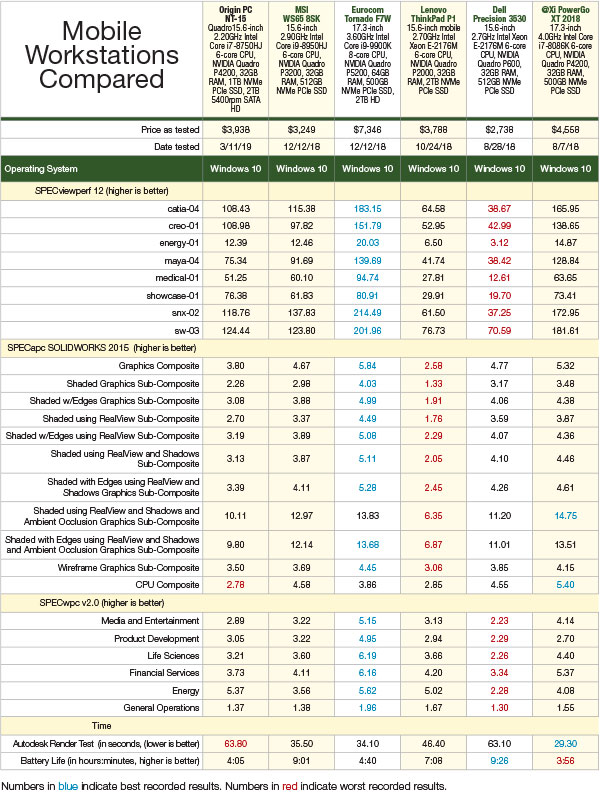 On the SPECapc SolidWorks benchmark, the NT-15 also did very well, although here its slower CPU placed it behind many of the other comparable 15.6-inch systems. On the very demanding SPECwpc workstation performance benchmark, the Origin PC system also lagged behind similar systems, again due to its more modest 6-core processor. Similarly, on our AutoCAD rendering test, the 68.4 second average rendering time was the slowest we’ve recorded in quite some time.

Origin PC is unique in that it offers to ship its systems in a wooden crate. Our evaluation unit did indeed arrive in such a crate, which would have added $41 to the system cost, and increased the shipping weight by more than 11 pounds—something that seems unwarranted for such an otherwise lightweight mobile workstation. We did not include the cost of the crate in our as-tested price.

Once we tallied everything, our system priced out at $3,938, making the Origin PC NT-15 Quadro one of the more expensive 15.6-inch mobile workstations we have reviewed. While it delivers good performance and a great display, its price and less-than-stellar battery life tempered our opinion. The MSI WS65 we recently reviewed delivered better performance, longer battery life, and less weight for a bit less money. Still, the Origin PC NT-15 Quadro is a powerful, lightweight mobile workstation with a plethora of options for engineers to customize.