The introduction of an external Quadro GPU gives those who prefer thin, lightweight devices the option to use a detachable GPU when needed. Image courtesy of NVIDIA.

The importance of photorealistic rendering is evident in the CAD-embedded rendering and visualization tools that have, over time, become a standard part of mainstream design software packages. Some, like SolidWorks and Autodesk Inventor, have integrated rendering tools that let you visualize the CAD model in a ray-traced rendered mode with the push of a button. Other packages let you incorporate rendering into the workflow through plug-ins to popular renderers like Luxion Keyshot or Chaos Group’s V-Ray.

Because rendering is a compute-intense operation, a rendering job can effectively disable an underpowered system, making it unusable for the duration of the rendering job. To avoid this, users need to have sufficient graphics-processing firepower. The requirement usually translates to a robust, bulky desktop system with multiple processors and GPUs (graphics processing units).

The introduction of an external Quadro GPU gives those who prefer thin, lightweight devices the option to use a detachable GPU when needed. Image courtesy of NVIDIA.

This demand is often in conflict with the user’s desire to work from thin, lightweight, connected devices, preferable not just for their portability but also for their aesthetic appeal. In this article, we look at various remote rendering and visualization options available. By detaching the access device from the point of compute, these methods allow users to harness workstation-class performance from thinner, lighter devices.

This August, at SIGGRAPH (Los Angeles, CA), NVIDIA unveiled external GPU (eGPU) offerings, to be delivered by partners Magma, Sonnet, AKiTiO and Bizon. Just like an external modem or storage drive, the independent, external GPU can be attached to a computing device. It requires a Thunderbolt connection.

External GPUs are not new, but the addition of NVIDIA Quadro into the available selection is a significant development. Previously, NVIDIA Quadro was available only as build-in GPUs in preconfigured systems—mobile and desktop workstations. The eGPU option brings Quadro to those who might prefer a thin, light, mobile machine, either for stylistic reasons or for costs, but still need the visualization power of a professional-class GPU.

The detachable option is particularly useful for those who need rendering and visualization occasionally. The eGPU gives such users the ability to plug or unplug the GPU as dictated by their needs.

“For those who have invested in thin and light notebooks, this is an easy way to get the power of NVIDIA’s most capable professional GPU. In doing so, you instantly supercharge your prosumer or consumer device to work with larger, more complex 3D models, run programs with interactive ray-tracing, run simulation, even create VR content,” says Sandeep Gupte, director of professional visualization.

Usually people think of remote rendering as rendering on an offsite server or in the cloud, but perhaps a powerful workstation could be used as a remote renderer. “The amount of GPUs you can fit into our high-end desktop chassis, the ThinkStation P920, lends itself to being a mini-HPC (high-performance computing) system on your desktop. If you don’t have a data center or IT resources to build a cluster, you could still use [the workstation] as your remote renderer, shared among several employees,” says Scott Ruppert, Lenovo’s workstation portfolio solutions manager.

The ThinkStation P920’s architecture can accommodate as many as three high-end GPUs, linked together via NVIDIA’s NVLink technology. NVIDIA describes NVLink as “a high-bandwidth, energy-efficient interconnect that enables ultra-fast communication between the CPU and GPU, and between GPUs.”

Lenovo also offers the ThinkStation P320 Tiny, roughly the size of a hardcover book. The small device features a GPU, the NVIDIA Quadro P600. It’s adequate to power CAD visualization, but not for rendering complex scenes. Ruppert proposes such a small device can be the everyday device you use to access the more powerful ThinkStation P920 for remote rendering and computing.

The software allows you to access and control a powerful GPU-accelerated desktop workstation from thin, lightweight devices; therefore, you could use this method to remotely render and visualize complex scenes from smaller connected devices. 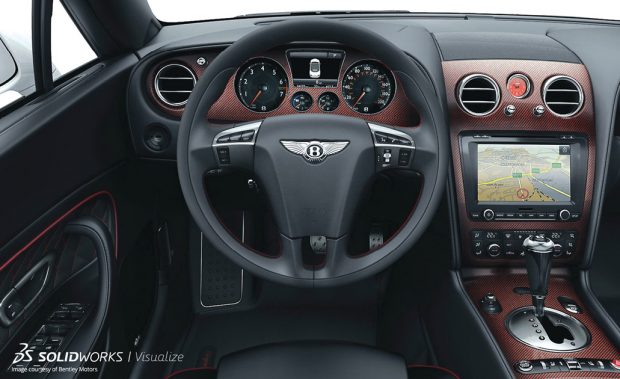 The reference to Quadro in its name warrants further explanation. NVIDIA’s GPU-accelerated servers are built on NVIDIA Tesla GPUs, not Quadro. Quadro is the GPU brand for discrete workstations. But with the help of vDCW software, you can create and support virtual machines (VMs) that work and behave like NVIDIA Quadro-powered workstations, though they’re in reality running on Tesla-powered hardware. In other words, the VMs will have Quadro characteristics, but are running on Tesla under the hood.

vDCW provides up to “24GB of GPU memory for working with large, immersive models,” NVIDIA states. Because VMs are accessible from mobile devices, it offers users a way to get the same visualization and rendering power found in Quadro-powered machines without having a physical desktop workstation.

Many rendering applications, such as Luxion’s CAD-friendly Keyshot and SolidWorks’ CAD-embedded rendering function, include a network rendering mode, which gives users the ability to compute the rendering job on a pool of machines instead of a single machine. Because it harnesses the power of a greater number of processor cores than what is available in a single machine, this option speeds up the rendering job significantly. However, it requires that the users have access to an internal server or an on-premise cloud.

With some rendering applications, users have the option to tap into on-demand cloud resources. As part of its subscription, Autodesk offers cloud services, which give users the option to send rendering jobs to remote servers maintained by Autodesk. The cloud-rendering feature is available to subscribers of the Autodesk architecture collection, media and entertainment collection, and product design collection, among others.

With network rendering and cloud rendering, it is important to know the underlying renderer’s technology. To accelerate jobs on a CPU-based renderer like Luxion Keyshot, you would need to designate more CPU cores to the network cluster or the cloud-hosted cluster. By contrast, GPU-accelerated renderers like Octane, Iray, Chaos Group’s V-Ray and Nextlimit’s Maxwell are significantly accelerated by GPU cores.

Remote rendering is also available in browser-based options from vendors such as Clara.io and Lagoa. The software-as-a-service style renderers usually let you upload your 3D CAD model to the server, apply materials and backgrounds, then finish the rendering job online. With this approach, the computing power of the user’s own device is irrelevant. Therefore, those working from Google Chromebooks, iPads or tablets may remotely render complex scenes without being hampered by the lack of cores in their own system.

Whereas vendors like Clara.io and Lagoa offer robust model-preparing and editing tools, material libraries and high-definition backgrounds to build a scene from the ground up (so to speak), vendors like Rendercore offer on-demand, remote hardware without any online rendering software. The company’s tiered pricing is based on priority—the speed with which you want your job to be completed. Premium (high priority) jobs are priced $0.25 per core per hour; economy (low priority) jobs are $0.15 per core per hour. With monthly and weekly passes (monthly, $379; weekly, $139 per node), the per-core pricing can be as low as $0.01 per GHz hour.