Maplesoft describes the 2017 edition of MapleSim, its advanced system-level modeling tool, as a major new release. Key enhancements cited by the company include improved development and analysis tools that enable easy creation of digital twins and other virtual prototypes. In related news, the company also announced MapleSim Explorer, a new deployment solution that makes MapleSim models available throughout engineering organizations.

MapleSim can be used across a wide variety of applications and industries to create physics-based, high-fidelity virtual prototypes known as digital twins. Because MapleSim’s digital twins do not require test data to predict behavior, they can be used for conceptual design as well as validating product performance, design changes and diagnostics, Maplesoft explains. Version 2017 sees additions to the MapleSim collection of built-in interactive model analysis tools, including a new Initialization Diagnostics App and a new Modal Analysis App.

The Initialization Diagnostics App is intended to provide insight into the initialization process to help engineers determine how the initial values are computed and what actions are needed to adjust them. The Modal Analysis App is for exploring and understanding the natural vibration modes of a mechanism. This can help engineers identify which modes will have the biggest impact on the design and determine how to reduce the vibration in the final product, the company says.

MapleSim 2017 introduces a code editor for the Modelica open standard for describing components and physical models that, Maplesoft says, makes it easier to create Modelica-based custom components. Version 2017 also offers new options to simplify the creation of custom analysis tools and enhanced support for connectivity with other modeling tools through FMI (functional mock-up interface) exports. The MapleSim toolbox for importing CAD models has been upgraded to provide support for the latest versions of major design environments such as CATIA, Inventor, NX, Solid Edge and SOLIDWORKS. 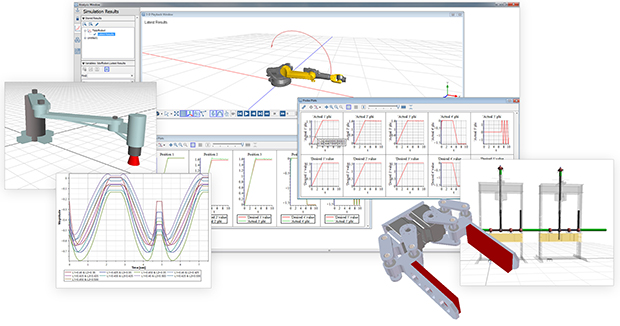 MapleSim’s visualization tools let you investigate and plot any model variable, view 2D simulation results and 3D simulation animations as well as analyze your model. These abilities are also available through the new MapleSim Explorer, a standalone solution that makes MapleSim models available throughout engineering organizations. Image courtesy of Maplesoft.

A new add-on component library, the MapleSim Heat Transfer Library from CYBERNET, makes it debut in MapleSim 2017. This library, Maplesoft says, provides a comprehensive view into the heat transfer effects present in a model, enabling engineers to refine their design to improve performance and avoid overheating. Other improvements include more than 100 new components as well as expanded Electrical and Magnetic libraries.

“Maplesoft is committed to helping companies translate their engineering expertise into a system-level modeling tool, so they can truly reap the rewards that come from using this approach,” said Dr. Laurent Bernardin, chief operating officer and chief scientist at Maplesoft, in a press statement. “MapleSim helps companies use digital twins and other virtual prototypes to get key insight along the entire engineering design process. It also helps organizations capture, deepen, preserve and leverage their engineering knowledge, so they avoid common pitfalls and experience success in their modeling projects.”

Maplesoft is a subsidiary of CYBERNET Systems Group.

Check out the MapleSim video library.

See why DE‘s Editors selected MapleSim 2017 as their Pick of the Week.