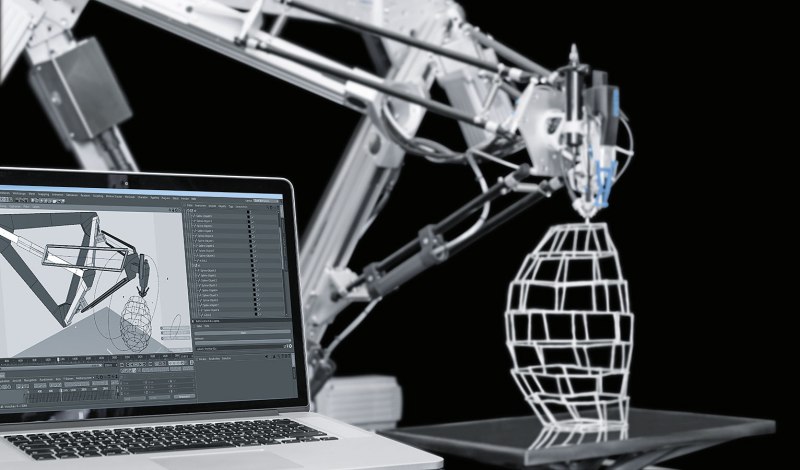 The 3D Cocooner offers true freeform fabrication with its novel approach to AM. Courtesy of Festo.

There must be something in the air. It isn’t unusual for research to be inspired by nature, but two different companies have recently released information about projects that are related to spinning synthetic webs. It’s like the industry has spiders on the brain.

This time around the company’s name is Festo, and it has produced an additive manufacturing (AM) system called the 3D Cocooner that really is all about freeform fabrication. In place of plastic layers or material vats, Festo uses thread and UV resin to produce three dimensional objects that can be built without requiring support materials. Rather than an extruder head, the 3D Cocooner has a “spinneret” that delicately weaves freestanding structures.

The 3D Cocooner offers true freeform fabrication with its novel approach to AM. Courtesy of Festo.

Perhaps in an attempt to reduce the ick factor of comparing its new system to spiders, Festo has chosen to associate it with caterpillars. Who doesn’t like a butterfly?

“Just like a caterpillar, it spins filigree figures and customised lightweight structures from a fibreglass thread,” said Dr. Elias Knubben, head of corporate bionic projects. “The spinneret is precisely controlled by means of a handling system. As soon as they leave the spinneret, the sticky fibreglass threads are laminated with UV-hardening resin and are joined together to form complex structures. Unlike with other 3D printing processes, these structures do not arise in layers on a surface but are created freely in three-dimensional space. This is something quite special.”

In practice, the 3D Cocooner almost acts like a 3Doodler with a guidance system. Once a design has been finalized using the company’s parametric design software, the system’s kinematic arm and “spinneret” attachment goes to work building the design from the bottom up. Segments where future threads will need to be connected are left uncured long enough to complete a build. The result is somewhat similar in appearance to a CAD mesh made solid.

As far as practical applications go, the 3D Cocooner could certainly be used for artistic purposes, either by creating new artwork or by adding artistic flourishes to existing objects. It’s also possible that the system could become part of the 3D printed clothing movement. Assuming the final product is durable enough, it could also be used for home decoration purposes, as part of furniture or custom decorative elements.

Below you’ll find a video about the 3D Cocooner.