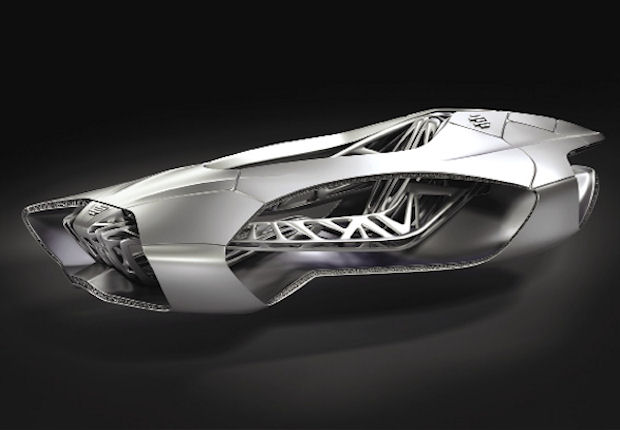 The Genesis concept vehicle is designed to be manufactured as one singular part.

Additive manufacturing (AM), or 3D printing, is bringing about a revolution. As the technology matures, the value in AM continues to move past rapid prototyping to full-scale production of end-use parts. Some companies have already embraced the revolution and begun to shift the focus of research and production facilities in accordance. GE is one of the leaders in this area, and has invested heavily in AM, including the construction of new plants devoted to advanced manufacturing, and plans for a dedicated research facility in Pennsylvania.

The revolution doesn’t start with manufacturing. It starts with design. Old ways of thinking about how a part or product must be designed to account for traditional forms of manufacturing will be replaced by a new design freedom. Complex parts designed with traditional manufacturing methods in mind were often broken down into multiple pieces. Each piece required its own pre and post-production process, followed by final assembly into a completed part. The same part built with AM can often be designed and manufactured as a single piece, reducing material waste, production costs and time to market.

Two of the industries set to profit the most from the coming revolution are aerospace and automotive. While GE Aviation is one of the leaders in aerospace, EDAG, a design and engineering firm based in Germany, is devising a path to the future for automotive AM with its Genesis project. The project represents the results of a think tank that included experts from Fraunhofer, Laser Zentrum Nord and the DMRC Paderborn. The goal of the project was to examine the state of AM and predict how the technology will impact automotive design and production.

The findings were published in an EDAG white paper titled, “EDAG Insights: Additive Manufacturing,” and are summarized in the following passage from that paper.

“Additive manufacturing enables parts to be designed so that they are load-specific, multifunctional and bionic, while ensuring ideal wall thickness and outstanding material properties. Working directly from data models, tool-free, highly flexible production is possible. Weldable metals and plastics developed to be suitable for specific applications will pave the way to future applications.”

EDAG’s group of experts are certain that new methods of designing for AM will evolve, as more designers embrace the freedom of design possible with 3D printing. This includes new and improved tools for design. Most CAD programs are still rooted in the old engineering and design philosophies developed for tool-based, traditional manufacturing methods. As more companies embrace AM for production, new tools will need to be developed to fully leverage the flexibility of 3D printing.

It is, of course, easy to call for innovation, or to wait for the present to catch up to your vision for the future. Rather than stand on the sidelines, EDAG has stepped up to its own challenge and developed a proof-of-concept model. The ultimate aim of project Genesis was to design a vehicle using new design philosophies and manufacturing techniques. In this case, EDAG’s team looked to nature for inspiration. The firm refers to this as bionics (it has also been labeled biomimicry), and it is the process of applying biological principles to design philosophy.

After some debate, the team settled on the humble turtle to act is its muse. A turtle’s shell has evolved to act as armor while still being light enough to allow for mobility. A cross section of a turtle’s shell reveals a system of delicate interior bone structures that offer durability while reducing the overall weight of the shell. The question soon became whether an automobile could be designed and constructed using a turtle’s shell as a model.

“At the very beginning, we had to justify our decision to take a ponderous turtle as the basis of an idea for a car,” said Johannes Barckmann, chief designer and bionics innovator at EDAG, in a blog post. “Under water, turtles are skilled swimmers, but on land they are not the fastest of creatures. But what really persuaded us to take the turtle’s shell as the inspiration for Genesis was the simple fact that what we are talking about here is a kind of passenger safety that nature has perfected over the course of millions of years. No engineer could come up with an idea like that!”

Basing the design on the structure of a turtle’s shell offered a chance for significant lightweighting. Earlier testing by EDAG and Laser Zentrum Nord had shown that AM can reduce the overall weight of a part even if that part wasn’t originally designed to be built with 3D printing. A joint effort at building a lighter multi-functional housing part for an electric vehicle resulted in a weight reduction of 1000 g. Project Genesis took that idea forward by applying AM design principles from the ground up to develop an entire vehicle body to be built in one part.

With a design in place, it then fell to EDAG to determine which AM process and material would best fit its needs. The think tank evaluated Fused Deposition Modeling (FDM), selective laser melting, stereolithography and selective laser sintering based criteria that included component size, ecological performance, structural relevance, tolerance and production costs. While it might be assumed that FDM would lose out in such a head-to-head competition with metal AM processes, EDAG’s team found that FDM may well be the AM process best positioned for large-scale 3D printing, both now and in the future.

EDAG suggests that, in the future, FDM thermoplastics might be “boosted” with carbon fiber during the production process to increase strength and durability. The think tank also concluded that FDM was well suited for building lightweight structures that minimize internal support to reduce weight. Like the turtle shell, FDM parts can be strengthened by a complex honeycomb-like internal architecture, in place of parts that have been manufactured using traditional methods that are completely solid, heavier and more expensive to produce.

The resulting Genesis concept vehicle is part FDM shell, part artistic sculpture. It proposes that AM will be a major factor in the future of automotive manufacturing, and provides a glimpse into one way to create lightweight, yet robust, parts of all sizes while keeping material costs low. The project also highlights the idea that weight and material savings begin in design.

Following the success of the EDAG GENESIS, engineering specialists at EDAG have expanded their vision of a bionically inspired body structure via additive manufacturing.

The EDAG Light Cocoon concept study is “an unprecedented projection of the ultimate in future lightweight construction,” according to the company. The vehicle structure is combined with a weatherproof textile outer skin panel that is backlit to illuminate the skeleton-like, organic structure.

“We are pursuing the vision of sustainability—as demonstrated by nature: lightweight, efficient and without any waste,” explains EDAG’s head designer, Johannes Barckmann, in a press statement. “The result: the EDAG Light Cocoon presents a stable, branch-like load bearing structure from the 3D printer, which only uses material where it is absolutely necessary.”

EDAG says its simulation experts carried out static and dynamic calculations for the basis of the topologically optimized ideal structure. The EDAG designers took a leaf as their inspiration for the lightweight outer skin.

“The Jack Wolfskin material supports maximum lightweight design requirements with minimum weight,” says EDAG CTO Jörg Ohlsen of the outer skin. “To give you a comparison: this extremely strong material is four times lighter than standard copier paper. Combined with the topologically optimized, additively manufactured structure, it offers enormous potential and stimulus for the ultimate lightweight construction of the future.”