Big Compute 20: Tackling the Big Issues for a Better Future 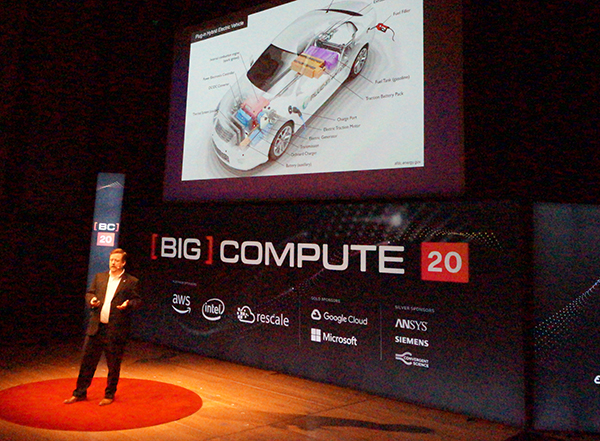 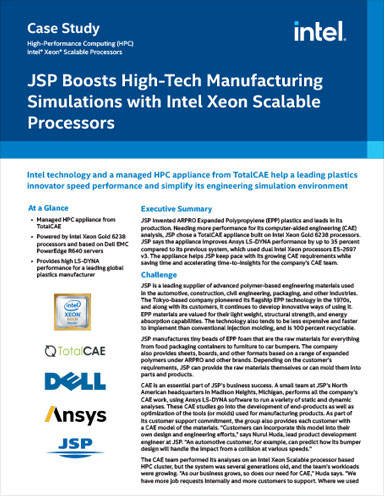 TotalCAE Enabled JSP to Focus on Engineering and not IT Complexity
JSP, a leading innovator of ARPRO®, saw up to 35% more simulation throughput for LS-DYNA and worry-free IT with...
Sponsored Content

In the early morning hours of Wednesday February 11, Big Compute 20 got underway. On the upper level of the SF Jazz performance venue, executives, researchers, and software developers mingled over cookies and coffee as they waited for the keynote. Later, Joris Poort, CEO of Rescale, took the 350-seat auditorium to open the event, dedicated to exploring the use of high performance computing (HPC) in various sectors.

“Think about the innovation that was promised to us in science fiction, in popular movies like Back to the Future. What among these have come true?” asked Poort. The time-traveling car and the hover board have not yet come true but others, such as “real time videoconferencing and ubiquitous communication” have become part of our lives, he pointed out.

“Not only have we delivered that; we've got much more. Social media, the gig economy, services like Uber, Twitter, and Airbnb have truly connected us and changed our lives,” he noted.

But there's also the nagging feeling that, as engineers, we may have misallocated our talent and priorities. In 2012 November/December MIT Technology Review, former astronaut Buzz Aldrin penned an article titled “The Imperative to Explore.” His stern face on the cover called out, with bold letters: “You promised me Mars colony; instead, I got Facebook.”

Poort urged attendees to turn their attention to big issues. “If you look at the U.S. in the last ten years, life expectancy has been going down. This is a real challenge we need to overcome. And sustainability and climate change—even with the impending doom of climate change, we have yet to deliver the innovations to fix this challenge. These are fundamental to the future,” said Poort.

According to a study published in November 2019 by the Journal of American Medical Association, “Between 1959 and 2016, US life expectancy increased from 69.9 years to 78.9 years but declined for 3 consecutive years after 2014.”

Neither human intellect nor data is lacking to tackle these challenge, in Poort's view. The challenge “I would say is Big Compute,” he argued. “This is why we founded the company Rescale 10 years ago.”

The terms, as defined by Poort, clarify what he sees as the type of computing jobs that demand Big Compute.

“Loosely coupled problems, the kind that you can chop up into pieces and solve them on individual processors, are what hyperscale computing services are built to address,” he reasoned. On the other hand, “there are classes of problems that we cannot chop up into pieces to solve. Individual processors have to make the calculation, and communicate with one another as they start solving these algorithms. From fluid dynamics and aerodynamics to finite element analysis and structural crash simulation ... they depend on physics, and physics scales differently,” he added.

Two years ago, at its premier user gathering called Rescale Night in San Francisco, the company began using the term Big Compute. Microsoft, one of the sponsors of the event, defines the term more broadly, as “large-scale workloads that require a large number of cores, often numbering in the hundreds or thousands” in its online page for Microsoft Azure.

Don't Write Off the Combustion Engine

If he were given access to infinite computing power, Convergent Science's Senecal would like to reinvent the internal combustion engine. “The greenest engine possible—an engine we can hug and feel good about,” said Senecal.

“99% of the vehicles on the road are powered by internal combustion engines,” Senecal estimated, pointing out that completely writing off the technology might be impractical.

The key to reinventing the combustion engine is to find the perfect flame—to simulate and refine the thermal behavior inside the engine.

“The engine has hundreds of variables—spark timing, fuel injection, airflow, geometric parameters—too many to name. We need to find the optimal [configuration]. This is where infinite computing can help us,” said Senecal.

Senecal plans to use a combination of machine learning and CFD (computer fluid dynamic) to generate hundreds of design options for greener combustion engine.

Big Compute ran for two days. The event was sponsored by ANSYS, Microsoft, Intel, and Siemens, among others.

Walt Hearn, VP of @ANSYS at #bigcompute20 — too many miles to physically test-drive for autonomous carmakers. #Simulation #BigData pic.twitter.com/LPi39LmlHe 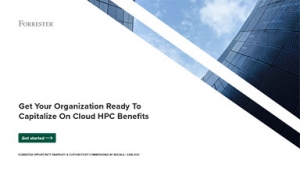 Get Your Organization Ready To Capitalize On Cloud HPC Benefits
2021 Forrester Consulting Study.
Sponsored Content
Combining AI+HPC for Real-World Breakthroughs
Rescale and Google Cloud Platform have partnered together to offer the widest range of GPU and CPU classes needed to apply AI capabilities to HPC workloads.
Sponsored Content
Cloud Adoption is Driving HPC Toward Digital R&D
High Performance Computing is a massive industry ($55 billion by 2024) that is the lifeblood of research and science innovation. From supersonic jets to developing cures for pandemics – research engineers rely on HPC for algorithmically complex workloads running on massive datasets.
Sponsored Content
Enabling Large Scale Multidisciplinary Design Optimization with the Cloud
In this webinar, Professor Joaquim R. R. A. Martins from the University of Michigan’s Aerospace Department shares his perspectives on the promises and challenges of MDO and showcase his lab’s cutting edge work in MDO applied to aircraft...
Sponsored Content
2021 State of Cloud HPC Report
Insights, statistics, and sentiments from leading high performance computing practitioners.
Why Digital Twins Need to Call the Cloud Home
The Cloud Connects Real-World Data to Digital Replica
Rescale Company Profile