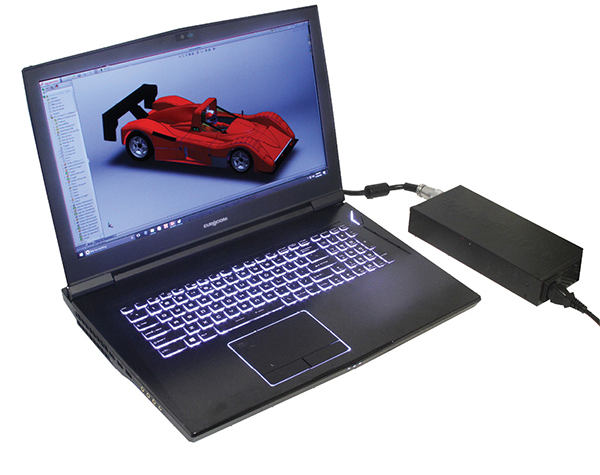 The Eurocom Tornado F7W is big, fast and extremely powerful. It is also very expensive and comes with a very large 780-watt power adapter. Image courtesy of David Cohn.

Eurocom has always impressed us with its ability to deliver some very powerful mobile computers. Though with the system that recently arrived at our lab, the Canadian system integrator has taken mobile workstations to an entirely new level. Like the 15.6-in. Tornado F5W that we reviewed last year (DE, July 2017), the new 17.3-in. Eurocom Tornado F7W includes a LGA1151 socketed CPU, enabling the system to support the latest Intel Core or Xeon processors.

But the new Tornado F7W—Eurocom calls it a mobile super workstation—also provides a choice of NVIDIA Quadro GPUs (graphics processing units), four memory sockets and it supports up to 22TB of storage with five physical drives.

The Eurocom Tornado F7W is based on an Intel C246 chipset and looks nearly identical to the @Xi PowerGo XT mobile workstation we recently reviewed (DE, November 2018). That system, which broke most of our previous benchmark records, was actually manufactured by Taiwan-based MSI. The Eurocom Tornado F7W appears to use the same MSI chassis as a base.

With a starting price of $3,499 (without an operating system), the Tornado F7W base configuration is already a powerhouse, with a 3.7GHz Intel Xeon F-2176G CPU, an NVIDIA Quadro P3000 GPU with 5GB of discrete memory, 16GB of error-correcting code (ECC) system memory, a 17.3-in. 1920x1080 FHD display and a 1TB 7200rpm SATA hard drive. But that’s just the starting point, and the review system that Eurocom sent us contained a host of more powerful components.

The Eurocom Tornado F7W is housed in a sculpted charcoal gray case, which measured 16.85x12.3x2.0-in. and weighed 9.4 lbs. Although the base configuration includes a 330-watt power supply (which we assume is similar to the 2.75-lb. adapter supplied with the @Xi PowerGo XT), the 780-watt power supply provided with our Tornado F7W evaluation unit was even bigger, measuring 9.25x4.37x1.62-in. and adding another 4.1 lbs. This huge device even had its own internal cooling fans and brought the total system weight to 13.5 lbs.

Price vs. Performance of Recent Workstations 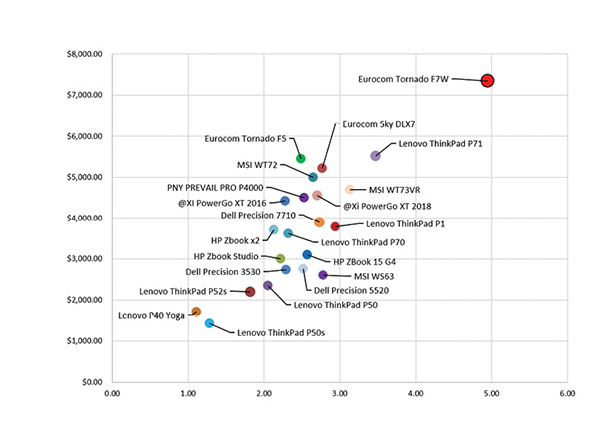 A 4.25x2.5-in. gesture-enabled touchpad with a pair of buttons and fingerprint reader is centered below the spacebar. Centered above the display is a 2-megapixel webcam and microphone array. There are also a pair of speakers for the integrated audio plus a subwoofer. A V-shaped power button is located in the upper-right corner above the numeric keypad and glows when the system is powered up. Four additional buttons below this let you switch between the discrete and integrated graphics, increase the fan speed and launch predefined programs. Small LEDs illuminate to indicate caps lock and number lock.

The right side of the case provides a pair of USB 3.1 ports, a Smart Card reader, a six-in-one card reader, a security lock slot and a large ventilator grille. The left side houses a similar air vent as well as three additional USB 3.1 ports and four audio jacks (line-in, line-out, microphone-in and a headphone jack, which doubles as an S/PDIF connector).

The rear panel includes an RJ-45 network connector, a mini DisplayPort, an HDMI port, a Thunderbolt (Type-C) port (which supports USB 3.1, DisplayPort 2.1 or HDMI 2.0), a power connector and two more large air vents. There are also lots more air vents on the bottom of the case.

Three LEDs along the front edge of the system indicate when Wi-Fi is enabled, battery status and hard drive activity. Despite its size, there is no provision for an optical drive (Eurocom sells optional external DVD and Blu-ray drives) and the battery is not user accessible.

In addition to the Xeon CPU in the base configuration, Eurocom offers a choice of six other 9th-generation processors, including the even faster 3.8GHz Xeon E-2186G as well as four different Core i7 processors. But for our evaluation, Eurocom included an Intel Core i9-9900K CPU. This eight-core Coffee Lake processor, which was just launched during the fourth quarter of 2018, includes 16MB of Smart Cache, a maximum turbo frequency of 5.0GHz and a thermal design power (TDP) rating of 95 watts. This processor, which also includes Intel UHD Graphics 630, added $250 to the total cost.

Although the base unit comes with 16GB of ECC memory using a single small outline dual in-line memory module (SODIMM), systems based on a Xeon CPU can accommodate up to 64GB of ECC memory using four 16GB memory modules. Systems like the one we received (equipped with an Intel Core CPU), however, can accommodate up to 128GB of RAM, using four 32GB DIMMs. Our evaluation unit came with 64GB of memory, using four Kensington 16GB DDR4-3200MHz SODIMMs, which added $900.

All versions of the Eurocom Tornado F7W include an NVIDIA Quadro discrete GPU and all but the P3000 included in the base configuration are VR-ready. There are five other NVIDIA Quadro graphics boards to choose from, including the Quadro P5200 provided in our evaluation unit. That high-end Pascal-based GPU includes 16GB of GDDR5 memory and 2560 compute unified device architecture (CUDA) cores and increased the system cost by $1,337.

The base configuration includes a 1TB SATA drive, but that’s just the starting point. The Tornado F7W can accommodate up to three M.2 drives. Eurocom offers 12 different M.2 drives ranging from a 32GB Intel Optane drive to a 2TB Samsung drive. Our evaluation unit had a 500GB M.2 Samsung 970 EVO NVMe solid-state drive, which added $333. The system we received also included a 2TB Seagate Hybrid 2.5-in. drive, which added $58.

Eurocom offers standard drives ranging from 512GB to 8TB and the Tornado F7W supports up to two hard drives in addition to the M.2 solid-state drives, for a total of up to 22TB. Or, when equipped with multiple drives, both the M.2 and SATA drives can be configured as RAID arrays.

With its fast eight-core CPU and high-end GPU, we expected the Eurocom Tornado F7W to deliver great performance, but its benchmark results blew us away. On the SPECviewperf test, which measures pure graphics performance, the Tornado F7W not only delivered the highest scores we have ever recorded for a mobile workstation; its scores on all but two datasets surpassed those of the fastest desktop workstation we have tested to date.

Its performance on the SPECapc SolidWorks test did not set records, but its results were near the top among both mobile and desktop workstations. On our AutoCAD rendering test, the 34.1-second average time was less than 5 seconds behind that of the @Xi PowerGo XT and just 10 seconds slower than the fastest over-clocked single-CPU workstation we have ever tested.

And on the very demanding SPECwpc workstation performance benchmark, the Eurocom Tornado F7W outperformed every other mobile workstation we have ever tested. It not only delivered record-setting results on nearly every component of this very demanding test, but its results rivaled those of many desktop systems. 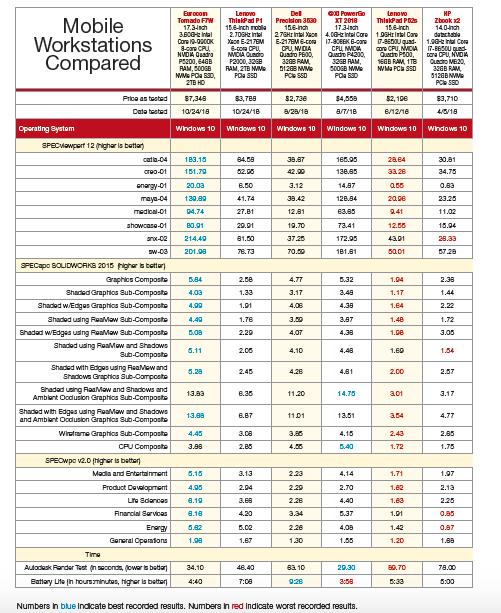 Of course, its record-setting performance comes with a very hefty price tag. As equipped, our Eurocom Tornado F7W would cost $7,346, including $166 for the Windows 10 Professional 64-bit operating system that came preinstalled. Since the base price only includes one year of return to factory depot warranty coverage and support, our as-tested price also includes $313 for a 3-year warranty.

After tallying the numbers, not only is the Eurocom Tornado F7W the fastest mobile workstation we have ever tested, it is also the most expensive. Although it certainly earns its claim as a “super mobile workstation,” clearly up to the task of replacing all but the most powerful desktop workstations for power users on the go, the Eurocom Tornado F7W will likely appeal to a small but demanding set of users who prefer performance much more than a lower price.