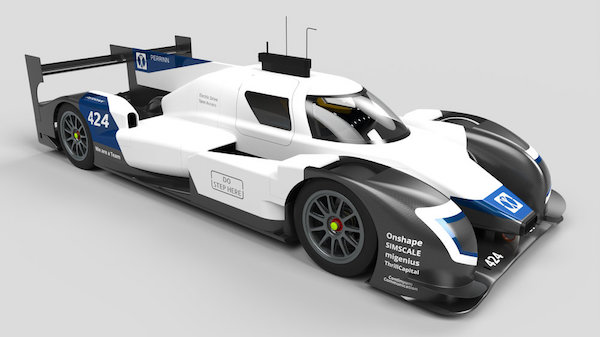 Engineer and aerodynamicist Nicolas Perrin wants to build the world’s fastest electric and autonomous Le Mans Prototype race car, and he’s taking an interesting path to do so—an open-access design approach that involves a dispersed and disparate group of contributors, all working together using cloud-based tools and Perrin’s own online communications platform.

Perrin’s Project 424 is about to enter the build phase, and he hopes to commercialize his communications platform for other similar projects, as well as in other markets.

“The most significant thing about Project 424 is that everything is developed on the Internet,” Perrin says. “We’ve involved partners that can come from anywhere in the world. It’s a new way of developing a car.”

In September, Perrin’s Project 424 announced that Onshape, SimScale and migenius had become part of the project team. The entire design of the vehicle is publicly accessible and available for viewing via Onshape’s cloud-based CAD software. SimScale’s CAE cloud-based platform is integrated with OnShape for design validation. The migenius RealityServer will provide realistic 3D rendering and virtual prototyping. 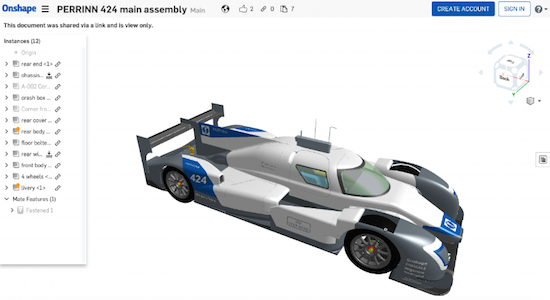 Using Onshape allows Perrinn Limited (Perrin adds an extra “n” to the company and website) to instantly share its car designs without users having to purchase or install CAD or other types of software. According to Onshape, non-CAD users can follow the project and designers can access the model through the cloud. image courtesy of Onshape.

“We had a shared view about how people should work with design data,” says Andy Morris, head of product design Onshape in the UK. “Nick [Perrin] felt that if we could go to a model of sharing, if we could get a great number of contributors, then we could get more innovation and reduce the cost of developing these vehicles. What he was struggling with was finding an application to support this vision.”

Perrin turned to Onshape, which provided the flexibility and accessibility he needed. However, there was still the issue of team communication, and it was that challenge that led to the creation of the Perrinn.com platform.

Design Collaboration and Communication are Key

“People need a better way to communicate with collaborators that allows more flexibility. The communication system is key, because it has to be the right solution in order to attract the right people for the project.”

With the decentralized nature of the collaboration, communication has been critical to achieve Perrin’s goal of accelerating the design process while also reducing costs.

“Because we have collaborators working from different locations, we’ve evolved into having our communication system in the Perrinn.com platform. It’s a communication and exchange platform similar to a chat system, somewhat similar to WhatsApp, but we also have a digital token in the platform,” Perrin says. “It’s accessible by anyone for a very small fee. It allows data and communications to go much further than just Project 424. We’ve created the tool for a wider community of people who might want to use it later.”

Perrin says he’s seen interest in the Perrinn.com platform from the engineering community, universities, software companies and others. It can even be used for communications among smaller groups (like sports teams or even families), or for human resources recruiting projects.

“Communication is one of the biggest challenges,” Perrin says. “People need a better way to communicate with collaborators that allows more flexibility. The communication system is key, because it has to be the right solution in order to attract the right people for the project.”

Onshape worked closely with Perrin and improved their own tools to meet his need for complex geometries. “We were actually surprised he wanted to model the whole vehicle inside Onshape,” Morris says. As Perrin’s need for more complexity increased, Onshape was able to adapt its software to meet his needs—and open up those improved features to all other Onshape users as well.

Morris and Perrin believe that this approach to engineering could change the way the design process works. “This isn’t open source, it’s open access,” Morris says. “Nick and his team want to be in control of what the master model looks like and how it behaves, but he wants to be able to share that data in an open format and let other people work on it.”

“Globally, we need to work like this,” Perrin says. “Being able to do things on the internet is a massive step forward, but we need to get to the next level of data access that can create new opportunities and new types of high-quality jobs. We want to create a good experience for people that work this way. It’s better than going to an office. This transition is coming over the next 10 or 20 years, and we want to be a part of it.”

Perrin also announced that he was forming the Perrinn ThrillCapital Motorsport Technology Hub to help apply the technology and processes created under Project 424 to connect businesses, universities and other organizations, as well as help commercialize new technology.

As for the Project 424 vehicle, the design process is completed and Perrin says the team is preparing to begin construction of the car.

“There are some different milestones we’re working toward, because there will be rules for electric vehicle racing published in 2024,” Perrin says. “Before that, we want to build the car and start setting speed records, as well getting the team up to speed before we can race.”