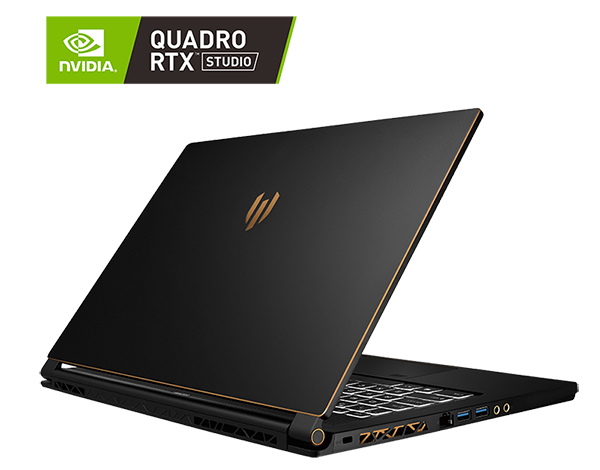 For most people, buying a computer is similar to buying a car. There is a list of specs from the logical side of the brain, and a bit of style desired by the aesthetic side. Then there are the aficionados among us who turn every spec and every bit of style into a quest for passion realized as a product. For those people, we offer the new MSI WS65 mobile workstation as our Editor’s Pick of the Week.

MSI was first out of the gate with support for the latest NVIDIA Quadro mobile GPUs. Maybe you’ve heard about NVIDIA’s breakthrough in real-time ray tracing. You can find it in the MSI WS65, a mobile workstation equipped with the NVIDIA Quadro RTX 5000, the next-generation top-of-the-line mobile GPU. Until now, ray tracing has only been available as a separate sidestep in the creative process. But now all that calculating of every light ray bouncing from object to object in the 3D scene creating reflections, refractions and shadows can be done in real time.

The mobile versions of the RTX 5000 line have the same basic specs as NVIDIA’s desktop models, re-engineered for the tight confines of the notebook workstation form factor. That means 3,072 CUDA cores, 48 RT (ray tracing) cores, 384 Tensor cores and 16GB GDDR6 RAM. This is an ideal configuration for heavy graphics applications in CAD and CAE.

The WS65 and its siblings in the WE and WP series all come with 9th gen Intel Core i9 processors. The match of Core i9 and Quadro RTX will provide performance for the most demanding applications in artificial intelligence, 8K video editing, AR/VR content creation and CAD/CAE visualizations.

MSI mobile workstations are as rugged as they are smart. They are certified for the U.S. Military Standard MIL-STD-810G, a testing guideline for withstanding severe conditions including humidity, temperature extremes, altitude, vibration, shock, sand and dust.

The MSI WS65 mobile workstation also ships with the company’s exclusive Creator Center software, which gives users the ability to adjust performance settings for specific applications, including SolidWorks, CATIA, AutoCAD and ANSYS products. Creator Center has four modes: High Performance; Balanced; Silent and Super Battery. Users can also select a key combination shortcut for any of these scenarios, and customize each setting for preferences like fan mode and panel/keyboard brightness.

There is more to share about specs and aesthetics for the WS65; find it in today’s Product Brief. Thanks for reading. We’ll see you next week with another Editor’s Pick of the Week.