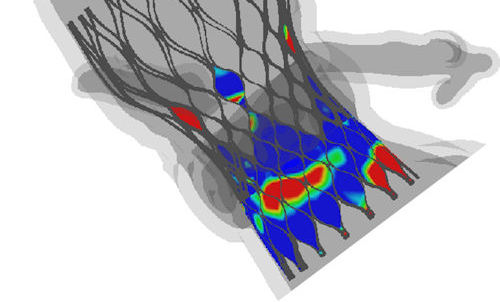 The heart is often compared to a pump, facilitating the flow of blood between its upper and lower chambers. The heart’s valves, which open and close with each beat, regulate the pressure and course of blood throughout the body. Unfortunately, according to the American Heart Association, more than 5 million Americans are diagnosed with heart valve disease each year. It can occur in any single valve or a combination of all four, but disease of the aortic and mitral valves is most common.

According to the University of Maryland Medical Center, up to 1.5 million people in the U.S. suffer from aortic valve disease. The aortic valve controls the movement of oxygenated blood from the left ventricle into the aorta, the main artery leading to the rest of the body. Without an aortic valve replacement (AVR), 50% of aortic valve disease sufferers will not survive more than an average of two years after the onset of symptoms. An estimated 85,000 surgical AVR procedures are performed every year in the United States. For patients deemed too old or ill to undergo AVR through traditional open-heart surgery, transcatheter aortic valve implantation (TAVI) is a growing alternative approach. It is much less invasive, as it avoids cardiopulmonary bypass, and requires less time and anesthesia than a major surgical procedure. TAVI involves inserting a catheter, usually through the femoral artery in the thigh, which is then threaded into the heart, where it inserts a replacement valve inside the native (original) one. This replacement valve is mounted upon a dedicated endovascular prosthesis or stent.

Even with the much less-invasive TAVI approach, complications can still arise. During the deployment of the device, particles of calcium can break away from the aortic wall, travel to the brain and cause a stroke. Calcium deposits on the original valve may also shift toward the origins of the coronary artery, and restrict blood flow to the heart muscle. Another potentially serious complication is regurgitation, which occurs when the new implant does not seal completely against the aorta walls. The resulting leakage allows blood flow along the sides of the device when the aortic valve is supposed to be closed. There can also occasionally be electrical conduction problems, requiring a pacemaker to manage the electrical current that travels over the heart and signals it to contract. “It was clear that these complications could be mitigated by further improving the TAVI designs and procedure planning,” says Matthieu De Beule, Ph.D., co-founder of Belgian-based FEops. For this reason, he adds, FEops developed its patent-pending TAVIguide technology—which aims at improving the design, planning, safety and efficacy of TAVI products and procedures.

Through a collaborative retrospective pilot study with Professor Peter de Jaegere from the Erasmus Medical Center in Rotterdam, Netherlands, FEops has compared the simulation results from TAVIguide with post-operative CT scans of patients who underwent a TAVI procedure. There was excellent agreement between the simulations and the post-operative data. “I believe this technology will have an important clinical implication,” says de Jaegere. “It will allow the selection of both the type and size of the valve for a particular patient. Such tailored medicine has the potential to significantly improve current TAVI planning and reduce complications.” De Beule agrees. “With simulation, you can gather so much more accurate information than using strictly simplified bench tests,” he explains. “Now you can gain a greater insight in regard to what stresses and strains these devices can withstand once they are deployed into an individual’s anatomy. The simulations can then predict the behavior of replacement valves during transcatheter delivery, implantation and even after new-valve function begins in a patient’s body.” Abaqus FEA has proven to be highly capable of replicating the complicated landscapes and methods of the TAVI procedure (see Fig. 4). “We have decades of experience using Abaqus specifically for minimally invasive cardiovascular and endovascular devices,” De Beule says. “Abaqus can accurately simulate the complexities of the TAVI procedure and products, which allows us to be very confident in the results.” While at press time, TAVIguide is still awaiting CE marking (the European equivalent of approval from the U.S. Food & Drug Administration) before it can be used in clinical practice, De Beule predicts this technology can be applied to a wider range of innovation. “Our simulation framework can also help medical device designers consider a variety of new cardiovascular products in realistic and validated patient anatomies early on in the pre-clinical state of development, paving the way for virtual clinical trials,” he concludes. More Info FEops