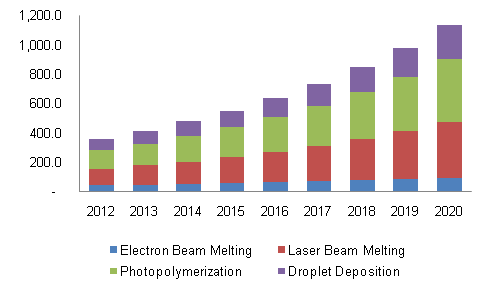 The global healthcare 3D printing market is estimated to grow at a CAGR of 15.6% from 2014 to 2020 according to a new report from Grand View Research.

According to the report, government initiatives to develop healthcare infrastructure and rising investments for R&D are some of the factors driving growth. The ability of the technology to reduce the risks involved with anaesthesia during prolonged surgeries has also increased demand. The market is estimated to be worth USD $1.13 billion by 2020. 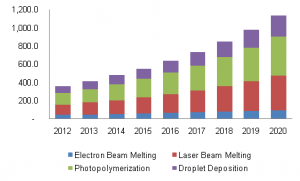 Polymers accounted for 35% of the overall market share in 2013, and were primarily used in bio-model printing.

Ceramics were commonly used for manufacturing tooth or mandible (jaw bone) implants.The ceramics market is expected to grow at a CAGR of 15.6% over the forecast period.

Implants accounted for over 60% of the global market in 2013. Photo-polymerization technology, used by research organizations to produce accurate and efficient bio-models, was valued over USD $140.0 million in 2013. However, laser beam melting is estimated to grow at a CAGR exceeding 16% from 2014 to 2020, making it the fastest growing segment. It is mostly used for producing orthopaedic implants.

North America accounted for over 35% of the global revenue. Rising awareness among patients, mounting investments for dedicated R&D facilities, advanced healthcare infrastructure and development of 3D printing-based products are expected to drive demand in the region over the forecast period. Demand in Europe will expand rapidly over the forecast period, as will demand in the Asia-Pacific region.

Resarch & Markets has also added a new report “Global Healthcare 3D Printers, Applications, Products, Services & Ancillary Market Assessment & Forecast: 2015-2019.” According to the report while 3D printing hardware accounts for 16% of the North American market, healthcare 3D printing hardware is expected to be much higher at 24.2%. That is being driven by high demand for printed surgical guides.