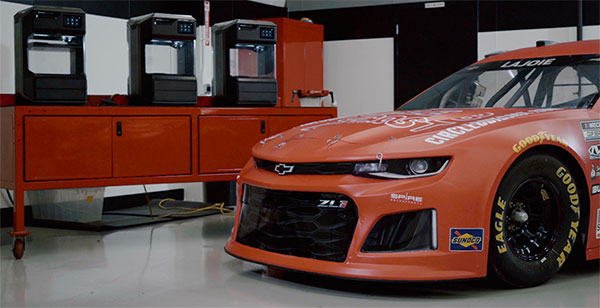 With three METHOD X 3D printers available, the Spire Motorsports team continuously prints parts that they need, without having to outsource or purchase from other vendors, teams, or companies. Image courtesy of MakerBot.

Spire Motorsports, a newcomer in the NASCAR Cup Series, has been on the scene since 2018. Racing the #7 and #77 cars, Spire Motorsports has been making good use of its collection of MakerBot METHOD X 3D printers.

“What’s really powerful about METHOD X and 3D printing, in general, is if you need something made and you need it made quickly, it’s ready to go,” says Ryan Kelly, engineer at Spire Motorsports. Kelly oversees the team’s 3D printing activities, in addition to his role as a trackside support engineer and engine mechanic.

With three METHOD X 3D printers available, the team continuously prints parts that they need, without having to outsource or purchase from other vendors, teams, or companies. The printers are used regularly throughout the week, 3D printing anything from race car parts and support equipment to impromptu requests from other departments at the team’s parent company, Spire Sports and Entertainment.

“The machines are instrumental to our ability to get things done in a timely fashion, as well as be able to replace parts on-demand. That’s something that is a huge benefit in having the MakerBot METHOD X,” adds Kelly. “Having METHOD X to be able to make a part, designed the exact way that we need, is critical to getting things done in the shop.”

Spire prints with a mix of ABS, Nylon Carbon Fiber and PLA for a range of on-car parts, depending on its needs. Unlike traditional heavy materials like aluminum, steel or metal, typically used in their fabrication shop, 3D printing materials enable the team to print lighter weight parts while still maintaining the strength and durability needed for their cars. METHOD X is used for critical parts in the cockpit, under the hood, around the engine as well as outside of the car.

“There are printers out there that have the capability of printing pieces that can be seen on the cars. And that is something that will become bigger and bigger as we continue to move forward with additive manufacturing in the future. MakerBot and their machines like the METHOD X will be able to produce those pieces in the future. They will become part of what we do and what we use on the race cars visibly on a regular basis,” Kelly adds.

Some behind-the-scenes parts that the team prints include the ECU spacers, shifter knobs, filter housings, cooling ducts, as well as other parts for the cockpit. For interior aspects of the cockpit, the team uses ABS while in more extreme environments, such as underneath the hood, in the engine area, in the trunk, or around the track surface, the team uses MakerBot’s Nylon Carbon Fiber, which has strong physical properties and can endure higher heat situations.

Parts like the driver CO2 filter housing, which is part of the driver cooling system, are printed in ABS, PLA, or nylon carbon fiber. The ECU spacers, used to raise the ECU off the dashboard to make it more accessible to the driver, are also printed in ABS. 3D printing spacers opens up the ability to do offsetting or angled spacers for other purposes.

The cars’ alternator/power steering cooling ducts are printed in nylon carbon fiber. These ducts are attached to the end of hoses that run from behind the front bumper of the car, from the grill inlet, to the power steering cooler and the Alternator.

“The quality of the prints is tremendous. What we have found when we design something in our CAD software and then print on METHOD X is that the tolerances involved with the sizing and the dimensions of those parts and pieces are extremely accurate. What we design on the computer correlates extremely well with what is actually made on the printers. We’re talking about a thousandth of an inch—it is that accurate,” Kelly says.

The team utilizes MakerBot CloudPrint’s remote printing and on-camera features to manage and monitor prints, while away from the machines or the shop. It enables the team to track and ensure that the prints are going smoothly, while also letting them run interference should a potential issue arise.

The biggest challenge for race teams, like Spire, is having to outsource parts to be machined that can be easily and accurately made on a 3D printer.

“That’s the biggest benefit of having the METHOD X printers here—and the challenges that could potentially be faced without them. METHOD X allows us to be able to exploit those opportunities where we can gain performance in ways you wouldn’t think about normally,” he continues.

Another concern for Kelly is sustainability. Typically, machining parts can create a lot of material waste.

“You can buy a 4x8 piece of aluminum but only use 3-5 inches of it. Once you shave it all down, you have scrap metal left over. It can be reused and recycled but it doesn’t provide the same efficiency that a 3D printer can—where you can take the materials and build from the ground up, rather than taking something and cutting it down,” said Kelly.

Overall, the team has been able to utilize METHOD X as easily as a desktop 3D printer and print parts “as good, if not even better, than printers that are worth tens of thousands of dollars.”