Properties such as air and water permeability in woven fabrics, pressure drop in filter media, absolute permeability of digital rock models or thermal conductivity in gas diffusion layers are calculated with push-button ease.

Physical properties are computed with Math2Market's FlowDict and ConductoDict modules in GeoDict. Among others, properties such as air and water permeability in woven fabrics, pressure drop in filter media, absolute permeability of digital rock models or thermal conductivity in gas diffusion layers are calculated with push-button ease.

The LIR solver in GeoDict is the state-of-the-art solver to tackle flow and conduction simulations. LIR is a fast and memory-efficient iterative finite volume solver. This solver uses an innovative method, with an adaptive grid instead of a regular grid, that reduces the number of grid cells significantly. The pores are represented as differently sized rectangular cuboid cells and solid regions do not occupy computational memory. The pore space is coarsened in areas with slight velocity and pressure variations, while keeping the original resolution near the solid surfaces and in regions with quick velocity and pressure variations. 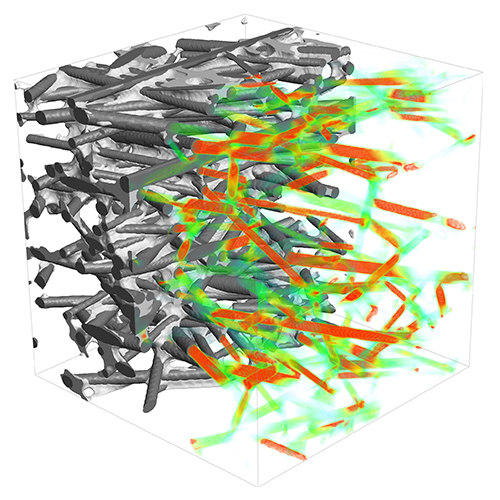 The heat flux of a thermal conductivity simulation on a gas diffusion layer (GDL) is shown in this image. Image courtesy of Math2Market.

The upcoming GeoDict 2019 outdoes previous releases. To solve diffusion and thermal and electrical conductivity, the LIR solver is now present not only in FlowDict, but also in DiffuDict and ConductoDict. To deal with complex direction-dependent conductance phenomena, isotropic, transverse isotropic, orthotropic and anisotropic constituent materials are available. To model the imperfect contact between two objects or between objects and its surrounding matrix, contact resistance is now taken into account by the LIR solver and the Explicit Jump (EJ) solver. The heat flux of a thermal conductivity simulation on a gas diffusion layer (GDL) is shown in the following image. Here, the LIR solver was used to compute properties on a structure made up of transverse isotropic fibers and isotropic binder.

The Multigrid method implemented in the LIR solver of GeoDict 2019 helps speed up computations and reduce runtime. The multigrid-LIR uses multiple coarser adaptive grids to speed-up convergence behavior but requires only slightly more memory than the conventional LIR solver. The multigrid-LIR solves the Stokes and Stokes-Brinkman equations in FlowDict, as well as diffusion, thermal and electrical conduction in DiffuDict and ConductoDict.