This new release from Pointwise includes the ability to customize the near-wall mesh for accurate and efficient boundary layer resolution. 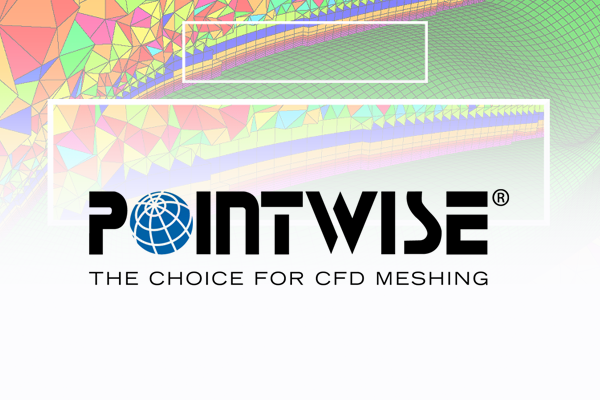 The boundary layer mesh for this X-38 spacecraft was customized using the new Growth Profiles capability. The boundary layer’s hexahedra begin with three layers of cells of constant height (magenta) followed by five layers with a growth rate acceleration of 1.1 (red, orange) after which the cells grow at a constant rate until isotropy is achieved. Image courtesy of Pointwise.

“Our involvement in several American Institute of Aeronautics and Astronautics (AIAA) workshops on CFD has allowed us to learn more not only about how boundary layers should be resolved with the mesh but also about the flexibility our customers need in prescribing boundary layer regions,” says Carolyn Woeber, Pointwise’s manager of technical support. “Based on what we learned from CFD practitioners and solver authors, we added a feature called Growth Profiles for rapid setup of the boundary layer meshing attributes for our T-Rex (anisotropic tetrahedral extrusion) technique.”

Growth Profiles provide a way to compute the meshing attributes for resolving laminar and turbulent boundary layers. Given three simple flowfield parameters, boundary layer theory is used to compute and apply the appropriate growth rate schedule for T-Rex. Advanced users can also create a completely customized cell growth schedule to meet the precise needs of their application that is built from spacing values, the desired number of constant layers, the desired number of accelerated layers and growth rate acceleration. Some of the technical details for this work can be found in the paper, “A Qualitative Study on the Effects of Mesh Guideline Modification for Unstructured Mesh Generation of the NASA High Lift Common Research Model (HL-CRM),” by Woeber and William T. Jones of NASA (AIAA paper no. 2018-3401).

The company's Pointwise software generates structured, unstructured, overset and hybrid meshes; interfaces with CFD solvers such as ANSYS FLUENT, STAR-CCM+, OpenFOAM and SU2 as well as many neutral formats, such as CGNS; runs on Windows, Linux and Mac, and has a scripting language, Glyph, that can automate CFD meshing.