HP unveils a series of partnerships and innovations to complement its new Multi Jet Fusion 5200 3D printer. Together the new partnerships and products make the 5200 the center of a volume printing solution for production 3D manufacturing.

The printer is the latest refinement of HP’s work in Multi Jet Fusion (MJF) printing technology, which prints on a line-by-line basis. HP says the method is inspired by its long history of 2D wide format printing, but relies on a variety of innovations for 3D. HP says MJF allows for faster cooling and increased automation of post-processing compared to selective laser sintering (SLS). MJF allows almost 90% of recovered powder to be recycled, compared to around 50% for typical SLS printers. HP says these features  allow for shorter lead times in production, by eliminating the need to have a full print bin to operate at peak efficiency.

Available with the 5200 are separate units that together make a complete volume production platform. There is the printer, a Build Unit, a Natural Cooling Unit and a Processing station. They can be enhanced further with third-party products designed specifically for the 5200 system from Hovmand (a forklift for the Natural Cooling Unit) and Girbau (a dyeing station). 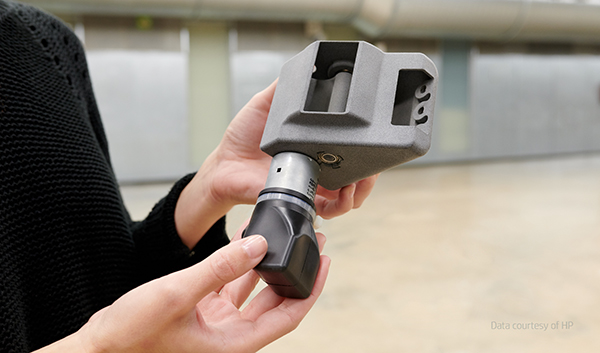 BASF has delivered a new certified thermoplastic polyurethane (TPU) for the 5200, Ultrasint. This TPU allows for flexible and elastic parts. BASF and HP are working with 3D printing services vendor Sculpteo on new applications for this material.

There is an innovation alliance with Siemens based on the Siemens Digital Enterprise software portfolio; a materials production alliance with BASF; and a software partnership with Materialise’s Build Processor and Magics 3D Print Suite. Updates to Autodesk Netfabb and a variety of Siemens PLM software applications also complement this new production ecosystem. 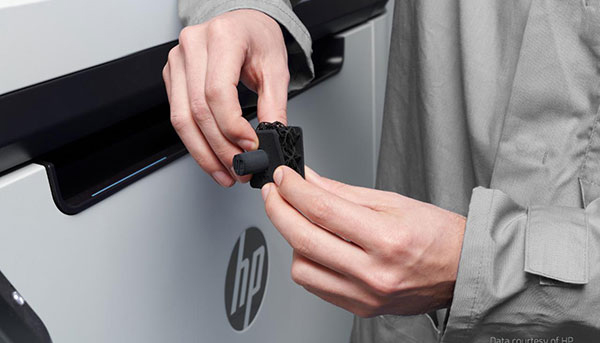 A new material for the 5200 from BASF allows printing of flexible elastic parts. Image courtesy of HP.

HP is leading the way with volume 3D printing for manufacturing—a build unit part in the 5200 is created using HP’s MJF technology.

See why DE’s Editors selected the HP Jet Fusion 5200 Series 3D Printing Production System as their Pick of the Week.