RTI Connext databus will be part of Baidu software stack for autonomous vehicles.

RTI Connext databus will be part of Baidu software stack for autonomous vehicles. 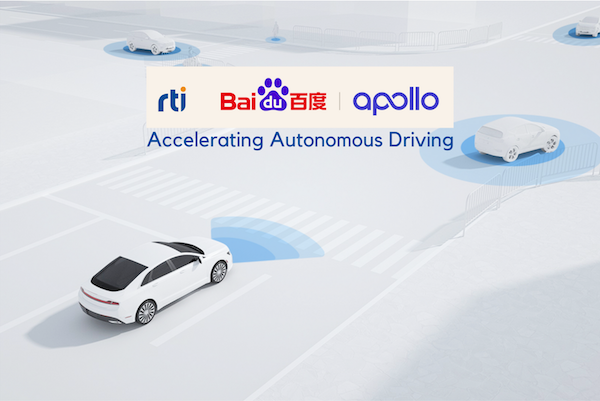 Real-Time Innovations (RTI), a software framework provider for smart machines, has joined the Baidu Apollo autonomous driving partner ecosystem. Apollo is Baidu’s open-source full-stack software solution for driverless vehicles. The partner program includes OEMs, Tier 1 suppliers, developer platforms and startups, and was formed “to accelerate the development and adoption of autonomous driving on the Apollo driverless operating platform,” according to the company.

“The autonomous vehicle market has experienced rapid growth in the last several years. We developed RTI Connext Drive to give our customers and partners the tools to solve complex autonomy challenges,” said Bob Leigh, Senior Market Development Director, Commercial at RTI. “In joining the Apollo ecosystem, we are looking forward to conquering the challenges hindering autonomous vehicle deployment and adoption as we move into the next phase of autonomy.”

“What we provide is a communication framework for integrating software components,” said Rajive Joshi, principal solution architect at RTI. “You can put any business logic into those components, and they can be written in any programming language. You can imagine a number of components going into our databus, and our platform’s job is to figure out where that information should go.”

In autonomous vehicles, the speed and accuracy of that information hand-off is critical. “Our partners are building systems where the right answer delivered too late becomes the wrong answer. Timing is critical,” Joshi says. The company’s solutions are utilized in other applications as well, such as hydroelectric power plants and robotics.

In autonomous vehicles, as the level of autonomy and complexity increases, the Connext databus has a larger role. “You can expand as you need to,” Joshi says. “You can scale in the number of data and the components from which you are receiving information. It’s a nice way of architecting systems.”

Joshi says that simulation plays an important role in autonomous vehicle development. “It’s cheaper to test with simulated data than to put cars on the road,” Joshi says. “Some use cases we are seeing in the development phase are quickingly testing and evaluating algorithms. In the Connext platform you can also record data and replay it, and there is a use case emerging where folks are taking a vehicle on a test drive, collecting real-world data and then replaying it to test algorithms against it.”