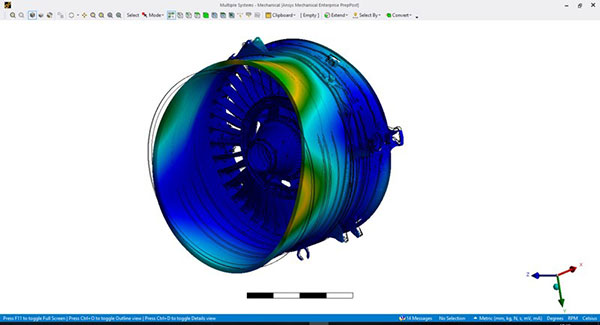 Example of Ansys Mechanical FEA software for design and validation in use. Image courtesy of Ansys.

Safran Aircraft Engines will deploy Ansys Mechanical FEA software for design and validation in the CFM RISE technology Program, which is driven by the worldwide aviation industry commitment to achieve net zero carbon emissions by 2050.

“Ansys' best-in-class simulation software and deep understanding of the challenges of our industry will enable us to support our engineers to develop sustainable technologies for our future aircraft engine programs,” says Michel Brioude, vice president of engineering, research, and technology at Safran Aircraft Engines. “By leveraging Ansys' tools, Safran Aircraft Engines will benefit from improved usability, a streamlined workflow, and a set of technologies that enables scalability and optimizes our research and development process through virtual prototyping.”

Ansys will offer technical support to Safran Aircraft Engines as they integrate the software in current and future developments.