BETA transformed the Simulation and Analysis world by introducing revolutionary automated software tools and practices into CAE for the Automotive Industry, almost 30 years ago. Committed to its mission to enable engineers deliver results of high value, BETA continues to offer state-of-the-art, high-performance software and best-in-class services, expanding the deployment of its software to numerous industries such as, the Automotive, Aerospace, Defense, Biomechanics, Electronics, and Energy.

The groundbreaking technology, the excellent services, and the high standards of business values and ethics are the three pillars on which BETA was founded and grows since then.

BETA is well known for its flagship suite, which comprises KOMVOS SDM-console, ANSA pre-processor, EPILYSIS FEA solver, META post-processor, and SPDRM, the simulation-process-data-and-resources manager. The company’s product line is complemented by the newly introduced RETOMO, a software that transforms CT-scan images into tessellated 3D-models, and NEERE, the remote working and collaboration platform that brings together everyone, anywhere at any time. 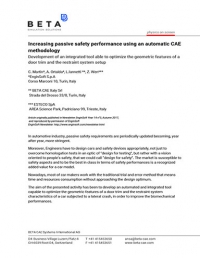 BETA CAE Systems in the News