Generative design—AI-like software that can suggest the best geometry for a project—seems well on its way to reshape the design software sector. But where it is heading?

Adding manufacturing constraints as generative input means the software will consider, in addition to the assigned material properties and stress loads, the practical needs of certain manufacturing methods, such as milling or 3D printing.

A strategy adopted by a leading software developer, this represents the general direction of generative design not just for Autodesk but for the design and simulation software industry itself.

(A live streamed version of the AU 2018 keynote is available below.)

In a company blog post, Fallon describes the company's vision. “We see the convergence of design and manufacturing as the inevitable—and beneficial—future of making products. We see our customers embracing this evolution and, for our part, we’re pushing to accelerate it,” he says.

Because the computer-proposed topology is often impractical or impossible to be manufactured, designers using generative design have to spend time and effort refining the geometry in CAD. Additional support for manufacturing constraints reduce the rework, removing more barriers from large scale adoption of generative design.

Newer startups that focus on generative design, such as Frustum, have also taken a similar approach. For example, in Frustum Generate software Version 1.4, you can control the extrusion direction, which produces topology favorable to specific types of millings; and you can also prevent overhangs, which produces topology less prone to problems in additive manufacturing.

One of the highlights of this year's AU keynote was the presentation of the NASA Jet Proppulsion Laboratory's (JPL) concept lander, designed in Autodesk generative design.

The Autodesk-NASA collaboration gave the project team a chance to use generative design to explore structural designs, specifically for the frames and regions that hold the scientific equipment, Autodesk writes in a blog post. The final design was 35% smaller in mass compared to the original baseline design, the company states.

“We had developed a custom version of our software for high performance motorsports that enabled us to help our customers solve for multiple constraints at once. We then applied it to the problems JPL needed to consider,” said Mark Davis, the senior director of industry research at Autodesk. (Image below shows the NASA JPL lander as presented on stage at AU 2018, image courtesy of Autodesk PR.) 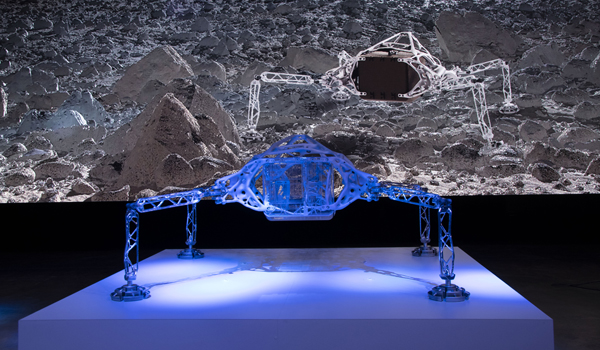 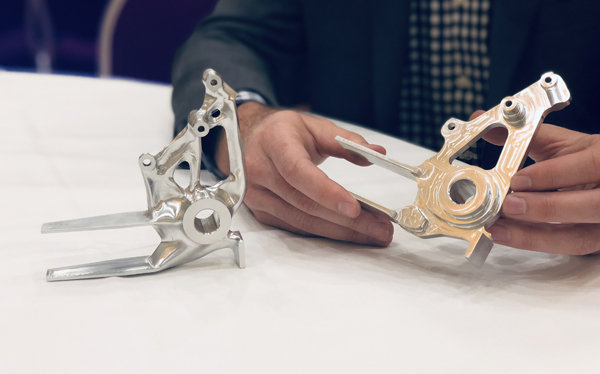 The first day of AU was devoted to Autodesk Forge, an application development platform that the company uses to create its own software stacks. In the recent years, the company has opened up Forge to third-party developers, hoping to create an app economy centered around Forge.

A manufacturing cloud would have an architecture that considers and facilitates manufacturing-specific needs. In his meeting with the press at AU, he further clarified what a “manufacturing cloud” is supposed to be. “When an event happens in the manufacturing process, it should trigger notifications that go to all interested parties and stake holders,” he said.

Forge as a development platform has attraced some on-demand simulation app developers, among others. One example is simulationHub, which offers a series of template-like web-based simulation apps for people with limited simulation software exposure or skills to run fairly complex structural and flow analyses.

In his meeting with the press, Autodesk CEO Andrew Anagnost pointed out, “This looks like something new, but it's not. If you look back to our beginning, AutoCAD's success was due to the fact that it made a great platform for third-party developers. So in a sense, we're going back to where we started.”

The company's flagship product AutoCAD, which still dominates the architecture and manufacturing industries as the standard drawing and drafting package, had an API that let others develop add-ons and plug-ins, fostering a thriving app economy centered around AutoCAD users.

If the company's bets and strategies pay off, Autodesk Forge, similarly, may become the centerpiece of a new app economy.

This year's AU drew more than 11,400 attendees, a 6.5% increase from last year, according to Autodesk press office.

Counting the views received for all industry keynotes in addition to the main keynote, the number rose to 392K views, the company reports.