DuraChain photopolymers leverage the Photo PIPs process to produce tough and resilient end-use parts while eliminating the need for a two-part resin. When illuminated during DLP printing, DuraChain materials phase separate into two parts at the nano level and then cure into a resilient, high-performing network that offers various benefits, Desktop Metal reports. DuraChain was developed by Texas-based Adaptive3D, which was acquired by Desktop Metal in 2021.

“DuraChain photopolymers signal a new era in DLP printing that delivers material properties that compete with thermosets in a long pot-life material,” says Ric Fulop, co-founder and CEO of Desktop Metal. “Parts printed with DuraChain resins are high performing in a wide range of temperatures and offer other important benefits that will quickly lead to new material innovations in DLP printing.”

Because Photo PIPS resins require more energy to cure and are relatively heavy compared to standard resins, they are challenging to suspend from a build plate during bottom-up DLP printing, according to Desktop Metal

Desktop Metal’s DuraChain materials will be printable on one of the additive manufacturing industry’s only top-down DLP systems, the ETEC Xtreme 8K.

A New Line of DuraChain Photopolymers 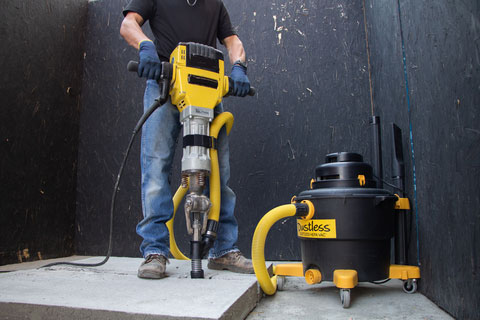 End-use products such as core components on the DustBuddie from Dustless Tools are being 3D printed domestically in DuraChain category materials. Image courtesy of Desktop Metals.

ETR is already being used to 3D print end-use parts. A case study showcases how Dustless Tools, a maker of construction and industrial vacuum systems based in Utah, uses the rugged ETR material to domestically produce its DustBuddie for demolition hammers. The rugged application requires the material to have high energy return, tear strength, resilience and other durability properties.