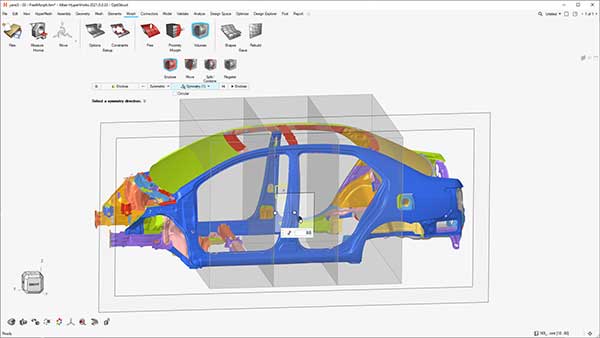 Altair says its 2021 update to Altair Simulation accelerates a variety of real-world performance issues, and includes new tools for simulating manufacturability and new functionality for electronics systems, including the use of 5G. Image courtesy of Altair.

The company says the new electronic design system toolset will allow engineers to fully collaborate on “smart, connected products” for all aspects of physical, logical, thermal, electrical and mechanical design. “This accelerates a variety of applications, from more efficient printed circuit board design review, verification, analysis and manufacture to the design of motors, sensors and actuators with simulation,” an Altair announcement states.

The company notes there is expanded modeling and visualization, including workflows that support the entire topology modeling and meshing process. Altair says these improvements cut the typical time on task from “hours to minutes” while offering a more sophisticated and realistic visualization.

Altair says this update allows advanced physics modeling that requires co-simulation of fluids and discrete elements, such as the simulation of particles in an air flow. Studies of the phenomenon of aeroelastic effects—such as aircraft wings—are now possible.

The company says the SimSolid toolset in Altair Simulation 2021 is now “ten times faster than its original release.”

“While the software quickly provides accurate simulation and optimization in one step, it does not require any expert knowledge,” says Anthony Reullierm, a digital simulation specialist and CAE leader at Renault. “No expertise in analysis is necessary and especially no meshing is required.”

Altair says it introduced the concept of “simulation-driven design for manufacturing” to the marketplace. In this release, Altair says it offers expanded functionality for casting, stamping, molding, extrusion and additive manufacturing processes. The company notes its software is being “increasingly used in process manufacturing during research, development and process improvement.”

For related resources pertaining to the new release, visit this site.