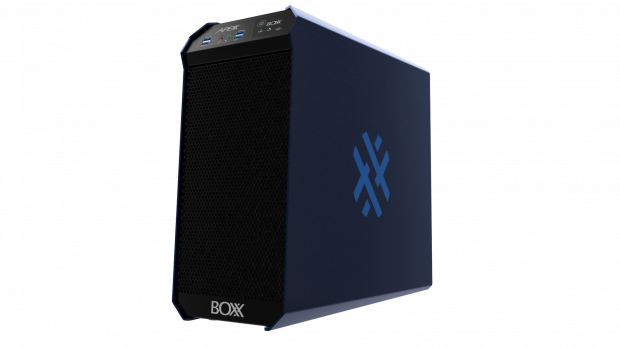 The BOXX APEXX SE is powered by a six-core Intel Core i7-8086K Limited Edition processor that’s capable of delivering up to 5.0GHz maximum turbo frequency. BOXX says that it has “professionally overclocked” the Core i7-8086K to reach and maintain that 5.0GHz clock frequency performance across all six CPU cores. Image courtesy of BOXX Technologies.

Forty years ago this month, Intel launched its 8086 CPU. The x86 series processors changed the computing game and, frankly, helped initiate everything since. Dig this: The 8086 had 29,000 transistors and a 5MHz maximum clock frequency. 5MHz as in 0.005GHz? Geez. Although much has changed since 1978, geeky kvetching about needing more speed has remained constant. Here's a fast read about a speedy workstation.

Backdrop: To mark the 8086's debut, Intel launched the 8th generation of its Core i7 processor series with the Core i7-8086K Limited Edition (LE) chip. It's Intel's first six-core processor with a 4.0GHz base frequency out of the box and its first processor to deliver up to 5.0GHz single-core turbo frequency. Dunno how many transistors, but billions suffices.

Anyway, BOXX snagged some of these CPUs and built its APEXX Special Edition (SE) workstation around it. Special edition also means limited quantities of this workstation will be built.

Yeah, yeah, Lockwood, what's the APEXX SE got for me? Your speed fix, especially if single-threaded applications like CAD, 3D modeling, animation or 2D image processing butter your toast.

See, BOXX applied its know-how in overclocking techniques to reach and maintain the Core i7-8086K LE's 5.0GHz maximum turbo frequency across all six of its cores. Faster clock speeds boost the performance of lightly threaded applications.

But BOXX also complements the overclocked speed with hardware that leverages the faster frequency, including your choice of high-level NVIDIA Quadro or AMD Radeon Pro graphics accelerators (as many as three), solid-state drives and up to 64GB of high-speed memory. The upshot: The APEXX SE should give you more time to design, create and innovate things to impress your corporate masters and clients. How much?

As an example, BOXX shared some internal benchmarks with DE. They put SOLIDWORKS to work on the APEXX SE and its similarly equipped sibling, the APEXX E2. The E2 workstation runs the Core i7 processor that serves as the basis for the overclocked special edition CPU. The results showed SOLIDWORKS performing 12.15% faster overall. The APEXX SE also had SOLIDWORKS turning in a 11.24% gain in rendering performance.

You can learn more about the 5.0GHz APEXX Special Edition workstation by reading today's Editor's Pick of the Week write-up then clicking on the supplied links. Make sure to hit the link to the cool interactive exploded view of some of the APEXX SE's key components. Actually, this whole workstation sounds cool.