The mobile scanner CultArm3D delivers 3D models of exhibits of various sizes at the push of a button, according to Fraunhofer.

The mobile scanner CultArm3D delivers 3D models of exhibits of various sizes at the push of a button, according to Fraunhofer. 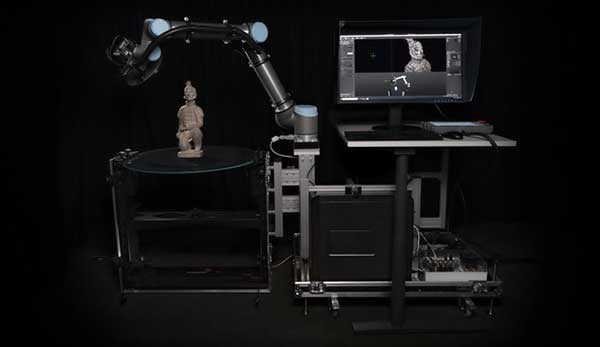 The Fraunhofer IGD in Darmstadt, Germany, has developed a product to make it easier for museums to digitize their collections and is now cooperating with Danish camera manufacturer Phase One, Fraunhofer reports. The mobile scanner CultArm3D delivers 3D models of exhibits of various sizes at the push of a button, according to Fraunhofer.

“3D models are tremendously important for research and can help improve our understanding of objects and their origins as well as analyze their attributes. They also serve as the basis for visualization in virtual and augmented reality, and when using 3D printing to create true-color physical replicas,” explains Pedro Santos, department head at the Fraunhofer Institute for Computer Graphics Research IGD.

For several years, his team and Santos have worked with large-format 3D scanning technology, especially in the digitization of cultural objects.

The product of the cooperation between the German research institute and the Danish camera manufacturer is the CultArm3D robotic arm. Equipped with a Phase One iXG 100-megapixel camera, Fraunhofer IGD's autonomous scanning algorithm and specially developed ring lights for optimal illumination, it automatically scans objects from every angle and generates detailed, high-quality 3D representations quickly.

The developers at Fraunhofer IGD paid attention to objects with challenging surface geometries, such as shiny or reflective objects made of gold or bronze with complex occlusions, according to Fraunhofer. All established standards and international recommendations were followed for not only system calibration (based on ISO/TS 19264 and VDI/VDE 2634) but also object metadata and digital model data (based on Europeana Data Model, 3D Task Force and CARARE), which ensures reproducible high quality in geometry, textures and color.

The scanning arm is easy to operate and can be done by museum staff without supervision. The built-in software guides the user through a quick calibration process during initial setup that only needs to be done one time when the system is first started. The only thing to do then is to place the objects in the middle of the included rotary table and press a button to start scanning everything else is fully automated. The museum also need not worry about its valuable exhibits: The design includes various safety precautions proven in the industry for protecting the objects being scanned. One example is a feature that automatically locks the joints of the scanning arm in place in the event of a power failure.

A quick preliminary scan establishes a basic grasp of the size and shape of the object. Dynamic viewpoint selection during scanning ensures that every detail of the object visible to the sensor is captured in true color and with optimal definition in the fewest number of images, the company says. Even challenging, reflective materials and complex geometric occlusions on the surface are captured.

For reflective surfaces, this eliminates the need to use a mattifying spray to capture their geometry. For complex object geometries, manual postprocessing of the 3D models is minimized or usually completely eliminated. The dynamic viewpoint selection continues until the user-defined quality targets for minimal coverage and resolution are achieved.

The final 3D model can then be output in various formats, such as in high-resolution 2D or 3D video, as a 3D web model, for virtual and augmented reality presentations, or as a print file for a 3D printer. All established standard 3D formats and many other output formats are supported.

There are two models of the CultArm3D for objects up to a meter tall and weighing up to 60 kg. Larger scan volumes and weights can be supported on request. The scanning arm is mobile, and its light weight makes it easy to transport. When on site, all it needs is a regular power supply, allowing it to scan collections at various locations.

Earlier development stages of the scanning arm are already in use at museums and archives, including the State Museum of Baden in Karlsruhe, the Thuringian University, and State Library at Friedrich Schiller University Jena and, soon, the University and State Library Darmstadt. In Karlsruhe, the Fraunhofer IGD scanner has been integrated into the visitor concept, allowing guests to scan museum objects in 3D under supervision and then see the results of their work for themselves on interactive touch tables or with VR glasses.

It has already been evaluated and used at The Getty in Los Angeles, the REM in Mannheim, the Museumslandschaft Hessen Kassel (MHK), the Saalburg and the Keltenwelt am Glauberg, where an array of collections was digitized in 3D. The feedback from these applications gave the developers valuable tips for improvements.

Videos of the CultArm3D in operation and a presentation of scanned objects are here.

Everything on 3D scanning research at Fraunhofer IGD is here.