This is the latest report from Jon Peddie Research on the GPUs used in PCs, reporting on the results of Q2'19 GPU shipments worldwide. 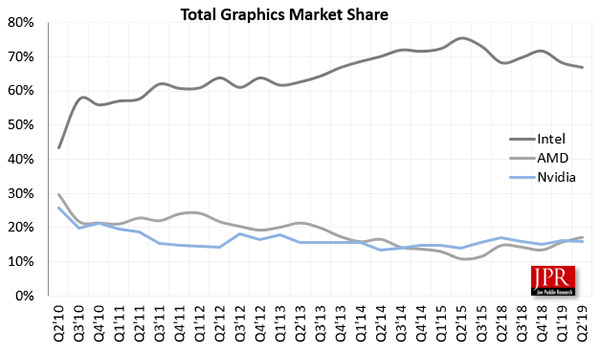 The PC GPU market sequentially increased by 0.6% in Q2'19, decreased year-to-year by -10.4%. This is the latest report from Jon Peddie Research on the GPUs used in PCs. It is reporting on the results of Q2'19 GPU shipments worldwide.

Even though there is uncertainty in the notebook supply chain, there has been a record number of new notebook announcements, and systems with notable specifications in performance, battery life and screen resolution, according to the report. Specialized notebooks that sit somewhere between workstations and enthusiast PCs are arriving on the market for creative professionals. Strong graphics subsystems are an important selling point for these machines.

In seasonal cycles of the past, overall graphics shipments in the second quarter are typically down from the previous quarter. For Q2'19, it increased 0.6% from last quarter and was greater than the 10-year average of -2%.

This quarter's shipments of total graphics processors (integrated/embedded and discrete) increased 0.6% from the previous quarter, which is a decline in the 10-year average historical rate of 0.9%. A total of 76.7 million units were shipped in Q2'19, which decreased by -8.93 million units from the same quarter a year ago indicating the market is negative on a year-to-year basis.

Q2'19 saw a decrease in tablet shipments from last quarter. The second quarter is typically down from the previous quarter; however, this quarter saw an increase.

GPUs are traditionally a leading indicator of the market, since a GPU goes into every system before it is shipped, and most of the PC vendors are guiding optimistically for next quarter, an average of 13%, the research group reports.