Bricsys will be fully consolidated, operating within Hexagon's PPM division.

Infrastructure and design technology conglomerate Hexagon AB has acquired the small but ambitious CAD developer Bricsys NV, maker of the .dwg compatible BricsCAD. The move gives Bricsys the resources it needs to build greater market presence for its alternative to the Autodesk AutoCAD ecosystem.

Announcing the acquisition was the first order of business at the annual Bricsys Development Conference, October 23 in London. Approximately 300 third-party developers, dealers, Bricsys and Hexagon staff, and press attended the annual event. The deal closed October 23. Hexagon did not disclose the purchase price, but did say Bricsys revenue in 2017 was approximately 13 million euros. Engineering software companies generally sell for 2x to 5x annual revenue, depending on factors that include user base, perceived value of technology, and potential synergy.

Bricsys, based in Ghent, Belgium, has known modest success in Europe and Asia, but until now has very low sales in North America, the home of its giant rival Autodesk. “Entering into the US market showed us we needed a bigger presence,” says Bricsys co-founder and CEO Eric De Keyser, who will remain chief of the Bricsys unit inside Hexagon. “We were worried about the longevity of our company.”

There is some unrest in the Autodesk user community over licensing requirements and the nature of required product portfolios. Outside North America, design companies have been more receptive of BricsCAD as an AutoCAD alternative. More than 1,000 third-party BricsCAD developers have sprung up in recent years, providing niche products for small markets.

“If they get it right, Hexagon can bring the sales and marketing resources that Bricsys needs to really disrupt the market,” says Dan Roberts, a senior consultant with Cambashi Limited, a Cambridge, UK engineering business analysis firm.

“This move will have a disruptive and lasting effect,” says Rick Allen, executive vice president of Hexagon PPM and president of the CADWorx unit. Hexagon revenue in 2017 was $3.4 billion, about a billion dollars more revenue than Autodesk. Bricsys will become part of the Hexagon PPM division, originally created with the purchase of Intergraph Plant Power and Marine. Autodesk and Intergraph were direct competitors in the 1980s in the early years of the CAD business.

Hexagon has its roots in measurement technology for manufacturing. It has become a major player in engineering technology in recent years through a series of acquisitions. Major brand names acquired include the former Intergraph PPM, MSC Software (CAE), Spring Technologies (CNC), AutonomouStuff (sensors for autonomy applications), and Multivista Systems (cloud-based construction visualization).

“Our customers can choose to remain on perpetual licenses and bundles they don’t need, or they can move to a superior workflow,” Allen adds in an apparent jab at the Autodesk transition to a subscription-only business model with preferred rates for portfolios over individual products. Bricsys sells its CAD with either a permanent use license with optional maintenance or on annual subscription with maintenance. Bricsys representatives on the main stage referred more than once to the “broken workflow” it sees in Autodesk portfolios as compared to the BricsCAD all-dwg environment.

CAD management consultant Robert Green added BricsCAD management consulting to his existing AutoCAD-based business in 2017, citing a strong demand from AutoCAD users for an alternative CAD environment. Green claims BricsCAD offers a superior return on investment when compared with AutoCAD, starting with first-year acquisition costs of $750 for BricsCAD Platinum and $1,600 for a first-year subscription to AutoCAD. Green says the three-year cost comparison works out to a $3,310 savings by using BricsCAD, “with ease of adoption, a familiar user interface, and low training costs.” 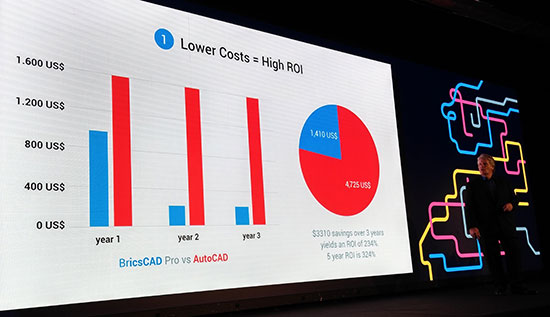 Autodesk cites immediate access to current and past versions of its software from any location, integrated collaboration built into its workflow, flexible IT administration and flexible term lengths among its subscription benefits.

BricsCAD supports 2D/3D general, mechanical, and sheet metal design as well as building information modeling (BIM), all using the .dwg file standard popularized by AutoCAD. It uses industry-standard Open Design Alliance (ODA) code as its geometry engine. In recent years Bricsys has added artificial intelligence utilities and other innovations not found in competing drafting products. The use of Open Design Alliance technology means Bricsys will be able to add version control to its software soon, a feature ODA is just now rolling out to members. 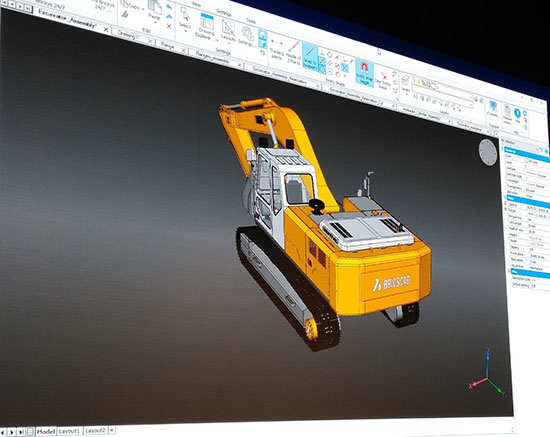 BricsCAD Mechanical, seen here being previewed at the 2018 Bricsys Development Conference, is due out later this year. It replaces existing add-on versions of BricsCAD for mechanical design. Image courtesy of Randall Newton.

With the release of version 19 later this year, Bricsys will introduce BricsCAD Mechanical, which replaces a previous add-on to BricsCAD Platinum for sheet metal design. New tools in BricsCAD Mechanical include exploded representations that automate most aspects of the exploded view process, extensions to the bill-of-materials (BOM) generation process, and automated kinematic animation. The software imports all major 3D CAD formats using an add-on utility (which will be rolled into BricsCAD Mechanical early next year), converting them to .dwg for continued editing. The solid modeling kernel is ACIS Modeler, developed and supported by the Spatial Technologies division of Dassault Systemès. AutoCAD uses a forked version of ACIS.