Choose the best hardware components for the design engineering work you do. 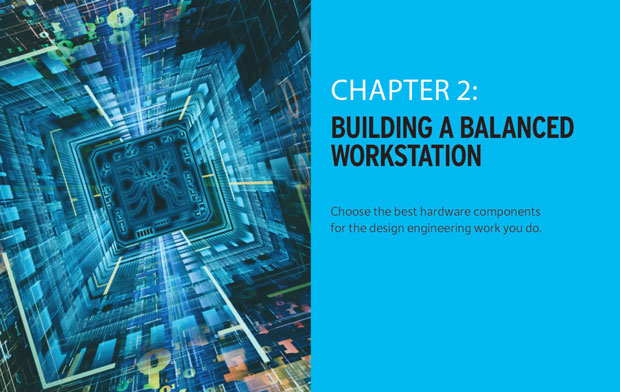 Editor’s Note: This is an excerpt from Chapter 2 of The Design Engineer’s High-Performance Computing Handbook. Download the complete chapter here.

Nobody likes a sluggish computer, but for designers and engineers, a workstation that gets bogged down means valuable design optimization time is ticking away. To keep engineers as productive as possible, companies need to invest in professional-grade workstations, but not every unit is created equal.

“The annualized cost of a high-end workstation on a two- to three-year refresh cycle is normally much lower than the annualized cost of a user’s CAD software, yet the correct hardware can have a profound impact on CAD user productivity, and the wrong hardware can bring productivity to a halt,” says Sean Young, worldwide segment manager, product development and AEC at HP.

How the HPC Handbook Works

The Design Engineer’s High-Performance Computing Handbook is a multimedia resource consisting of magazine article excerpts; the hpc.deskeng.com website that is full of videos, case studies and research; e-newsletters; and regularly released chapters that are free to download. Once you download a chapter, you’ll be alerted when new chapters are ready. Each chapter takes a detailed look at a computing topic important to design enigneers. The chapters include pictures, charts, definitions and links to additional information.

The HPC Handbook site is the hub of information for high-performance computing in design engineering. The HPC Handbook is available for download on the site, and the site is constantly updated to include the latest HPC educational resources that are pertinent to design engineering teams. It is divided into sections on Workstations, Clusters/Servers, Cloud Computing and Software, each of which contain the best information available on the Web from DE and beyond. Check it out at hpc.deskeng.com.

Intel’s Andy Parma, Workstation Segment Manager, says engineers should consider balance when considering a new workstation. “When a workstation is balanced, it provides excellent performance across four key elements: processor, memory, storage and graphics,” he says. “When these elements are in balance, workstation users can explore more ideas in less time.”

A modern high-end CAD workstation will have a multi core CPU, Hyper-Threading and a powerful GPU, along with a solid-state drive (SSD) instead of a traditional hard drive to speed data access. But the minimum hardware requirements recommended by software vendors don’t always apply to every machine. Not every workstation necessarily has to have the best graphics. And just throwing a lot of money at the problem in the form of multiple processors with lots of cores doesn’t guarantee performance improvements.

“Don’t spend a lot on one component and sacrifice in other areas,” says Scott Hamilton, Precision specialist at Dell. “In most cases, you get the most benefit from a system where all the components work well together. As long as you look at the workflow of your users and the applications they are using, you’ll wind up with something good.”

The types of applications you need to run will guide selection, as will determining what apps will be running simultaneously. Photo rendering and simulation have a big impact on hardware configurations, for example, along with the size and complexity of models and assemblies. How you plan to use the workstation will determine whether you’ll put your money into more cores, faster processors or more expensive GPUs.

“Put your dollars toward things that will directly impact performance,” says David Waters, head of industry alliances, professional graphics, at AMD. “That’s the biggest thing right from the beginning.”

If Not Now, When?

With all of the evidence in favor of workstation upgrades, why are many design engineers still limping along on three-year-old (or older) computers?

Some of it is budgetary. Those who hold the purse strings may not have bothered to calculate the quick ROI of an upgrade, or may not fully understand that engineers have different computing needs than their co-workers in accounting or sales departments.

Other reasons for keeping engineers from the computing power they need are cultural. People are comfortable with the status quo because they don’t know what they are missing. Some are reluctant to make a change during a large project — and there’s always a large project.

To get beyond the budgetary and cultural shortsightedness, look to the future. Models are going to continue to grow in size, and modern design software capabilities will continue to take advantage of the latest advances in computing hardware.

Over the last three years, those hardware advances include more productive computational and graphics processing via new architectures and more cores; faster memory speeds with error-correcting code memory that helps prevent data corruption; and the doubling of disk drive speeds thanks to SSDs. Virtualization — where one workstation can run multiple operating systems or be divided to handle different tasks — is becoming increasingly common, as is the use of multiple monitors.

“Processors, bus speeds, graphics cards and hard drives are all faster,” says Lenovo’s Tom Salomone. “Engineers may think that hardware is just a little faster or the same, but the truth is it all adds up to let them work much, much faster.”

Every expert DE spoke to noted that if you are putting together a professional workstation, then you’ll have an SSD instead of a spinning hard disk — preferably for both the boot drive and storage. For the price (only a few hundred dollars more than a spinning hard drive) you get a tremendous boost in performance.

For CPUs, speed is more important than core count if you’re running a CAD program. Look at single-thread performance instead of getting caught up in maximizing the number of cores. The number of cores is important as you add other applications, and particularly if you plan to do any simulation, analysis or photo realistic rendering work. Those are the applications that will take advantage of more cores because they are multi-threaded.

Buy a Lot of RAM

The good news when it comes to workstation configuration is that one of the most powerful performance boosters is also one of the cheapest investments: RAM. You need enough memory to avoid swapping hard drive space to store and retrieve active data. Not having enough RAM will slow you down, even with a fast processor.

The size and complexity of the models are the biggest considerations when it comes to GPU selection. The system should provide a 15 frames per second (fps) to 20 fps refresh rate; anything below that would look slow or clunky, although what level of performance is “good enough” is a subjective measure. If you can’t spend a lot of money on the GPU, you can also consider making adjustments to the design software. You can lower the level of detail in a model and get smooth rotation, it just depends on the comfort level the engineer has with that trade-off and how much detail is required. There are also mid-range cards available that can provide a lot of horsepower, even for larger models.

Another element that can drive GPU selection is the display. Most CAD and simulation software users have more than one monitor, a practice that improves productivity. If you have multiple screens, then you’ll need professional graphics card like the AMD FirePro or NVIDIA Quadro line that can easily drive multiple monitors. The Intel Xeon processor E3-1200 v3 Product Family supports up to three displays. Each display port is capable of driving resolutions up to 3840x2160 at 60 Hz through a DisplayPort and 4096x2304 at 24 Hz/2560x1600 at 60 Hz using HDMI.

Workstation configuration is always limited by the budget, and that means companies will need to make trade offs. Those trade offs should be based on application usage to get the most out of your hardware, software and manpower investments.