The NODE under the Blade’s Hood 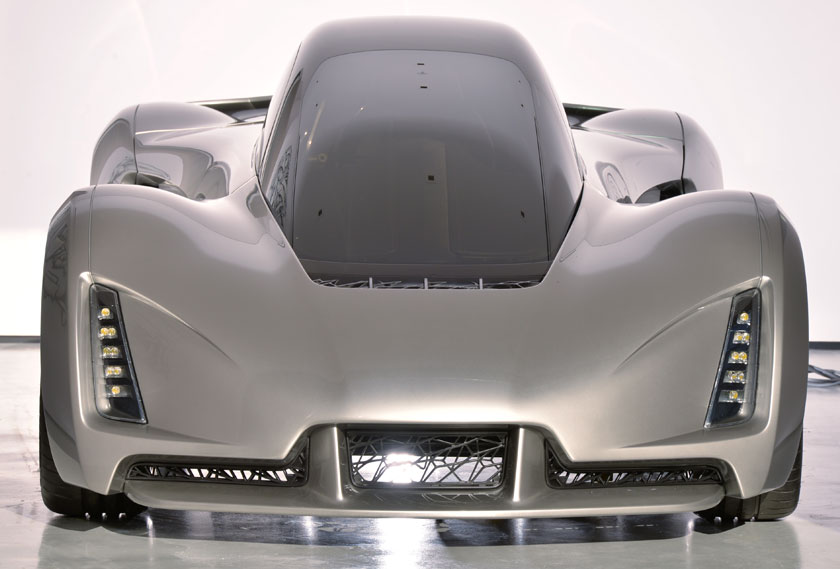 Most people think of low emission as the hallmark of a vehicle’s energy efficiency or sustainability. The perception led to many automakers and consumers to view electric or hybrid cars as the future, and a more conscientious choice. But Kevin Czinger, CEO of the Los Angeles-based startup Divergent 3D, thinks that’s missing the mark.

“Tailpipe emissions are just the tip of the iceberg. A far greater percentage of the emission comes from the manufacturing process—the mining, material and disposal,” he says.

With the development of the NODE system, Divergent 3D says they have found a better approach to automotive manufacturing—one that can lead to not only lighter cars, but lighter factories.

“If you actually do a lifecycle analysis—that is, to start from taking the ore out of the ground, then calculating the environmental impact all the way to the end, when you recycle the car—then an electric car is not that environmentally friendly,” notes Alex Teng, Divergent 3D’s environmental scientist.

“Electric Cars Are Not Necessarily Clean,” stated the title of an article for Scientific American (May 2016) by David Biello. The trend shifts the environmental burden to the “smokestacks at power plants that supply electricity to charge electric cars,” he pointed out. “But those smokestacks, many attached to coal-fired power plants, are the single largest source of greenhouse gas pollution in the U.S.”

With the development ofDivergent 3D’s NODE system, Czinger and his colleagues believe they have found a better approach to automotive manufacturing—one that can lead to not only lighter cars, but lighter factories.

Like most complex technologies, the NODE is rather difficult to define in a few words. “It’s a super-optimized 3D-printed connective tissue of a multi-material modular structure,” says Czinger. “Think of them as customized LEGO blocks.”

To demonstrate what other carmakers could do with NODE, Divergent 3D had to first build a car of its own. So it did. The outcome is the company’s supercar Blade. Not only is the car lighter than typical vehicles, it benefits from the use of additive manufacturing (AM) that bypasses some of the most energy-intensive factory operations, like fixturing, stamping, welding and e-coating, according to Czinger.

The appearances of the Blade, first at tech publisher O’Reilly’s 2015 Solid Conference and recently at CES 2017, generated a series of headlines dubbing the vehicle a “3D printed car.” That warrants some clarification. To be precise, the part of the Blade that’s 3D-printed is the chassis, not the entire vehicle. The NODE system, as described on Divergent 3D’s homepage, “[connects] carbon fiber structural materials that result in an industrial-strength chassis that can be assembled in a matter of minutes.”

Blade weighs about 1,388 lbs. (dry weight), its makers verified. That’s less than half the weight of a BMW i8 (curb weight listed as 3,394 lbs.). Because Blade’s chassis is assembled out of 3D-printed parts, the factory that made Blade weighs a lot less as well, in a manner of speaking. With the NODE system, “You’re replacing a billion-dollar factory with less than 50 million in printing and assembly equipment,” says Czinger. 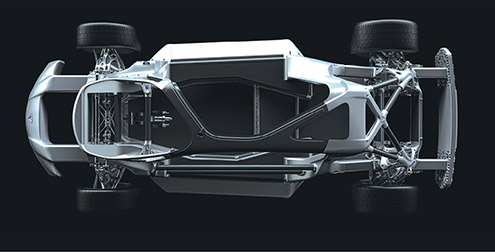 In Divergent 3D’s NODE system, the chassis is built using 3D-printed components that can easily be assembled. The process bypasses many of the typical tooling and machining steps required in auto-making. Image courtesy of Divergent 3D.

“NODE allows you to attach functional off-the-shelf materials and structures to one another to build 3D-printed geometry, enabling you to produce an automotive chassis without tooling,” says Thomas Bowden, Divergent 3D’s senior mechanical engineer. “But it’s more than that. With our design philosophy and the use of optimization software, we engineer into these NODES structural efficiency that you couldn’t achieve with typical tooling or wielding.”

The choice of materials is usually a key part of the automakers’ lightweighting strategy. According to Energy.gov, operated by the U.S. Department of Energy, “Advanced materials are essential for boosting the fuel economy of modern automobiles while maintaining safety and performance. Because it takes less energy to accelerate a lighter object than a heavier one, lightweight materials offer great potential for increasing vehicle efficiency. A 10% reduction in vehicle weight can result in a 6%-8% fuel economy improvement.”

“We focus on high-performance materials generally used in aerospace, like honeycomb paneling and carbon-fiber paneling,” says Czinger. “The performance of these materials has already been characterized, the standards have been cataloged and prices have already been driven down by adoption ... What we are able to do is very precisely bond all of the [3D-printed] parts very quickly, using an adhesive that’s derived from the aerospace industry.”

Divergent 3D recently struck up a partnership with SLM Solutions, which specializes in metal 3D printing and powder-bed fusion machines. Under the agreement signed in March 2017, the two companies plan “to develop specific hardware and software that will accelerate scaling of the patented Divergent Manufacturing Platform for cost-effective, high-volume production of vehicles.”

Scaling Down the Factory

Divergent 3D plans to offer its NODE system as a solution to automakers. Using its expertise, the company will implement the system for an auto manufacturer. In return, it plans to collect a royalty on the cars built using its system.

At least for one car maker, the Blade project is sufficient proof that the NODE is worth a try. In September 2016, the French automaker PSA Group signed a strategic partnership agreement with Divergent 3D to pursue “multiple joint-development projects.”

“This has the potential to dramatically scale down the size and scope of our manufacturing footprint, reduce overall vehicle weight and build complexity, while also giving us almost limitless flexibility in design output,” said Carlos Tavares, PSA Group’s chairman of the managing board, in the partnership announcement.

The NODE will typically be a part of the post-concept phase, after the initial design for the shape of the vehicle has been defined and established. “Within the small, compact package, we have to fit structural features that give it crashworthiness, chassis stiffness and meet the mass targets,” explains Bowden. “Once we have the basic outside shape, we can define design volumes for the front, back and suspension system attachment to figure out the optimal structure—to use the least amount of materials to give you the best results possible.”

In Czinger’s view, because the chassis is taking on the lion’s share of the structural and safety responsibilities of the vehicle, the process leaves a lot of room for creativity in the shape of the body. Therefore, if you wish, you can design a vehicle body in nature-inspired organic, asymmetrical geometry.

“The NODE system gives you unlimited freedom in how you interpret the optimized results,” says Czinger. “Crash deterrence is no longer the vehicle body’s function, so you have tremendous freedom. For example, you can use something like fiber-reinforced plastic.”

Before he joined Divergent 3D, Czinger was operating an assembly line in a factory in Harbin, China. During that time, he sent his 15-year-old son to work at the same place to learn the manufacturing process from the ground up. 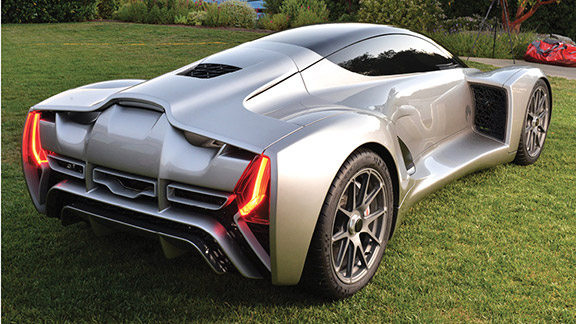 “For three months during summer, my son worked a shift that began at 6:30 in the morning,” recalls Czinger. “He’d wake up, then take the shuttle bus to the factory and work on the line just like everybody else.”

Industrial powerhouses like China, Czinger believes, are waking up to the need to reckon with the impact of large-scale manufacturing. “It’s an existential matter,” he says. “Their factories are built for scale, but way over-capacity. Yet, the industry trend is, the mass-produced car model’s value is going down, because there are now many more manufacturers and more people wanting niche vehicles. So a large factory that can’t scale down is actually polluting the environment and also destroying the capital.”