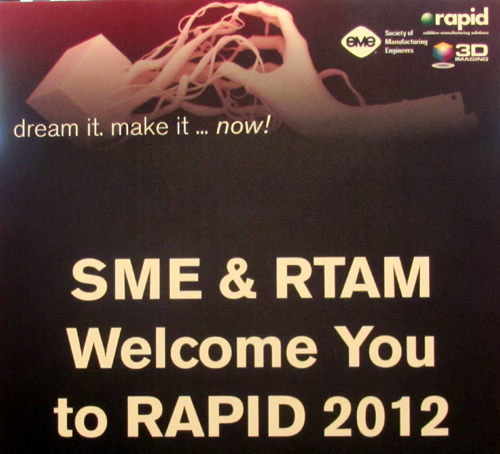 The show kicked off at 8 a.m. for the keynote address of the day. People shambled toward coffee and pastries, but managed to perk up a bit once the caffeine and sugar hit. Or maybe that was just me. I will have to add a correction here. I said that today’s keynote speaker would be Terry Wohlers. He’ll actually be speaking on Thursday.

Instead of Mr. Wohlers (much to my initial surprise) was Paul Doe, chief designer for Prodrive’s rally car program. Doe spoke about how additive manufacturing (AM) has changed the way Prodrive modifies automobiles. 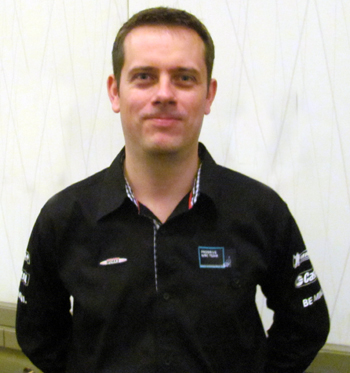 Prodrive begins work with a brand new Mini Countryman Cooper S. By the time the Prodrive team is finished, nearly every part of the car has be replaced or modified in some way. Prototypes made using AM allow the work to be completed more quickly and reduces costs. Watch Rapid Ready for a more detailed look at how Prodrive is using AM in the near future. 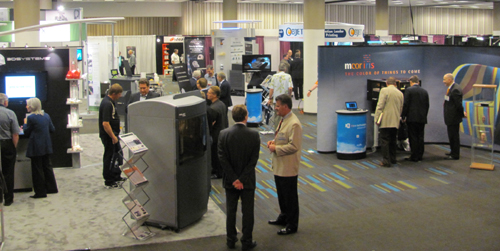 Following the keynote, the floor show opened its doors. Just under the tumult of conversation you could hear 3D printers quietly humming away. Stratasys was showing off its new printer, Mojo, and Objet had its newest offering, the Objet30 Pro on display. Maybe next year we’ll see just one booth with both printers sitting side-by-side.

The 3D Systems booth was busy with people ogling the new ProJet 3500 Series and the recently revealed ZPrinter 850. I was invited to have a look at the systems manufactured by ExOne and was suitably impressed with the capabilities offered by the S-Max. 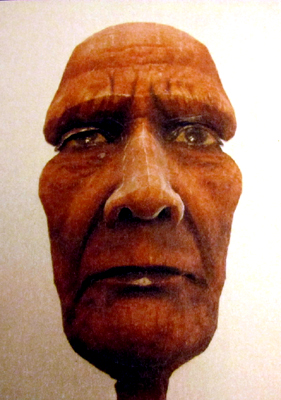 McCor Technologies made its first appearance across the pond, showing off the Matrix 300 and announcing a new AM system to be released in the fourth quarter of 2012, the Iris. The Iris produces 3D objects in full color, still using normal letter paper. According to McCor, the new printer was named after the goddess of the rainbow.

“We see full color as an essential offering to our customers – we think in color so our 3D parts should be in color,” said Dr. Conor MacCormack, Founder and CEO.

I look forward to covering the launch of the Iris, and not just because the fine people at McCor gave me a taste of Ireland in the form of a lovely glass of whiskey.

I was also able to catch up with a number of distinguished attendees to discuss AM. Among these was Ed Tackett, director of RapidTech. Tackett talked to me about the future of education for AM. Expect to see a full post about this important topic on Rapid Ready.

I’ll leave you with a video about the new Up Mini 3D printer.