RAPID 2015: Highlighting an Industry Coming into Its Own 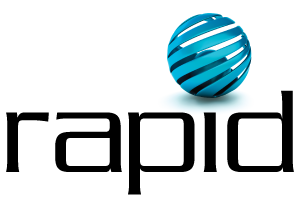 Attending a Society of Manufacturing Engineers (SME) RAPID conference gives one a strong desire to perfect the cloning process. You want to sit in on three talks simultaneously while spending at least eight hours a day on the trade-show floor, absorbing everything about additive manufacturing (AM). Now in its 25th year of SME sponsorship, the 2015 event attracted a record-breaking 4512 people (up 30% from 2014), with an excellent balance of newcomers and seasoned attendees.

Keynote speech topics were cutting-edge, from the challenges of 3D printing in zero gravity described by Jason Dunn, CTO of Made in Space, to the painstaking work of bioprinting materials that support drug development as explained by Dr. William Warren, vice president of Sanofi Pasteur.

Well-known industry consultant Terry Wohlers of Wohlers Associates said industrial customers and manufacturers will continue to form the bulk of AM’s adopters. His keynote speech, based on his 20th anniversary Annual Report on the state of the AM industry, covered topics ranging from HP’s entry into the AM world and the exciting possibilities for hybrid manufacturing systems, to the need for more metal AM units and the benefits found with personally customized products, such as insoles from Materialise.

Wohlers noted the AM industry has quadrupled over the past five years. These presentations made it clear that 3D printing/AM has officially stepped out of the “prototype-only” phase to take its place in the real world of “making,” however a particular end-user needs to define that term.

AM for Today and Tomorrow

Todd Grimm, president of T. A. Grimm & Associates, delivered a deluge of updates on the world of AM hardware and materials, 3D scanning systems and business-oriented software that helps users manage 3D printing. He also referenced work by Microsoft and its big-hitter consortium (founded with Autodesk, Dassault Systèmes, netfabb, HP, Shapeways and SLM Solutions) to further develop its 3MF file format as a possible replacement for the current STL standard.

Grimm stressed that designers should view AM as an alternative manufacturing technology, not a replacement for all traditional processes. Examples that demonstrate the many directions of innovation include continuous liquid interface production (CLIP) 3D printing by Carbon3D, arc-welding near-net-shape metal part production from +mfg and the large-print bed filament-based B.A.A.M system from Cincinnati Incorporated. He also said tooling, jigs and fixturing are applications that will see increased activity.

Presentations on materials were well attended and covered topics such as ceramics, reinforced thermoplastics, bones and precious metals. Brian Czapor, a research engineer at the University of Dayton Research Institute, gave a talk on the challenges of using carbon fiber filament to create replacements for aluminum tooling. Harald Lemke of NanoSteel discussed ferrous wear-resistant materials for AM based on induced nanoscale structures. And Dr. Elena Polyakova, COO of Graphene 3D Lab, explained how her company is developing a family of filaments including Black Magic 3D, whose graphene content supports combining both conductive and insulating parts on a 3D-printed object.

The rise of metal applications was an especially hot topic. Scott Dunham, senior analyst at SmarTech Markets Publishing, told listeners that metal AM systems are being placed at a higher than expected growth rate, with an 89% increase just in 2014 based on sales of almost 800 systems. (This figure includes sales of Optomec deposition systems.) His company sees a growing demand for systems that can handle volume production; however, a lack of standards is still holding these numbers down. Another point he made — echoed throughout the four-day RAPID event — was the need for integrated process monitoring. “Systems must capture operational data,” said Dunham, “There’s a huge untapped potential here to (better) analyze and control process parameters.”

For those who find themselves somewhere between confused and bewildered when shopping for a desktop 3D printer, Mireya Perez of the University of Texas El Paso presented an interesting mathematical model that generates a quantitative ranking for comparisons. Her group tested 45 systems and applied seven equally weighted factors to evaluating each unit and the quality of a standard 3 x 3 in. test part. (I would love to see this model expanded to include non-filament systems.)

A Taste of AM Vendor News 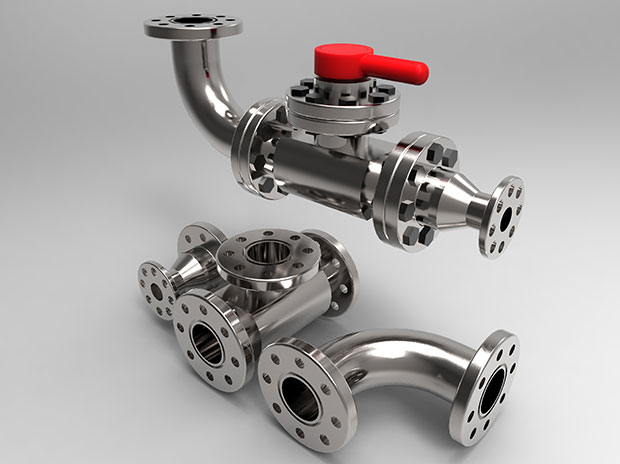 The size of the 3DP1000 filament printer from 3DP Unlimited is impressive, and its industrial capability is based on a 30-year history of expertise in XYZ motion control. With a 1.0 x 1.0 x 0.5 m. build volume, this open-software system offers single- or dual-extruders and can print with a wide variety of filament materials.

Additive Industries, the three-year-old Netherlands-based company announced the beta version of its modular, powdered metal/laser MetalFAB1 AM system targeted to industrial production. With inspiration and expertise from the semiconductor industry, Additive Industries has designed the MetalFAB1 to run on multiple materials with up to four lasers; automated powder removal and automated removal to heat treatment help address the goals of increasing run time and yields. Watch for the company’s companion product, the Application Software Platform, targeted to improve quality control of any metal AM system.

The SME Exhibitor Innovation Award went to Afinia3D for its H800 3D printer with 100 micron print resolution and 10 x 8 x 8 in. build volume. Judges said the product’s built-in HEPA filter, out-of-the-box operation for PCs and Macs, plus excellent customer support made it a clear winner.

The new Space Spider 3D Scanner from Artec 3D features upgraded electronics and an advanced cooling system; compared to the basic Spider model, this combination lowered the temperature needed for highest accuracy scanning results and dramatically reduced the warm-up period. Developed at the request of Made in Space, this model is ready for both earth-bound industrial use and a launch to the International Space Station.

Concept Laser’s booth didn’t have room to show its new X line 2000R LaserCUSING system, with its build envelope of approximately 32 x 20 x 16 in., but the redesigned multilaser M2 Cusing system was there. The self-contained system includes the water-flooded filter unit for improved safety and new process monitoring options. Reflecting LaserCUSING’s open architecture, work is in progress to allow users to determine even more operational parameters for optimizing builds. 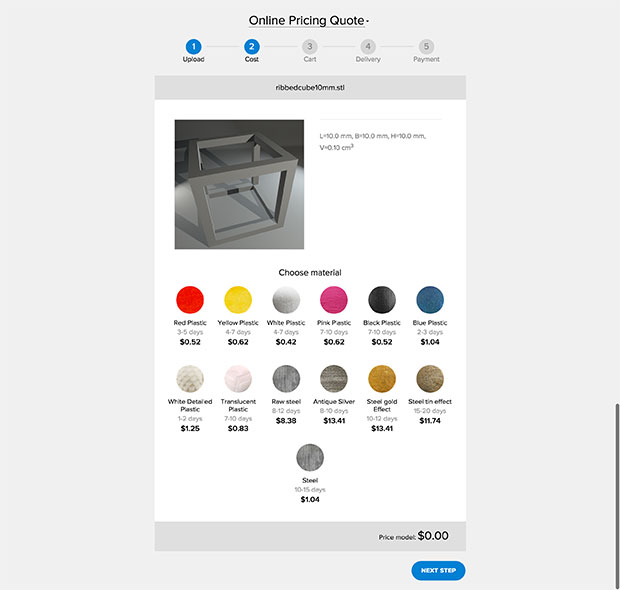 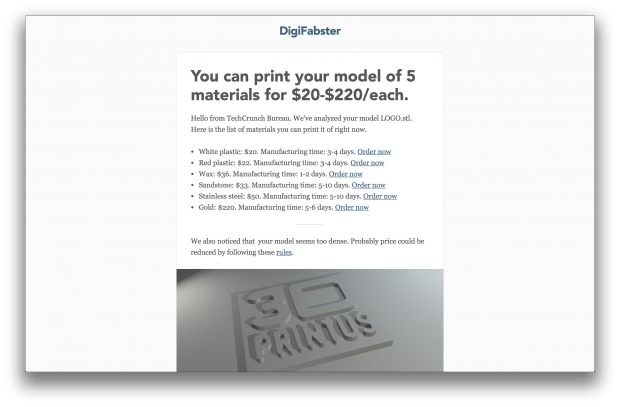 Visitors to the EOS booth saw a host of metal samples similar to those made on an M270 for GE’s recently tested, completely 3D-printed jet engine. Other intricate metal parts on display demonstrated the fine detail achieved with Micro Laser Sintering machines built by 3D MicroPrint, a joint venture between EOS and 3D-micromac, now in its second year.

Fabrisonic showed parts made with its non-melting consolidation process that can combine layers of disparate metals (plus ceramic fibers) at 30-40 in3/hour, including embedded electronics. The company is working on extending its process to build onto a cylindrically-shaped base, working outwards.

Solid-metal construction and precision engineering come together in the open-source German RepRap 3D printers. The company offers its filament technology in both a desktop X350 model and large-format (approximately 39 x 32 x 24 in.) X1000 commercial system.

HP is still being circumspect about its 3D printer product: very cool full-color parts were on display although no working unit was shown. The system is being developed at HP’s Barcelona large-format printing center and is still scheduled for release in early 2016.

RAPID newcomer Impossible Objects wowed attendees with its unusual approach to 3D printing (in development since 2009): a bonded-heated-compressed-sheet process called composite-based additive manufacturing (CBAM). Parts on display already include such materials as carbon, Kevlar and fiberglass, and are said to be almost ten times stronger than comparable parts made via SLS, FDM and SLA. The company won the RAPID 2015 Outstanding Innovation Award. 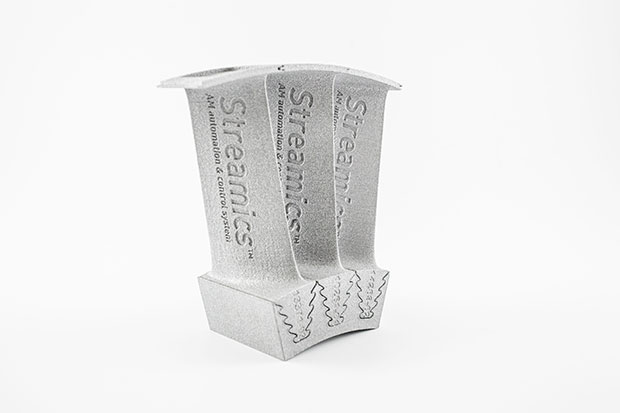 The Internet of Things is an increasingly hot topic for Optomec. Both new and existing customers are ordering its Aerosol Jet high volume 3D-printing systems to manufacture conformal antennas and sensors directly into connected devices; sales of Optomec’s LENS metal printing systems have seen equal growth this past quarter. Total Q1 2015 revenues have increased 100 percent compared to the previous year.

Stratasys had a full display of all its technologies on view, but a key message was the company’s belief, shared by others in this industry that the biggest market for AM parts is still emerging: producing tooling, jigs and fixtures in place, as needed, saving time and money across all industries and sizes of business. Stratasys also received the People’s Choice Award for Best Exhibit (the Iron Man suit helped).

Voxel8, partnering with Autodesk, brought a definite cool factor to RAPID, flying the quadcopter it had 3D-printed on its Voxel8 dual-filament-material desktop unit. The system deposits electrically conductive ink alongside various types of matrix materials such as PLA. Developer kits are now available for pre-order.