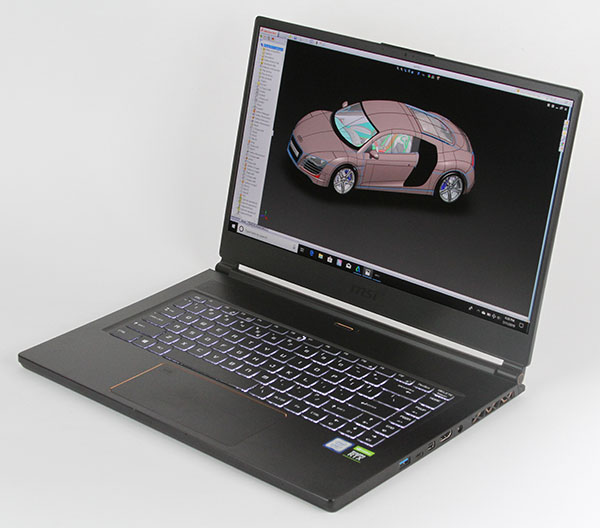 We recently reviewed the MSI WS65 8SK mobile workstation (see DE May 2019). But, when the Taiwan-based company offered to send us an updated version of that same laptop, we jumped on it. Why? The answer is simple: While other companies have announced support for NVIDIA’s new RTX graphics boards, MSI was the first company to ship systems that included one of these powerful graphics processing units (GPUs). 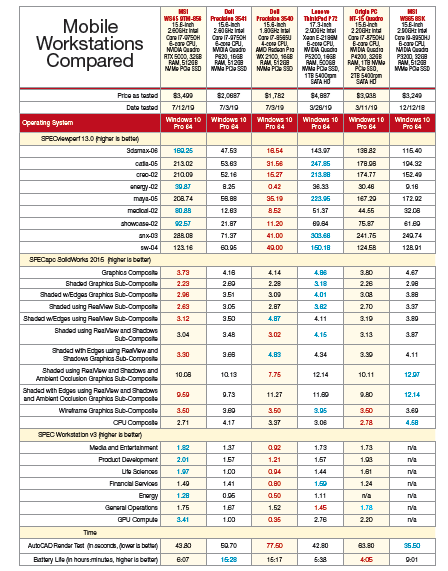 Unlike many other original equipment manufacturers, MSI does not offer custom configurations. Instead, the company sells pre-configured systems based on specific combinations of components. There are currently seven different configurations for this latest edition of the WS65 based on an Intel 9th-generation CPU. All use an HM370 chipset, include 32GB of DDR4 2666MHz memory installed using a pair of 16GB small outline dual-inline memory modules (SODIMM), and feature a 15.6-in. display backed by an NVIDIA Quadro GPU.

That configuration has a suggested retail price of $3,499, but since MSI only sells through authorized resellers who can set their own prices, the cost may vary.

The Intel Core i7-9750H Coffee Lake CPU has a maximum turbo speed of 4.5GHz, a 12MB cache and integrated Intel HD Graphics 630, with a thermal design power rating of 45 watts.

The big news is the inclusion of the latest NVIDIA Quadro RTX 5000 graphics card. This GPU has 16GB of dedicated GDDR6 memory, with 3072 CUDA cores, 384 Tensor cores and 48 RT cores. With its 256-bit interface and a bandwidth of up to 448 GB/s, the RTX 5000 achieves single-precision performance of 11.2 TFLOPS (teraflop; floating point operations per second), Tensor performance of 89.2 TFLOPS and can trace up to 8 Gigarays per second, while consuming a maximum of 265 watts.

Lifting the lid reveals the 15.6-in. display and a backlit keyboard with 84 keys. An oval-shaped power button is centered above the keyboard, with an adjacent LED that glows white when the system is powered on and using the Intel graphics, and amber when you use the discrete NVIDIA GPU.

A gesture-enabled 4x2.75-in. touchpad is centered below the spacebar. Although it lacks dedicated buttons, you can click in the lower-right corner to access right-click shortcut menus. A fingerprint reader is in the upper-left corner of the touchpad.

The right side of the case provides a USB 3.1 port, a Thunderbolt 3 port, a mini-DisplayPort, an HDMI port and the connection for the AC adapter. The left side of the case includes two additional USB 3.1 ports, a full-size RJ-45 network port, separate headphone and microphone jacks and a lock slot.

During our tests, the MSI WS65 9TM-856 remained cool and quiet. The four-cell 82WHr Li-ion battery—the same battery found in all MSI WS65 systems—kept our system running for just over 6 hours in our battery run-down test. Although certainly not record-setting endurance, it’s long enough to make it through most of a work day or a typical cross-country flight.

To say we were pleased with the performance of this new MSI WS65 workstation would be an understatement. On the SPECviewperf test, which measures pure graphic performance, the system turned in some of the best results we have ever recorded, and the best ever for a 15.6-in. system. 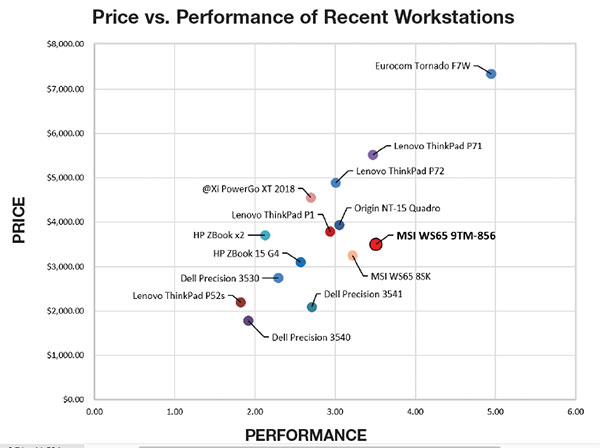 On the SPECapc SolidWorks tests, it turned in equally impressive scores. On the demanding SPEC workstation performance benchmark, the MSI WS65 9TM-856 also led the pack. And on our own AutoCAD rendering test, the 43.8-second average rendering time was quite good, although 8.3 seconds slower than the WS65 system we reviewed in May, which used a somewhat faster CPU.

MSI preloads Windows 10 Professional 64-bit on all of its WS65 mobile workstations and backs them with a 3-year warranty that includes a 1-year global warranty, two years longer than what now comes standard from major vendors like Dell and Lenovo.

MSI is clearly serious about being a major player in the mobile workstation market. The new MSI WS65 9TM-856 is a great, thin, lightweight, VR-capable system that delivers amazing performance at a very attractive price point.