The project's designers made the bike ready for a 700-mile trip from Las Vegas to San Francisco. 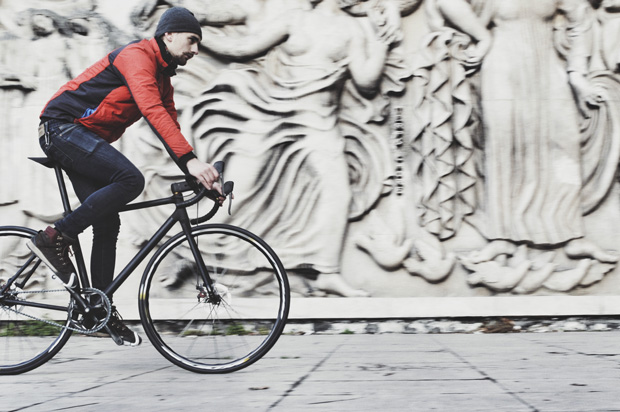 With advancements in 3D printing, it’s no surprise companies and consumers are finding ways to integrate it as a regular fixture within daily life, and finding functional applications for the technology. Recently, Sculpteo introduced its Darwin Bike Project: Designing and digitally manufacturing a bike to take on a 1000 km trip following this year’s CES show. Sculpteo designers Alexandre d’Orsetti and Piotr Widelka helmed the project, which was completed in seven weeks by using the company’s digital manufacturing services for 70% of the bike.

“We used several 3D printing technologies (SLS, DMLS, CLIP), inox, aluminum and leather laser cutting, and CNC for the mounting,” explains d’Orsetti in a Sculpteo blog post. “DMLS (direct metal laser sintering) in titanium was really new for us, and we had many interrogations on the results and the design constraints that were linked to this technology. The result was very impressive and it opened up a wide range of new perspectives to have access to finished metal parts! We also used the CLIP technology to 3D print elastomeric materials, which was also an exciting opportunity.”

Using a digital manufacturing technique offered a specific amount of modularity, d’Orsetti adds. Because final parts can be produced so quickly, designers were able to implement additional changes to the design throughout the entire process. It also let d’Orsetti and Widelka split up the bike’s design into different sub-sections to evaluate multiple materials and manufacturing processes. In addition to the various technologies deployed, both designers helped develop the company’s upcoming Sculpteo Studio software for design exploration and realization, which is being built this year.

“The bike evolves constantly and each part was modified, improved, adapted. Therefore, there were some days when we were gluing a frame, testing another one, designing new parts and adjusting everything while receiving elements of the bike. This gives to the project a sensation of perpetual evolution,” says d’Orsetti.

Following the bike’s completion, d’Orsetti and Widelka cycled from CES 2017 in Las Vegas to San Francisco with their design. This trip let the two gain feedback about their design, its performance and potential improvements.

Below you’ll find a video about the project and its assembly.