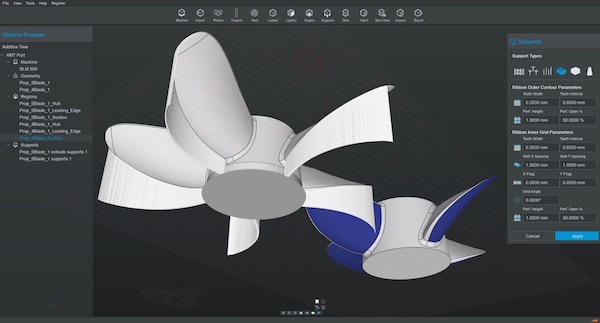 HP and Dyndrite have teamed on the new Universal Build Manager. Image courtesy of HP.

As more organizations embrace the use of additive manufacturing for both prototyping and production parts, it has been increasingly clear that new approaches will be needed to ensure part quality and reliability. Because of the nuances of different print technologies, there can be variations in final prints because of warpage, temperature, machine performance and other factors that can vary from printer to printer, and between print runs on the same machine.

3D printer manufacturers and simulation software vendors have responded by creating tools that can simulate the build process in advance, and other solutions that monitor prints in real time so that adjustments can be made to improve quality and reduce scrap.

These simulation tools and real-time monitoring, many of which were on display at the recent virtual formnext event, require new levels of computing horsepower as well. To take advantage of the possibilities of design for additive manufacturing, companies increasingly need to leverage faster, GPU-based resources on their workstations and HPC clusters for simulation.

“We are at a unique point in time where the manufacturing hardware has outpaced the software,” says Harshil Goel, founder and CEO of Dyndrite, which has developed a solution to streamline CAD-to-print processes, and is developing partnerships with major AM vendors.

Other companies have announced a variety of simulation and design-for-additive (DfAM) products that are targeted at improving the manufacturability of initial designs and to improve part quality via in-situ simulations.

Sintering is a critical step in powder metallurgy-based manufacturing processes, including binder jetting. It involves heating parts to near melting to impart strength and integrity, and typically causes parts to shrink by as much as 20% from their original printed or molded dimensions. During the process, improperly supported parts also face the risk of deformation, which can lead to cracking, distortion or require costly post-processing to achieve dimensional accuracy. 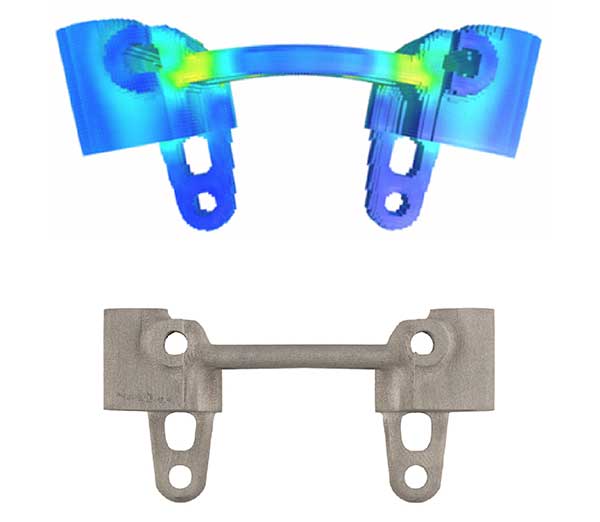 In the past, experts had to rely on trial and error to adjust for this shrinkage/distortion problem by creating supports or other adjustments in the part design. According to Desktop Metal, Live Sinter can minimize reliance on these manual adjustments without requiring users to be experts in powder metallurgy.

According to the company, Live Sinter results in near-net shape parts after sintering, achieving tight shape and dimensional tolerances while diminishing or eliminating the need for sintering supports. This means additive manufacturing engineers now have a software option for testing fast and predictable sintering outcomes. The company says simulation results can be ready in as little as 5 minutes and negative offset geometries in as few as 20 minutes.

Sintering simulation is a complex multiphysics problem that involves modeling how parts and materials respond to a number of factors, including gravity, shrinkage, density variations, elastic bending, plastic deformation, friction drag and more. Live Sinter runs on a GPU-accelerated multiphysics engine, capable of modeling collisions and interactions between hundreds of thousands of connected particle masses and rigid bodies. The multiphysics engine’s dynamic simulation is refined using an integrated meshless finite element analysis (FEA), which computes stress, strain and displacement across part geometries used to predict not only shrinkage and deformation, but also risks and failures, validating the feasibility of a part for sintering-based additive manufacturing before the build begins.

Live Sinter predicts the shrinkage and distortion that parts undergo during sintering, and automatically compensates for such changes, creating “negative offset” geometries that, once printed, will sinter to the original, intended design specifications.

HP announced its Universal Build Manager Powered by Dyndrite in October, which leverages the Dyndrite GPU-accelerated Build Prep and Management solution. The Build Manager is a process-agnostic tool that the company says can deliver CAd-to-print workflows including CAD import, patterning, nesting, labeling, support generation and slicing. The Dyndrite solution on which it is built leverages NVIDIA GPUs for computational acceleration and Python APIs for automation and workflow integration.

“Additive manufacturing has always had incredible potential to disrupt the global manufacturing market, but has been limited by the focus on adapting traditional manufacturing software to address the problems that are unique to additive manufacturing” says Ryan Palmer, Global Head of Software, Data and Automation, HP Personalization & Industrial Business. “We are working with Dyndrite to provide the necessary tools and infrastructure to enable additive at scale.” 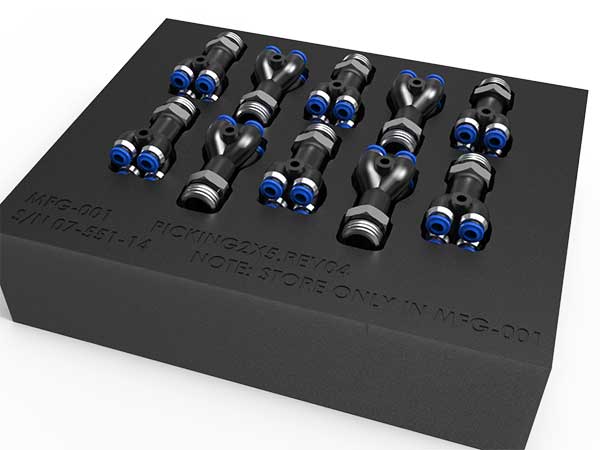 Stratasys and nTopology have teamed to automatically generate jig and fixture designs. Image courtesy of nTopology.

Stratasys has teamed up with nTopology to accelerate the design-to-print workflows through targeted manufacturing solutions. The first, announced in November, is the FDM Assembly Fixture Generator automates the design of jigs and fixtures and enables engineers to quickly turn a part file into a ready-to-print fixture with a simple drag and drop. It's available now via nTop Platform.

“As you can imagine, product performance prediction becomes increasingly important as additive manufacturing shifts from prototyping and design studies to the printing of functional components,“ wrote Aaron Frankel, Vice President of Siemens’ additive manufacturing software program, in a recent blog. “Therefore, the AM-enhanced durability simulation in Simcenter 3D Specialist Durability combines the power of both experimental data and physics-based modelling. We leverage Open Solver technology to calculate the durability performance of a structure, accounting for the key fatigue-influencing factors.“

The new tool is scheduled to be available by 2021. Siemens has also partnered with Sintavia, a metal additive manufacturer, to connect and automate additive processes to improve the efficiency of the design-to-print cycle.

Goel at Dyndrite, thinks that the next computing frontier in additive manufacturing will be pushing compute resources to the edge of the network, right down to the printers themselves. “The printers are increasing in size and in resolution, which means there is more data required to print,” Goel says. “Something needs to be in place at the point of manufacture to handle that data.”

As build volumes increase, the data required to create an object increases cubically. “This only gets worse as the machines grow in size,” Goel says. “The amount of horsepower needed for that data is increasing rapidly. People are also making more complicated things. You need a better and more sophisticated geometry engine to handle those more complicated things.”

That could mean the possibility of real-time, in situ operational simulations that can help improve print quality and predictability. “If you are able to compute and simulate a part before it has been printed, the likelihood of a successful print goes up,” says Shawn Hopwood, Dyndrite chief marketing officer and head of OEM relations.

“If you put a GPU in the machines, the printer is analyzing the part as it is being printed, re-simulating it and dynamically adjusting it,” Goel says.“That’s only possible when the machine itself is fast enough to compute.”

This migration to more robust simulation-led manufacturing is not limited to additive technologies. In November, Altair launched Altair Inspire Mold for simulating injection molding. The company says the solution can help users make better design decisions earlier, and optimize the manufacturability of finished parts. Altair leverages GPU acceleration across a number of its simulation and rendering solutions.

Manufacturability of new components can now be evaluated at the outset of the development process, and the risk of defects such as warping, sink marks, and short shots are mitigated before any costly investments are made in molds. The solution will eventually be integrated with the new Altair Material Data Center (MDC). Altair also offers manufacturing simulation for casting, forming, extrusion, and additive manufacturing.

Hexagon's Manufacturing Intelligence division has updated its machining simulation product, NCSIMUL, to address 5-axis machining instability by predicting the singularity point of the machine and then avoiding it.

“Singularity point analysis makes it possible to achieve the required surface quality for complex parts virtually, before going to the shop floor to cut the first part,” says Philippe Legoupi, product owner, Hexagon’s Manufacturing Intelligence division. “NCSIMUL also now simulates the performance of the target machine to evaluate when the 5-axis cutting factor is close to 100 percent, so that users can modify the stock orientation and position to achieve the desired feed rate. Armed with these two capabilities, manufacturers can now decrease 5-axis cycle times and achieve consistent quality for any part.”