Simulation for the Masses is AweSim

The Ohio Supercomputer Center (OSC) is forging ahead with a public-private partnership designed to bring affordable simulation services to small- and mid-sized companies.

Here’s a real boost for the concept of simulation for the masses: The Ohio Supercomputer Center (OSC), a regional center providing supercomputing services and expertise to local industries and university researchers, is forging ahead with a public-private partnership designed to bring affordable simulation services to small- and mid-sized companies.

The AweSim initiative delivers an expanding portfolio of simulation software through a cloud-based workflow and an e-commerce marketplace in an attempt to level the playing field and make simulation-driven design workflows accessible to smaller firms, not just industry titans with the deep pockets to afford the technology. For the first decade of its inception, OSC engaged primarily with private industry behemoths and university researchers on simulation projects, but the organization was falling short of its legislative mandate to empower what has been dubbed, “blue collar computing,” according to Alan Chalker, director of AweSim and director of Client Engineering at OSC.

Under Chalker’s direction, the group pitched the state on turning its simulation and technology knowhow into a commercialized platform upon which simulation software partners could develop and release variations of their products that would appeal to simulation and HPC newbies. The message resonated with both the state and potential partner ecosystem, and Chalker’s team received $6.5 million in funding and a three-year timeline to create the platform.

“Our goal is simple—we want more people to make use of modeling and simulation technologies that are normally unobtainable to them,” Chalker explains. “So many people look at computational science and modeling and simulation and don’t know where to start. They see it as an ivory tower endeavor. We want to provide access to this kind of infrastructure to everyone.”

The AweSim application library (Chalker calls them apps) are not sweeping simulation suites, but rather highly specific tools for solving a particular simulation problem for a particular industry. Along with the Web-based App Store, AweSim provides the supporting HPC and app delivery infrastructure, app development tools, and training and consulting services to interested companies. The partner-created apps are made available for sale through the Nimbis’ e-commerce App Store, which in turn accesses OSC’s HPC infrastructure as the HPC engine. 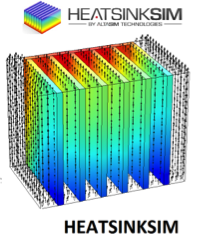 The HeatSinkSim app is the first of a series of Comsol Server apps developed by AltaSim Technologies made available on the AweSim platform. The app provides designers with the capability to examine the effect of heat sink design on thermal dissipation in power electronic components. Image Courtesy of AweSim

As Chalker describes them, the AweSim apps will integrate unique manufacturing domain expertise with simulation software and cloud-based computing and storage resources enabling smaller firms to embrace a digitized workflow and replace expensive physical prototyping with less expensive simulation. The apps are available on a pay-as-you-go basis, so companies are only paying for time spent doing simulation, and are not required to build out an HPC/simulation infrastructure.

Examples of current AweSim apps include a WeldPredictor portal that lets engineers simulate virtual welds, developed by OSC and the Edison Welding Institute (EWI), and a version of Comet Solutions’ SimApp simulation platform specialized for BWAY Corp, a provider of packaging solutions, developed by AweSim partner Kinetic Vision, an engineering service provider. AltaSim Technologies has also developed a HeatSinkSim app, designed to explore the effect of heat sink design on thermal dissipation in electronics components, and AweSim has licensing rights for COMSOL Server, which means anyone developing a COMSOL app can run it on the AweSim platform and still meet their licensing terms, Chalker says.

The target for AweSim apps are companies that recognize the value of simulation-led design, but don’t know where to start. While the initial pool will be regional, Chalker sees the service eventually serving a broader geography. “We’re not going to stop at the Ohio border,” he says.

To learn more about AweSim, check out this video.