HP’s latest Z2 tower workstation is entry-level in name only.

HP’s latest Z2 tower workstation is entry-level in name only. 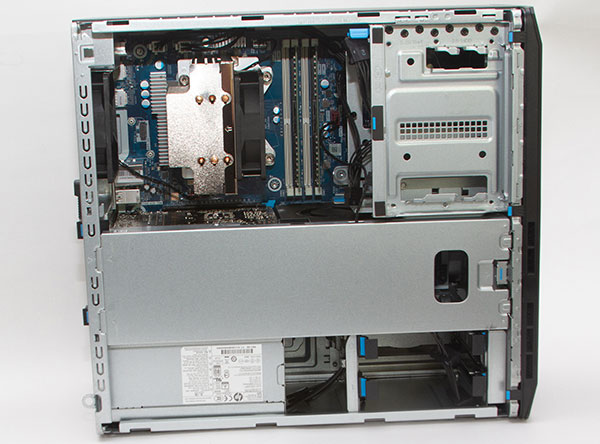 The company HP recently sent us one of its latest-generation Z2 Tower G8 workstations. Since it had been more than a year since we last reviewed a tower workstation and more than two years since we had tested anything other than a mobile system from HP, we jumped at the opportunity.

The Z2 is the company’s entry-level workstation and is available in several different form factors. We had previously reviewed the Z2 Mini compact workstation (DE, November 2018) and HP also offers the Z2 in a small form factor (SFF) configuration as well.

Although billed as an entry-level system, with a choice of 16 different CPUs—including the latest 11th-gen Intel Core and Xeon processors and support for PCIe Gen 4—the HP Z2 Tower G8 workstation offers plenty of power and a tremendous amount of expandability, making it a great choice for all but the most power-hungry users.

From the outside, the charcoal gray case shares many of the same aesthetics as other systems in the Z workstation family, with a small HP logo and Z2 badge discretely centered at the top and bottom of the front panel. The HP Z2 Tower G8 measures 6.68x15.5x14.12-in. (WxDxH) and our evaluation unit weighed just 17 lbs. 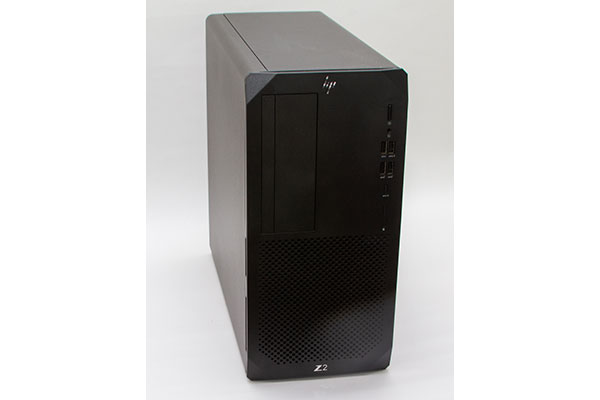 The front panel includes a small power button, a universal audio jack, four USB Type-A ports, and space for an optional USB Type-C port and an SD card reader. These are flanked by a pair of accessible drive bays, while the lower half of the front panel consists of a perforated screen hiding the air intake.

The rear of the case includes a pair of audio jacks, six more USB Type-A ports and an RJ-45 jack for the integrated gigabit LAN. There are also two DisplayPorts that connect directly to the integrated Intel graphics; these are not supported when the Z2 is configured with an Intel Xeon processor and are disabled by default when a discrete graphics card is installed. There is also space for an optional configuration port and serial port. A recess near the top serves as a handle when moving the computer.

The toolless chassis makes it extremely easy to access the very well-organized interior. After removing the side panel, the upper front section of the chassis includes the two front-panel drive bays; this cage can be removed to access portions of the motherboard hidden beneath. A large phase change heat sink with its own fan covers the CPU, with the four adjacent unbuffered dual-inline memory module (UDIMM) sockets easily accessible. Removing a metal stiffener spanning the depth of the case reveals four PCIe expansion slots: two PCIe x16 slots and two PCIe x4 slots. This stiffener also hosts a fan dedicated to cooling any boards plugged into these slots, with an additional fan located on the rear of the chassis. 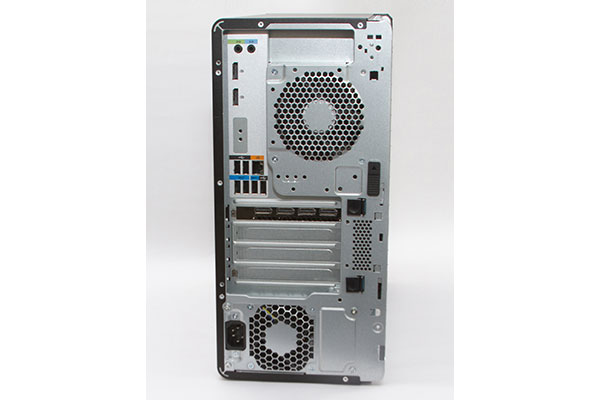 An internal drive cage, located in the lower front portion of the case, can host two additional internal drives, and HP offers 7200rpm SATA hard drives ranging from 500GB to 8TB. The power supply is positioned behind this cage, in the lower rear of the case. Again, HP offers three power supplies ranging from 350 watts (in the base configuration) to 700 watts (which added $46 to the price of our evaluation unit).

The HP Z2 Tower G8 workstation supports up to 128GB of RAM, using 32GB memory modules. At $1,218, the base configuration includes 8GB of RAM. The system we received came with 32GB, installed as a pair of 16GB 3200MHz UDIMMs, adding $410 to the base price. Error-correcting code (ECC) memory is available for systems equipped with a Xeon CPU.

A pair of M.2 sockets enable the Z2 to support up to 4TB of solid-state storage, and HP offers solid-state drives (SSD) ranging from 256GB to 2TB, including PCIe NVMe drives and HP Z Turbo Drives. While the base configuration comes with a 1TB 7200rpm SATA hard drive installed in one of the available internal drive bays, our evaluation unit came instead with a Samsung 1TB M.2 NVMe SSD, which added $545. By maximizing the M.2 and SATA capacities, the Z2 Tower G8 can host up to 30TB of onboard storage.

While the base configuration includes a 2.6GHz Intel Core i5-11400 6-core CPU, HP offers a choice of 16 different Intel processors, including Xeon CPUs. Our evaluation unit came with an 11th-gen Intel Core i9-11900K, an 8-core “Rocket Lake” 14nm processor with a 16MB Smart Cache and a thermal design power (TDP) rating of 125 watts. Although this CPU has a base speed of 3.5GHz and a maximum turbo boost of 5.3GHz, the K designation means it can be overclocked.

Although the base configuration does not include a discrete graphics card—relying instead on the graphics integrated into the CPU—HP offers a choice of GPUs from NVIDIA and AMD, and the Z2 Tower G8 supports up to two discrete graphics cards. One PCIe x16 slot in our evaluation unit contained an NVIDIA RTX A2000, adding $600. This virtual reality-ready GPU, based on NVIDIA’s GA104 graphics processor, has 16GB of GDDR6 ECC memory and features 6144 CUDA cores, 192 Tensor cores and 48 RT (raytracing) cores. Its 256-bit interface yields a bandwidth of 448GB/second while consuming 140 watts. Although a single-slot card, it requires more power via a six-pin auxiliary connection. The RTX A4000 provides four DisplayPorts.

We put the HP Z2 Tower G8 through our standard battery of benchmarks and were very impressed with the results. On the SPECviewperf tests, which focus solely on graphics performance, the Z2 did extremely well, easily outpacing systems costing thousands more on several of the datasets. 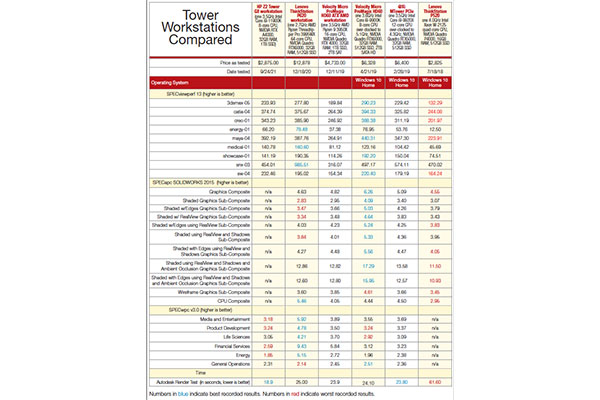 Its results on the very demanding SPECwpc workstation performance benchmarks, while less impressive, were still quite good, with even its lowest scores being just a few percentage points below those of much more expensive systems. And on our AutoCAD rendering test, which clearly shows the advantage of fast CPUs with multiple cores, the HP Z2 Tower G8 set a new record. With an 18.9-second average to complete our test rendering, the HP Z2 Tower G8 is the first system ever to complete this test in less than 20 seconds.

Throughout our tests, the HP Z2 Tower G8 remained cool and quiet, with fan noise barely ever audible over the ambient background sound level. HP rounded out our evaluation unit with a very good 104-key HP Premium USB keyboard and an HP Premium USB 3-button optical mouse. Although our system came with Windows 10 Professional preloaded, HP now offers Windows 11 Pro standard. Windows 10 is a $3 downgrade, or you can opt for Ubuntu Linux. 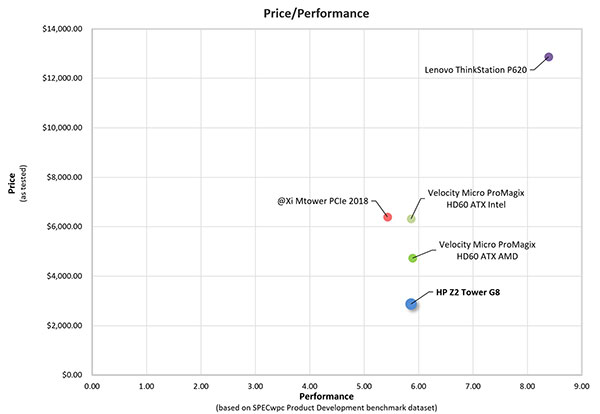 Like other HP professional Z-series workstations, the HP Z2 Tower G8 is independent software vendor-certified for professional applications from Ansys, Autodesk, Dassault Systèmes, PTC, Siemens and others. The system is backed by a 3-year warranty (with extended support options offered) and protected by HP Sure Start and other security management solutions. It comes with HP ZCentral Remote Boost (formerly known as Remote Graphics Software, allowing the workstation to be accessed by other devices for graphics-intensive work) and HP Performance Advisor.

As tested, our evaluation unit—with its Core i9-11900K CPU, NVIDIA RTX A4000 GPU, 32GB of RAM and 1TB SSD—priced out at $2,875, making the HP Z2 Tower G8 a great performing workstation at an amazingly affordable price. The HP Z2 Tower G8 ranks as the new price/performance leader and should meet the needs of a majority of DE readers.